Unlike the "Joe" in the name of the iconic Southern California-based grocery chain Trader Joe's, which represents a real person - founder Joe Coulombe - the "Joe" in Joe V's Smart Shop, the name of the new discount grocery store concept by Texas-based grocery chain H-E-B, is a creative fiction, designed to personalize the popular privately-held grocer's new warehouse-style discount format, the prototype store of which opened today at 12035 Antoine Drive in Houston, Texas.

H-E-B's Joe V's in Houston is no frills inside and out. The store's exterior (above) looks more like a barn than a supermarket. The store's interior (below) is no frills and utilitarian all the way: cement floors, warehouse-style shelving and basic signage. 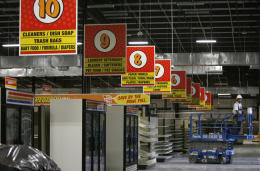 The Joe V's Smart Shop prototype store is 50,000 square-feet, according to H-E-B.

The premise and positioning of Joe's V's is no frills - it's discount all the way.

We’re Joe V’s Smart Shop and we never met a low price we didn’t like! From farm fresh produce and top quality meats to everything in between, we have what you need for less. That way you don’t have to shop around. We’ve already done it for you! What’s our secret to low, low prices? We keep things simple and pass the savings on to you. After all, you know a great deal when you see one. That’s why we have outrageously low prices on the items you use every day. So come get to know us. After just one trip you’ll agree, “Those who know…save big with Joe.”

It clearly communicates a focus on price-value. It also takes a shot at communicating that personalization aspect in the last line, referring to the fictitious Joe.

Keeping with that no frills, discount focus, Joe V's Smart Shop also offers a limited item selection: about 9,000 SKUs, compared to the 37,000 -to- 40,000 SKUs carried in the H-E-B flagship stores, according to the retailer. At 9,000, that's still a bit more than double the SKU count of small-format grocers like Aldi USA, Supervalu's Sav-A-Lot and Tesco's Fresh & Easy though.

The prototype discount market has all of the standard departments: dry grocery, perishables-dairy-deli, frozen foods, produce, meat-seafood and bakery. What you won't see in these departments at Joe V's though are the many upscale and higher-end items which H-E-B is known for offering in its flagship stores - and even more so in its very successful upscale-specialty format Central Market banner stores.

The new format's focus is on price-value: The discount price-value shopper is the target market for the fictitious Joe V.

In keeping with its no frills, discount positioning, Joe V's will have one of the first automated iCASH machines to be used in a U.S. grocery store. The machine, which H-E-B has been testing in some of its stores in San Antonio, Texas, allows customers to pay for their groceries using the self-service machine, while employees scan and bag their purchases at checkout. The iCASH machine accepts cash, debit and credit cards, WIC Vouchers and food stamps, all of which Joe V's is accepting. Joe V's also accepts manufacturers' coupons.

A key efficiency aspect of the The iCash machine, besides being a big time-saver, which equals employee labor savings, is it eliminates the need for employees to set up and balance the cash register tills through the day. The machine does that task automatically. The machines are used in a number of supermarkets in Europe.

Additionally, in keeping with the store's warehouse design style and shelving, all of the product to be shelved is brought out onto the floor on pallets, using a forklift. Hand stocking by store employees is kept at a bare minimum. This isn't a new concept. For example, warehouse formats like Food 4 Less and others have been doing it for decades. But it is labor-saving

An interesting note about the prototype Joe V's Smart Shop unit is that H-E-B owns the property where the store sits, along with the store building, and developed the shopping center anchored by it's first discount grocery market. H-E-B is in the process of leasing retail space it's built next to the store in the center.

The grocer also is leasing some space inside Joe V's to tenants. So far two are going in: Pronto Insurance and First National Bank, according to H-E-B. There's additional space available in the store for a couple others. 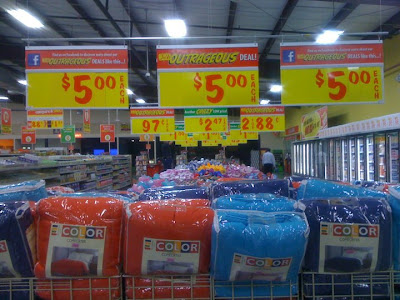 A key merchandising focus for H-E-B with Joe V's Smart Shop is on non-foods, general merchandise. For example, the Houston store is featuring the comforters pictured above for $5 each as part of its grand opening sale. The store is calling this promotional item, and some others, a "Facebook Deal" because it's promoting them exclusively on its Joe V's Facebook site. Notice the Facebook "f" logo on the signs in the photograph above, for example.

The store will offer lots of general merchandise, household and even durable goods items (comforters, clothing, electronics, yard furniture, ect.) on an in-and-out basis. We see shades of Aldi USA's "special buys" merchandising program in that regard, although it's important to note that numerous U.S. food retailers have used such merchandising long before Aldi set up shop in America. What makes it interesting regarding Aldi USA is it does so in a small-format box.

H-E-B is kicking off the Cinco de Mayo grand opening of its Joe V's Smart Shop store today by offering some hot promotional items in its advertising circular. Some of those items include: bananas at 3 pounds for $1; sweet corn at 8 ears for $1; chicken breasts for 67 cents pound; and assorted 16 ounce cans of vegetables at 3 cans for $1. [You can view the ad circular here.]

It's no accident, in our analysis, that H-E-B's opening of the first Joe V's store, in what could become a no frills, discount grocery chain, comes at a time when small-format, hard-discount Aldi USA is barnstorming its way throughout parts of Texas, opening numerous stores. Take a look here at Aldi so far in Texas. It's just getting started.

H-E-B has said Joe V's Smart Shop isn't a response to Aldi entering Texas. And since the first Joe V's is in Houston, where Adi has yet to open any of its hard-discount stores, we take H-E-B at their word on that - at least from a geographical standpoint.

But it only makes sense that at least a significant portion of Texas-based H-E-B's motivation in creating Joe V's would come from competitive concerns over Aldi's entering the state. In fact, if this isn't part of its motivation, we would be stunned, since H-E-B is one of the best and most competitive grocers in the U.S.

There's also significant and growing overall competition, including in and from the discount segment, in Texas - particularly in the Dallas-Forth Worth, Houston and Austin market regions - with more to come. The state is fast-becoming one of the most competitive food and grocery markets in America - from the discount format and mid-range segment, to the upscale and natural-organic format and segment.

The grocer is very successful with its H-E-B banner supermarkets and upscale Central Market chain. But it's flagship H-E-B supermarkets face somewhat of a competitive threat from Walmart and numerous other food and grocery retailers in Texas.

And of course there's Aldi, which has made Texas a major current and future focus, with plans to open a couple hundred stores in the state.

Therefore, it's a logical, competitive thing for H-E-B to create and test its own no frills, discount grocery store format named Joe V's Smart Shop (or another name), even though the "Joe" in its name is a creative fiction. We'll withhold judgement on the fictitious Joe V name for now.

H-E-B is using the Joe V's Smart Shop store as a prototype and, according to our information, isn't planning to open a second unit soon. Rather, it wants to study, analyze and tweak the first Joe V's for a while before opening another, or for that matter not opening any additional units, which seems "smart" in our analysis.

The Joe V's format and prototype store will be an interesting development, from one of the most interesting and successful grocers in the U.S., to observe and follow closely. We will be doing just that.
Posted by Fresh & Easy Buzz at 5:16 PM

Excellent article, never underestimate the man behind this blog - I am not talking about Joe V.

Not to rant - comforter for sale in Humid-ston? I don't know. Why use the same in-house brands (e.g., Hill Country Fare) as HEB? Create something else, please.

I will give the nod for the iCASH - neat idea (efficiency).

Awesome. I am from KC Missouri, but now live in Houston. We have been waiting for an "Aldi" or "Save a lot" to get here. Joe V sound great! Time to stock up before the "2010 winter food crisis hits".

I think it is important for you all to know that Joe does exists. Joe V is the Store Director for this store and if you stop by you can meet the man.

Anonymous said...
I think it is important for you all to know that Joe does exists. Joe V is the Store Director for this store and if you stop by you can meet the man.

Thanks for the information anonymous. Would you please publish store director Joe V's first and last name here in the comments section for our readers. That way they can know there's a real Joe V, who the store is named after, as you say. Thank you.

Are you refering to the Jose V who's email address is listed on the H-E-B site in terms of him being the real Joe of Joe V's Smart Shop?

I was very disappointed about the way customers had to wait in a long line with your frozen goods thawing out for a employee to direct you to a register. There has to be a better way to checkout.

Anonymous said...
I was very disappointed about the way customers had to wait in a long line with your frozen goods thawing out for a employee to direct you to a register. There has to be a better way to checkout.

Could this have happened because it was a very busy grand opening at Joe V's? It can happen to the best of them on such times.

I recently went to the Joe V store in Galena Park and I have to say I was amazed at how much cheaper most of the items were compared to Walmart...wish they would put one up closer to me as I would rather shop there than the walmart. I give the store 2 thumbs up.

I just went yesterday for the first time and I was suprised at how much of what was written is true. CHEAP! Is all I have to say, herray. I am from Humble Texas and I will drive to get those low prices even if i have to fill two baskets to make it worth my while.