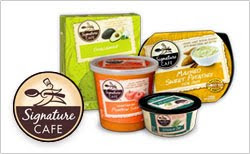 Fresh, Prepared Foods Merchandising
Safeway Stores, Inc.'s fresh, prepared foods category is currently doing about $100 million in annual sales in the food retailer's 1,730 supermarkets in the U.S. and Canada, CEO Steve Burd said today during a conference call with analysts.
The conference call today was part of Safeway's reporting of its fourth quarter 2009 earnings. Safeway reported a loss of $1.6 billion for the fourth quarter of 2009, largely on a charge taken for a decrease in the value of its Vons chain (something to watch closely) in Southern California and its Eastern Division chains. Sales for the quarter were down 8.1% over the previous year's quarter. Same-store sales also dropped. You can read the complete details here.
The fresh, prepared foods category at Safeway includes ready-to-eat and ready-to-heat items like entrees, side dishes, pizzas, sandwiches and related items all primarily under the grocer's Signature Cafe store brand, but doesn't include the deli category, which would make the annual sales figure much higher that the $100 million.
In response to this question (in italics) [One category I am interested in, around the trends you are seeing say to the fourth quarter and into the current period. What do prepared foods look like and what kind of price points are people drifting towards?] from analyst Chuck Cerankosky of Northcoast Research, Burd said (in italics):
"Our prepared foods business has actually really done well for us this year. If you go back I think it probably was two investment conferences ago, we actually served a number of our prepared meals to everybody at the investor conference. And at that time we were pretty excited about it and had it in only a sampling at stores.
We struggled to really make that a profitable business because we had relatively short shelf life and we had a lot of shrink. And at that time we probably had a lot of SKU’s. So that business has been completely reengineered giving us extended shelf life without sacrificing quality.
And in that business today we’ve gone from zero to more than $100 million in sales in a relatively short period of time. And so, in terms of overall price point, I’m not sure if those price points have materially changed. We have certain on tray items that are actually designed to feed as many as four people and others design to feed as little as one.
And so the price points can be quite varied. But I think that the vision that we had a couple of years ago has finally been realized and that business is growing nicely."
Although CEO Burd didn't have much to say regarding the price point part of the question, Safeway has been heavily promoting its ready-to-eat and ready-to-heat fresh, prepared foods since about October 2009, according to Fresh & Easy Buzz research and analysis.
For example, we've documented that since that time to this week, Safeway has promoted its Signature Cafe store brand packaged ready-to-heat entrees and side dishes in its weekly advertising circular nearly every week.
The entrees are ad-priced at $3.99 each; the side-dishes at $2.99 each.
Additionally, about once every other week since November 2009, Safeway adds an additional promotional offering on the entrees and sides: If customers buy any combination of three of the entrees and side dishes using their Safeway Club Card, they get an additional $1 off per item, bringing the sale price on the entrees to $2.99 each and $1.99 each on the side dishes.
Further, each week Safeway runs a hot buy of $5 on a fully-prepared family size center-of-the-plate meat item that feeds 3-4 people. Those items include boneless turkey breast, whole roasted chicken, fried chicken, St. Louis Style Smokehouse Ribs and a couple additional offerings. Each of the about five items are rotated in the ad weekly. For example, this week's offering is either a 24oz (for 3-4 people) Signature Cafe Roasted Turkey Breast or Turkey Pot Roast for $5
The grocery chain also frequently does the same thing with a family-sized non-meat entree, such as a pasta meal. In this week's advertising circular Safeway is offering a number of varieties of 32.5-38.5 ounce ready-to-heat Signature Cafe Pasta Meals at $8.99 each. The pasta meals are very similar to those sold at Tesco's Fresh & Easy stores.
As part of its heavy promotion of fresh, prepared foods, Safeway also has been offering weekly one or two ready-to-eat hot or cold sandwiches at price points of $3.99 and $4.99, depending on the variety and size of the sandwich. This week it has a new item for $3.99 - a BBQ Tri-Tip sandwich on a french roll.
The grocer also offers additional prepared food items like its Signature Cafe Take-and-Bake Pizzas and other ready-to-eat and ready-to-heat items regularly in the ads.
At least one Signature Cafe ready-to-eat salad item is run bi-weekly and often weekly in the advertising circular. And in the fall and winter Safeway has been running its Signature Cafe prepared soups on ad about twice a month.

Lastly, Safeway has been frequently offering various prepared foods full meal-deals like the chicken, side dish and rolls promotion for $9.99 pictured at left. Safeway partners with a vendor, in this case King's Hawaiian Bread, for these promotions. The vendors offer promotional monies which Safeway then puts into the promotional discounts on its prepared foods items.
On average, Safeway runs about 8-10 prepared foods items in the ad circular each week.
So as you can see, in terms of price points, Safeway is focusing on some strong fresh, prepared foods category promotion as a way to keep retail prices at the lower-end on a variety of items on a regular basis. The best evidence of this is its near-weekly promotion and advertising of the Signature Cafe packaged entrees and side dishes.
From a merchandising and marketing perspective this makes sense because in the recession shoppers aren't willing to pay much of a premium for prepared foods. However, priced right, considerably below restaurant take-out for example, prepared foods sales at supermarkets can be brisk.
Safeway continues to develop new packaged and bulk ready-to-eat and ready-to-heat fresh, prepared foods items and add the new SKUs in its stores.
Unlike Tesco's fresh & easy, Safeway merchandises fresh, prepared foods in both packaged and bulk/deli style forms.
As we first wrote about in early 2008 here and here, Safeway Stores, Inc. owns a restaurant in Redwood City, California named Citrine, which the grocery chain uses as its fresh, prepared foods research and development lab.
Safeway doesn't own Citrine, which it opened in 2007, because it wants to be a player in the restaurant business. The restaurant's chefs develop recipes, get feedback from restaurant patrons, and then Safeway turns the recipes into prepared foods items to be sold in its supermarkets.
We recently were told by a source at Safeway in a position to know that the retailer is currently working on a number of new fresh, prepared foods items to go under its Signature Cafe brand. The primary focus of the new prepared foods items in development is value - larger family-sizes of high-quality but at affordable price points - the source tells Fresh & Easy Buzz.
Safeway Stores, Inc. is the fifth-largest food and grocery retailer in the United States. Walmart Stores, Inc. is number one, Costco Wholesale is ranked second, followed by Kroger Co. and Supervalu, Inc.
Posted by Fresh & Easy Buzz at 9:40 PM