Walgreens Eyeing San Francisco For Fresh Foods Program: Could it Strike Category Gold in the City By the Bay? 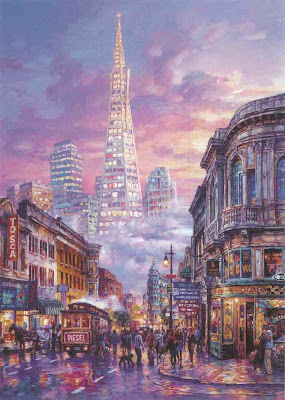 Drug chain Walgreens is looking closely at San Francisco, California as one of the first major U.S. cities in which to launch its fresh foods (ready-to-eat foods and probably some ready-to-heat as well) program, Fresh & Easy Buzz has learned.

As we first reported in this January 6, 2010 story, former Fresh & Easy Neighborhood Market director of Fresh Foods Jim Jensen left the Tesco-owned chain on December 30, 2009 to take a job with Walgreens at its corporate headquarters in Illinois. Fresh & Easy is based in the Southern California city of El Segundo

Jensen's new position at Walgreens is as the drug chain's new corporate divisional manager of fresh foods. See our stories here for details. Both the division and the position are new at Walgreens.

Jim Jensen is joining Brian Pugh, the former vice president for retail operations at Tesco's Fresh & Easy, at Walgreens. Pugh is the vice president of merchandising at the drug chain, a position which includes responsibility for the consumables categories, including the new fresh foods focus.

San Francisco would be a good and logical choice as one of the first major U.S. cities for Walgreens to launch it's fresh, prepared foods program for a number of reasons:

>Prime demographics: San Francisco's population skews young. It also has a high percentage of single people. These two demographics are excellent for the retail merchandising of ready-to-eat and ready-to-heat fresh, prepared foods of all types. In other words, San Francisco is a grab-and-go and more fresh foods merchandising heaven.

Additionally, San Francisco has among the highest income of all U.S. cities. It's in the top five.

But even more important, San Franciscans spend a higher percentage of their income on prepared foods of various types than do residents of nearly any other U.S. city. New York City and Boston being the two closest.

San Francisco has a much higher proportion of people living in apartments than it does single family houses. This phenomenon also lends itself to higher purchases of ready-to-eat and ready-to-heat fresh foods.

Add to this the fact that San Francisco is a walking and public transit city, which means frequent grab-and-go eating, and you can begin to see the reasons why making the city one of its first markets in which to launch its fresh, prepared foods program would make good and logical sense for Walgreens.

San Francisco's high daytime population - they all have to eat lunch - also offers an added incentive for a chain like Walgreens to add fresh, prepared foods to some or all of its 64 stores in the city. These suburban commuters work downtown in the city's financial district, but also at the many media companies in the South of Market neighborhood, as well as in numerous neighborhoods throughout the city. Their are Walgreens stores in nearly all of these neighborhoods. 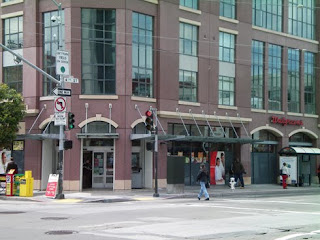 Pictured above is a Walgreens store in San Francisco's South of Market neighborhood. The store is the retail anchor of a mixed-use office and residential building, which offers a ready-made customer base for grab-and-go prepared foods.

Walgreens already sells a limited variety of fresh foods, such as milk, eggs, juices and other beverages, along with some perishable and frozen foods in its stores nationwide. However, by fresh, prepared foods we're taking about ready-to-eat items like sandwiches, snacks and desserts, and ready-to-heat items like pizza's, hot sandwiches and perhaps even entrees and side-dishes in a limited assortment.

San Francisco, which was where the successful gold miners spent their treasures during the great California Gold Rush in the 1800's, is one of the strongest markets in the U.S. for sales of ready-to-eat and ready-to-heat fresh, prepared foods. This includes sales at supermarkets, specialty food stores, corner grocery markets, convenience stores and at a vast variety of prepared foods venues like restaurants, kiosks and other outlets.

With its existing base of 64 stores in the city, if Walgreens were to introduce fresh, prepared foods in some or all of those stores, it would become a major retailer of ready-to-eat and ready-to-heat foods in San Francisco by virtue of the fact it covers those 47 square miles with a retail store unit blanket. Existing retail real estate is a powerful strategic tool to have.

For example, Supermarket chain Safeway Stores, Inc., which is headquartered just 30 miles from San Francisco in Pleasanton, has about 15 stores in the city. Of course Safeway's supermarkets, even its smallest units in San Francisco, are at least three times the size of the San Francisco Walgreens' drug stores. They also offer much more in the way of food and grocery selection.

But that's not what's most significant in this case, since little square footage is needed to merchandise a selection of fresh, prepared foods. What's key for Walgreens is that it has those 64 stores, which are located throughout the city, including in the downtown, as well as in San Francisco's many neighborhoods. This is the power of existing retail real estate we mentioned earlier.

Walgreens and Safeway have the most stores in San Francisco of any retail chain of any format we are able to find.

It's clear San Francisco offers considerable opportunity for Walgreens in the fresh foods space as it further develops and starts to launch its program.

Walgreen's isn't at present confirming or denying that it's looking closely at San Francisco as one of the first markets in which to rollout its fresh, prepared foods program, which we think will be mostly ready-to-eat-focused, but will also have some ready-to-heat items as a part of it.

Walgreens recently applied to the city of San Francisco for permits to sell alcohol at 34 of its 64 stores in the city. This is part of a national corporate move, to offer alcohol sales in more of its stores in the U.S., which is part of the drug chain's increased focus on offering more consumables for sale in its stores, which we first wrote about here in January 2009. The new fresh foods program is also part of that new consumables strategic emphasis.

Tesco's Fresh & Easy currently has two confirmed store locations in San Francisco - at 3rd Street & Carrol Avenue and at Silver Avenue & Goettingen Street. However, those locations have been confirmed by Fresh & Easy since January 30, 2008.

But it appears, based on our information, research and analysis, that Walgreens is thinking that if you are in San Francisco, you should have fresh foods in your stores.

[Graphic credit: The limited edition print of San Francisco's North Beach neighborhood with the Transamerica Pyramid building in the background is by Cao Yong Editions, courtesy of NCH Galleries.]