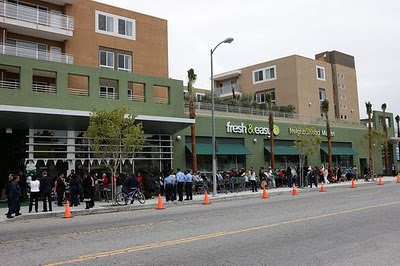 ALDI does not accept WIC - but yes to EBT.

It's only taken Tesco 3 years to figure out taking WIC is a good idea. That's what I call slow on the uptake. I bought the infant formula category for many years at a California chain. 30-40% of our sales were from WIC. Most of the stores weren't in real low income areas either. The average retail on a 4 pk of forumula is about $25 bucks. As I recall the WIC coupons often are for a 4 or 6pk of Enfamil, ect. each. As a buyer at the time my numbers on that particular category would have been very poor were it not for the WIC sales.

Hi, can anyone workout the average weekly sales per store for fresh and easy.

With the annual sales figures just out it should be a case of dividing the sales by number of stores open is that right.

I know early on there were rumours stores were doing around $70000 a week which was much lower than the $200000 tesco had targeted. Ive never seen any update to these figures in a few years now and wondered if they have improved much.

We will be publishing an analysis piece sometime next week which will include most of the data - along with additional analysis - you mention.

I like how you guys put it out there that only the POOREST of poor mothers have WIC. Just because its government help doesn't mean everyone that receives WIC is super poor. Go do some research before you say something like that.

Anonymous said...
I like how you guys put it out there that only the POOREST of poor mothers have WIC. Just because its government help doesn't mean everyone that receives WIC is super poor. Go do some research before you say something like that.

In order to receive WIC a person has to basically have non-existant or extremely low wages. In other words the poorest of the poor. Not all every mother who receives WIC are the poorest, of course. But the term is based in research and reality. It's an economic term; it's not meant to pass any sort of status judgement. If you research California WIC qualifications you will find if a mother has even a barely-making it income it makes it hard to qualify.