(Grocery) Storeless in Seattle: Food Deserts in Urban and Inner-City Seattle, Washington; Might be a 911 Call to Tesco's Fresh & Easy? 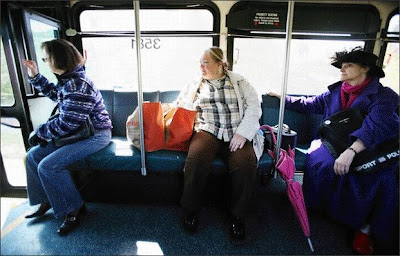 On April 27, we wrote this piece about a new study conducted by the University of Western Ontario in the city of London, Ontario, Canada in which the researchers found what are referred to as "food deserts," urban neighborhoods where residents are underserved by grocery stores that offer a decent selection of basic grocery products and fresh foods at reasonable prices.

We discussed the fact that although one can't generalize such a study to every city in North America, the study's methodology can be used anywhere to analyze the "food desert" phenomenon.

We also discussed the fact their are documented urban (and some rural) food deserts in numerous U.S. city's such as Detroit, New York City, Phiadelphia, Los Angeles, Cleveland, Oakland, San Francisco and many others.

Today's Seattle Post-Intellegencer newspaper has an article about that city's urban "food deserts."

In the piece, "A long haul just to get their daily bread," reporter Jennifer Langston writes about how many parts of Seattle lack a grocery store within walking distance or a 30-minute bus ride.

She reports on research conducted by the University of Washington in which the researchers documented this over 30-minute bus ride to a grocery store phenomenon. The study even found that even in some wealthy Seattle neighborhoods it was difficult to find a grocery store within a decent walking distance.

The story also discusses some of the urban initiatives we've mentioned on Fresh & Easy Buzz before, such as New York City's Green Cart initiative in which the city recently passed legislation to allow 1,000 sidewalk fresh produce carts as a way to give inner-city residents better access to fresh fruits and vegetables.

Additionally, it mentions the state of Pennsylvania's $30 million dollar seed capital investment which is designed to lure grocery stores that offer basic grocery products and fresh and healthy foods at reasonable prices to these "food desert" neighborhoods.

Many of these urban initiatives are going under the collective name of the "healthy corner store" movement, as we mentioned here before.

As we written about before, one of Tesco's strategies with its Fresh & Easy Neighborhood Market USA small-format, combination basic grocery and fresh foods stores is to locate stores in these underserved urban neighborhoods.

Read the article, "A long haul just to get their daily bread," in today's Seattle Post-Intelligencer here.

The residents of urban Seattle may have one alternative to long walks and bus rides in terms of being able to do their grocery shopping in the distant future.

We've known for some time that opening Fresh & Easy grocery stores in Oregon and Washington State are a part of Tesco's longer-term strategic plan for its Fresh & Easy USA venture.

The plan essentially rolls out this way--or at least it did as late as last November: Start in Southern California, the Phoenix, Arizona Metropolitan region and the Las Vegas, Nevada metro area with the Fresh & Easy stores; then move to Central (Bakersfield region/Central Valley) and Northern California (San Francisco Bay Area and Sacramento region), then once in Northern California, shoot up into Oregon and Washington state.

We believe that plan is still on the books, but that the timeline has likely been pushed back. Originally, according to our sources, the first Oregon and Washington state stores would likely open as early as late 2009, not too long after the Northern California stores would have opened.

We now believe that timeline has been pushed back, and that going into the Pacific Northwest is far less of a current focus for Tesco as it wants to get more stores grocery markets in California, Arizona and Nevada, and increase business substantially in those grocery stores already open and operating.

But, the Pacific Northwest expansion is still a part of Tescos' Fresh & Easy USA strategy.

As we've argued before in Fresh & Easy Buzz, we believe Tesco's strategy of locating some of its small-format grocery stores in urban, inner city areas that are underserved by grocery stores which offer a decent selection of basic groceries and fresh foods at reasonable prices, is largely a good one. In fact, we've suggested the grocer build more than the handful of stores it's built thus far in these urban "food desert" neighborhoods, which abound.

There are few if any other supermarket retailers locating stores in these underserved neighborhoods in the United States. As the Seattle Post-Intelligencer article shows, even cities considered to be fairly upscale like Seattle have urban food deserts.

Los Angeles, Phoenix, San Francisco, Oakland, Fresno, Sacramento, these and many other cities in the regions' where Tesco currently operates with its Fresh & Easy grocery chain have neighborhoods that are underserved by grocery stores offering basic groceries and fresh foods at decent prices.

Right now, Tesco is about the only grocery chain in the Western U.S. answering the 911 urban "food desert" phone call as part of its retail strategy. That could very well turn out to be a important business response on Tesco's part.
Posted by Fresh & Easy Buzz at 10:07 PM