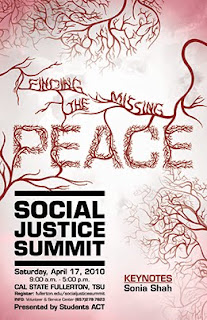 With the exception of picketing at selected stores, primarily in the Fresno region in California's Central Valley and in Southern California, along with some fairly stealth behind the scenes organizing of workers, the United Food & Commercial Workers (UFCW) union has been rather quite over the last year in its now three year campaign to organize store-level employees of Tesco's Fresh & Easy Neighborhood Market.

But today, nestled among the various seminars and workshops on social action, grassroots organizing, community development, human rights and environmental issues at California State University Fullerton's 6th Annual Social Justice Summit in Southern California, one particular workshop stood out among all the others to Fresh & Easy Buzz: "Organizing for Respect, Dignity and Justice at Fresh and Easy Neighborhood Market," presented by Berny Enriquez of the United Food and Commercial Workers union.

The workshop - also billed as "Building Worker Power at Fresh and Easy," is being held from 11:30 am -to- 12:30 pm today in the Titan Student Union Building at the free, all day summit, sponsored by Cal State Fullerton's Volunteer and Community Service Center, which is located on the campus in Orange County.

The university center bills the annual event, which is attended by thousands of academics, political and religious leaders, members of organized labor, and regular citizens, as "providing a forum for people to exchange ideas about improving the state of our communities, offers space to dialogue about the obstacles to creating effective change, provides effective tools for social action, and offers tangible grassroots solutions."

The inclusion of the UFCW-Fresh & Easy workshop at today's event is interesting for a couple of key reasons.

First, it's the only workshop on the agenda at the Social Justice Summit that focuses specifically on an individual company - Tesco's Fresh & Easy Neighborhood Market.

Second, it's also the only workshop on today's agenda with a specific focus on organized labor and the organizing of non-union companies.

Both of these items are important in that (1) the UFCW chose Tesco's Fresh & Easy as the one out of the numerous (Walmart, Target, Whole Foods, Trader Joe's, for example) non-union food and grocery retailers it's attempting to organize to focus on at today's event; and (2) the organizers of the annual Cal State Fullerton Social Justice Summit invited the UFCW to present the Fresh & Easy organizing workshop at the event.

It's our analysis one of the reasons the UFCW has been less overt, particularly in Southern California where Tesco's Fresh & Easy is headquartered and where it has the majority of its stores, over the last year is because the retail grocery clerks' union has been putting more of a focus on building a grass roots, community-based coalition to help it achieve its goal of unionizing the grocery chain's store-level workers.

The participation in today's Cal State Fullerton Social Justice Summit is an example of these efforts. There have been other similar grass roots-type efforts of late for the UFCW.

Another reason, in our analysis, the UFCW has been less active in its Fresh & Easy employee organization efforts is because of the recession (high unemployment), coupled with the fact Tesco has been losing tons of money with its small-format, combination fresh foods and grocery chain. We estimate Tesco has lost at least $700 million on Fresh & Easy since 2006. The first stores opened in November of 2007.

Because of the high unemployment rates in California, Nevada and Arizona, where Tesco has its 152 Fresh & Easy stores, the UFCW took some flack for its very aggressive campaign in 2008 to early 2009. Since then the union has taken a much more low key approach in its efforts to organize the grocer's store-level workers, particularly on the public relations front.

However, the UFCW hasn't given up its efforts by any means, although many observers wonder why it went from such an aggressive campaign to such a low key one.

Interestingly, the UFCW hasn't publicly gone after Tesco regarding the NRLB ruling. For example, the union hasn't issued a press release about the issue, nor has it used the ruling in its campaign to unionize Fresh & Easy in any demonstrable way.

Tesco Fresh & Easy's public position is that its store-level employees have the right to organize a union if they so desire, based on U.S. labor laws. However, the NRLB violation involves a lawsuit by a former Fresh & Easy employee who charged the grocer interfered with her right to do just that, which the judge in the case agreed was the case.

Thus far, there hasn't been a Fresh & Easy store where employees have called for an open ballot election for membership in the UFCW, which is the key step to being recognized as a union shop.

We predict once there's a marked improvement in the economies, particularly lower unemployment, of these three states - California, Nevada and Arizona - we will see a marked increase in the level and intensity of activity on the part of the UFCW in its Fresh & Easy organizing campaign.

Also look for increased efforts on the part of the union to build a strong, community-based coalition in Southern California, likely comprised of many of the organizations and individuals in attendance at today's Cal State Fullerton Social Justice Summit, as a way to improve its odds in organizing Fresh & Easy employees.