Las Vegas Market Report: A 'Food Desert' Neighborhood to Get A New Grocery Store; But it's Not A Fresh & Easy Neighborhood Market 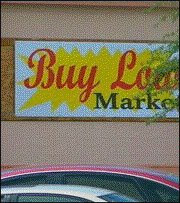 Regular Fresh & Easy Buzz Las Vegas, Nevada correspondent Michael Vegas tips us to a report on local television Channel 8 about a low-income neighborhood in the city located west of downtown which has been trying to lure a grocery store to it for years.

The majority African American-populated neighborhood doesn't have a grocery store in it that offers a decent selection of basic groceries and fresh foods like produce and meats at affordable prices. In other words, it qualifies as an urban, inner city "food desert," or a neighborhood underserved by grocery stores.
The neighborhood has been completely without a grocery store since a Safeway Stores, Inc.-owned Vons supermarket closed in 2004.
Now, Channel 8 reports the Las Vegas City Council has lured a new grocery store to the neighborhood. But, it isn't a Tesco Fresh & Easy Neighborhood Market store--despite the retailer's statements that one of its key strategies with the small-format, combination basic grocery and fresh foods chain is to locate stores in regions it does business in "food desert" neighborhoods.
Rather, a California-based grocer named "Buy Low Market" will be opening a store in the low-income Las Vegas neighborhood west of downtown, according to the Channel 8 report. 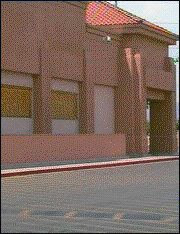 Safeway Stores, Inc. owns the building (pictured at left) and will be subleasing it to the company that operates Buy Low Market.

Fresh & Easy Buzz is familiar with K.V. Mart's supermarkets and warehouse stores, including those under the Buy Low Market banner. The supermarkets aren't fancy or upscale. However, they offer a solid selection of national brand and private label food and grocery items at good prices. The stores also have strong selections of bulk fresh produce and fresh meats offered at value prices.

The retailer is an ethnic niche marketer as well, so look for it to offer an expanded selection of foods appealing to the minority consumers in the Las Vegas neighborhood as well, if the grocers' current merchandising practices in Southern California are any indication of how it will merchandise the west of downtown store in Las Vegas.
K.V. Mart is a major customer of Unified Grocers, the largest wholesale grocery distributor in the Western U.S. All of its banner stores sell Unified's private label grocery products. Unified also has one of the largest ethnic foods product selections of all grocery wholesalers nationally, which K.V. Mart takes advantage of liberally in its stores.
We expect K. V. Mart, which is a cautious but aggressive multi-store independent operator, to look at opening addition stores in the Las Vegas region--not just under its Buy Low Market banner but also under one of its warehouse store banners--now that's it's entering the market with its first store.
Meanwhile, although there seems to be some anger on the part of some of the neighborhood's residents over the Las Vegas City Council's decision to lure the grocer to the neighborhood, the good news is neighborhood residents will be getting a supermarket operated by an experienced food retailer, which offers a wide-selection of groceries and fresh foods with a emphasis on everyday low-prices and value.
Posted by Fresh & Easy Buzz at 2:05 PM

KV Mart is an agressive grocer in Southern California. They regularly kick Ralph's and Vons butts on prices, including produce. The stores are fairly bare bones but the pricing is low and quality pretty high. Are also strong in the Hispanic category, both with selection and pricing.

I've shopped at Top Valu for years. Great produce, nice meat selection and good prices. I think they will be good for the area.