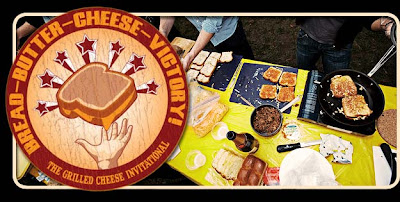 The grilled cheese-focused competition and festival was held from 12 pm -to- 6 pm at Los Angeles Center Studios, (1201 West Fifth Street) in downtown Los Angeles.
For $15 at the door - and a mere $10 in advance - grilled cheese "sammich" (the organizer's shorthand for sandwich) lovers and fun-seekers got to have a full day of cheesy fun. The event also included a food festival (and a beer garden) featuring a wide variety of goodies to eat and drink. Numerous other events also took place.
The grilled cheese invitational, which was created by Los Angeleno Tim Walker in 2003 and held in a residential loft downtown as a competition between the grilled cheesemeister-in-chief and some of his friends, has grown into a national movement dedicated to perfecting the art of the grilled cheese sandwich.
The Los Angeles competition has spawned numerous regional grilled cheese sandwich competitions across the U.S., such as one in Austin, Texas, which nearly rivals the Los Angeles flagship event in size. The Los Angeles invitational remains the "big cheese" though.
The humble (but increasing more upscale and therefore not 100% humble) grilled cheese sandwich has never been more popular than it currently is in the U.S. Not only are people making the sandwiches at home like never before - and using a variety of different cheeses rather than the standard American slice - but more and more restaurants of all types have and are putting grilled cheese sandwiches on their menus.
Additionally, restaurants focusing on grilled cheese sandwiches have opened in Southern California, New York and in a few other U.S. cities over the last couple years. [A few examples.] There's even a grilled cheese sandwich-focused food truck or two among the hundreds (some say thousands) of food trucks roaming the streets of Los Angeles every day.
Basically, the continued and increasing popularity of the grilled cheese sandwich in America is all about comfort (memories of childhood food), affordability and - taste.
For example, we enjoy a grilled-to-perfection (need to use butter) provolone or mozzarella grilled cheese, with a slice of tomato and a couple leaves of fresh basil (some sauteed mushrooms on occasion), on sliced sourdough bread.
For those comfort food times, we also like the traditional version (with real American cheese not "cheese food though), along with at least a half dozen other versions.
This points up another reason the grilled cheese sandwich is so popular - its like a blank canvas on which a sandwich-maker can create dozens of different versions, using various cheese varieties and other ingredients, limited only by his or her imagination, and some common culinary sense.

Tesco's Fresh & Easy Neighborhood Market signed on as one of the sponsors of yesterday's Los grilled cheese competition, which the organizers call "the best thing to happen to sliced cheese since sliced bread," this year.

In fact, speaking of sliced bread, Fresh & Easy's official title as a sponsor for the competition was "Official Bread Sponsor."

The "Exclusive Cheese Sponsor," (yes, the head cheese) of the event was Oregon-based Tillamook Cheese company." Tillamook also was the lead sponsor of the grilled cheese competition.

And what self-respecting grilled cheese sandwich competition wouldn't include an "Official Tomato Soup" sponsor? Not this one. That honor went to another Oregon-based company - Pacific Natural Foods. [Full sponsor list.]

Additionally, at the event yesterday, members of the Fresh & Easy team were passing out $5-off store coupons. We were told by an event organizer that every person attending the 1st 8th Annual Grilled Cheese Invitational was to get one of the Fresh & Easy coupons.

One of the highlights of yesterdays grilled cheese festival and competition was the "Cheesy Costume Contest," which was added for the first time this year. The contestants for that competition turned out in a variety of very creative costumes. Trust that Wisconsin's famous "Cheese Heads" had nothing on this group.

Even more interesting, there was a "Cheese Calling Contest," which was similar to a hog calling contest but without the oinking or the odor. Although some squealing was reported to have been heard during the contest.

We suggest signing on as a sponsor of the grilled cheese competition and festival was a good marketing move to do for Fresh & Easy Neighborhood Market.

First, the demographic of those attending the grilled cheese festival yesterday skewed to younger and more urban. This is the demographic we've found to most like the Fresh & Easy format, and to shop most frequently at the stores.

For example, the grocer should consider a major promotion featuring all of the various items that can be used to make grilled cheese sandwiches - numerous varieties of cheese and bread, butter, tomatoes, fresh herbs and on and on. Along with the main ingredients Fresh & Easy can feature some of the endless varieties of products that go well with a grilled cheese sandwich - soups (especially tomato), snack chips, pickles, beverages and the like.

If Fresh & Easy Buzz were advising Tesco's Fresh & Easy, we would suggest the grocer partner with the other food and beverage sponsors of yesterday's grilled cheese invitational - Tillamook Cheese, Boulder Natural Foods (potato chips), Pacific Foods (soups) and Izee (sparkling juices) - along with adding some additional (besides bread) Fresh & Easy store brand items that relate to the grilled cheese sandwich theme - and build displays featuring the items in all of the stores.

We'd include on the displays colorful point-of-purchase signage touting the event and the winners, which will be announced tomorrow.

We would also tout the promotion in the weekly Fresh & Easy Neighborhood Market advertising flyer with a headline reading something like this: "The winners of the Los Angeles grilled cheese sandwich competition use Fresh & Easy brand bread." All of the grilled cheese sandwich themed promoted items would then go below the headline in the ad flyer. (We actually would have done the displays and promotion leading up to the event, putting the promotional focus on the then upcoming grilled cheese competition. But its not too late. The grocer could just put the focus on the winner aspect, as mentioned.)

Third and last, we suspect starting tomorrow (yes, were early), Saturday's grilled cheese invitation will get lots of press attention in the Southern California media. That's because tomorrow, April 26, is when the event's organizers will announce the winners of the grilled cheese competition in its various categories.

That could (and should) create some buzz in the market for Fresh & Easy, assuming it makes sure to be mentioned as a sponsor of the event by contacting members of the print and broadcast consumer press in Southern California starting early tomorrow morning.

Fresh & Easy Buzz hasn't seen a press release to date from Tesco's Fresh & Easy Neighborhood Market about its sponsorship of the grilled cheese sandwich competition. That's a mistake on the part of the grocer's marketing and public relations staff, since there's real local news and human interest value in the grocery chain's sponsorship of the event, by virtue of the fact there's lots of interest in the event in general.

Finally, sponsoring the event shows good community relations and involvement by Fresh & Easy, which is a solid positive, even if it can't be quantified in terms of sales volume.

Since the announcement doesn't come until tomorrow (April 26, 2010), we can't end this piece with a list of the winners of the big grilled cheese competition.

But tomorrow you can go to the grilled cheese invitational website for a list of all the winners of yesterday's downtown Los Angeles grilled cheese sandwich competition.

great ideas. but f&e will not be open to them (cuz it wasnt their idea).

the fact that the store got involved at all was 100% due to the store managers efforts.

I'm jealous! Where is the invitation? Let me know for next year! I eat that sandwich, almost everyday for lunch.

No one thought of beefsteak rye instead of white bread, hmm?

Which store (location) is the store manager responsible for getting Fresh & Easy to sponsor the event from?

Damien said...
I'm jealous! Where is the invitation? Let me know for next year! I eat that sandwich, almost everyday for lunch.

No one thought of beefsteak rye instead of white bread, hmm?

We don't have anything to do with putting on the grilled cheese competition. But if you click on the link in our post to their website, you can find out there in the not to distant future when the 2011 event will be held.

And you are right - rye bread goes great with a grilled cheese sandwich. The combinations are endless.

The other reader is right that it's a store manager responsible for the sponsorship. I think it was the manager of the Eagle Rock store in LA. Not 100% sure but maybe someone else can confirm it. They're also right it's why corporate didn't promote the sponsorship.