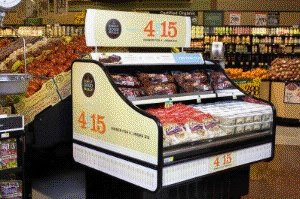 Supervalu, Inc., which operates the Albertsons banner supermarkets in Southern California and southern Nevada, along with a total of about 2,500 supermarkets under numerous banners nationwide in the U.S., today announced the introduction of a new meal solution destination in-store program it calls "Simply Good Meals." Supervalu, Inc. had 2008 sales of $45 billion.

The focus is on offering affordable, convenient meal solutions to capture shoppers who are looking for what to prepare for dinner that night while shopping in the store.

For example, Most stores will initially feature up to four "Simply Good Meals" in-store destinations, including two in the produce area, one in the meat section and one in the deli department. Some stores will also have additional meal and soup destinations in the deli area, according to a Jim Smits, Supervalu's group vice president for fresh foods.

One of the destinations -- known as "4:15" (as in the time of day) -- will feature a selection of items targeted to busy moms and designed to create a good, easy, home-cooked meal for a family of four for under $15 and, in many cases, in 15 minutes or less, according to Smits.

"Research shows that most people don't know at 4 o'clock what they are having for dinner that night, and in many cases, these hurry-up meals result in less-than-balanced and more expensive food choices," Smits says.

"We wanted to make it easier for our customers to answer that inevitable 'what's for dinner' question by providing them with simple, convenient, affordable ideas for creating a real home-cooked meal."

Smitts adds in explaining the merchandising philosophy behind the new meal solution-centered program: "The 'Simply Good Meals' program addresses consumers' needs for convenience, value and family meal-time help at a time when concerns about the economy are causing changes in their eating and shopping behaviors.

According to the Food Marketing Institute, 71 percent of consumers are cooking at home more and eating out less at restaurants. Yet on a typical weekday, nearly 53 percent of consumers don't decide what's for dinner until a couple of hours or less before the meal. While time constraints continue to drive demand for quick and easy meal solutions, moms frequently find that meals at cheaper price points are incomplete or less satisfying.

In addition, most moms equate cooking with emotional meaning, with eight in 10 saying they show their love for their families by making home-cooked meals as often as possible, and 74 percent saying they put a lot of care and emotion into their cookin, according to Yankelovich. At the same time, nearly 45 percent of women say they tend to prepare the same meals all the time, and others simply lack the time and skills to cook."

Items in the "4:15 meal solutions" destination area will include offerings like those listed below, according to Supervalu:

>Ready-to-heat beef roast, potatoes and a salad.
>Lasagna, salad and French baguette.
>Pork teriyaki tenderloins, a side dish and salad.

Initially the meal solutions will change every other week, ensuring a variety of different menus for busy, on-the-go moms, according to Supervalu's Smits.

Supervalu said today it will initially roll the meal solutions program out in 1,300 of its 2,500 U.S. supermarkets to start, beginning right away.

There's nothing particularly unique about the more value-based meal solution-centered offering from Supervalu in terms of the products offered and the concept of meal solutions, which is something Supervalu and most other supermarket chains have been doing for a number of years, although the merchandising practice has become more pronounced since last year when the recession hit hard.

The merchandising aspect of the program, the placement of the branded meal solution centers in different store departments, does offer some originality though. By placing the branded meal centers in the produce and meat departments, as well as in the deli/prepared foods sections, Supervalu has the potential of addressing customers at multiple points-of-purchase and decision-making in-store.

Such a multi-departmental merchandising strategy is a good one we believe because it attempts to catch the shopper with a meal solution idea in departments other than deli/prepared foods, thereby increasing the point of opportunity in which the customer is offered the selling proposition.

The meal centers also are a form of cross-merchandising, which enhances the opportunity for incremental sales since the concept is that shoppers will buy the multiple components (items) of the "meal" rather than merely an item or two. Such meal-centered cross-merchandising works in food retailing, as long as the cross-merchandised items are good and the pricing is appropriate.

This isn't Supervalu, Inc.'s first offering in the value-based meals and related prepared foods segment. The new meal solutions program follows the introduction by the grocery company last year of its "Culinary Circle" brand, a value-priced fresh, prepared foods line in all of its stores, including the Albertsons banner.

The "Culinary Circle" brand items are all prepared foods however. The items in the "Simply Good Meals" program include heat-and-eat and quick fix items that need some minimal preparation and value-adding (salad dressing on a salad type of stuff) at home. The average time to prepare the meals in the "Simply Good Meals" program is about 15 -to- 20 minutes, according to Supervalu.
In terms of the price point -- the under $15 -- it's our analysis based on research that the hot button meal solution price-point at present is about $12 and under for a complete meal for four. For example, Safeway Stores and Raley's, two supermarket chains with numerous stores in California and other western states, have since the middle of 2008 been offering meal solutions deals priced at under $12 and $10 and under for four. These offerings have been very popular at the two supermarket chains.

A number of the Supervalu "Simply Good Meals" program offerings come in at about $10 -to- $12 for four. We think those will be the most popular offerings in the program in the current recessionary climate.

The Albertsons stores in Arizona however are owned and operated by the private equity firm Cerebus, as are the Albertsons banner stores in New Mexico, Colorado, Texas, Louisiana and Arkansas.

Cerebus licenses the Albertsons brand name from Supervalu for these stores. The reason for this split is because Cerebus acquired those divisions from Albertsons, Inc. as part of the 2006 $9.7 billion acquisition of the company by Supervalu, in which Cerebus, drug chain CVS and Kimco Realty Company were investors.

Cerebus acquired all of the Albertsons, Inc. divisions mentioned above, along with a couple others like Northern California, which Cerebus sold last year to Modesto, California-based Save Mart supermarkets. Save Mart now operates those stores in the San Francisco Bay Area and Sacramento region under the Lucky banner. The Lucky stores are the number two market share leader in the Bay Area ,after number one Safeway.

Supervalu, Inc. also owns the 16 Bristol Farms supermarkets in Southern California and one store in San Francisco in Northern California. It acquired the small chain in the deal for Albertsons, Inc. in 2006. Albertsons bought then independent Bristol farms a few years before that.

Bristol Farms is an upscale, specialty-oriented format. It's a pioneer in fresh, prepared foods development and merchandising, albeit with most of its offerings at higher price-points. However, Supervalu has learned much about the fresh, prepared foods category, for example, since acquiring Bristol Farms nearly three years ago. Some of that knowledge has resulted in changes and product improvements overall in the category for Supervalu, including at its Albertsons stores in California and Nevada.

Supervalu, Inc. also owns the small-format, no frills, deep discount Sav-A-Lot chain. The Sav-A-Lot stores, many of which are franchised to independent operators, aren't included in the new meal solution program. [Supervalu, Inc. is growing Sav-A-Lot significantly. Read our December, 2008 piece where we detailed some of that growth here: Competitor News: Supervalu Inc.'s Small-Format, No Frills, Extreme Value Sav-A-Lot Chain Beefing Up its Executive Ranks as Part of its Growth Program.]
Posted by Fresh & Easy Buzz at 4:55 PM