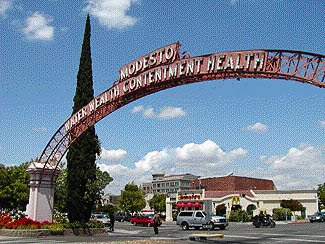 Despite having postponed its launch into Northern California indefinitely, Tesco's Fresh & Easy Neighborhood Market is planning a third store in the Northern San Joaquin Valley city of Modesto.

That store, a built-from-the-ground-up unit, is located in rural south Modesto, on Crows Landing Road near Whitmore Avenue.

There's currently a "Fresh & Easy Coming Soon" sign up at the store construction site, which is situated near a shopping center on Crows Landing Road that contains a Burger King fast food restaurant.

Crows Landing Road is a long, mixed-use commercial retail and industrial strip that ties the southern portion of Modesto into its downtown. The location of the Fresh & Easy market is at the far southern end of the commercial strip, in an area that's on the urban-rural edge of south Modesto. There are numerous orchards and other agricultural fields near the store site.

South Modesto is an interesting mix of commercial businesses, industrial firms and mostly single-family residential housing. The area has a very high Latino population. Many of the retail stores along Crows Landing Road cater to Hispanic shoppers, for example.

In terms of retail, along with a number of Latino grocers and bakeries, there's Hispanic-focused general merchandise stores, a number of used car lots, fast foods restaurants, service stations, a large retail-wholesale produce market and a Starbucks cafe with a drive-through window, which is located near the future Fresh & Easy grocery store location.

The neighborhood also has numerous industrial and wholesale distribution businesses. For example, the Winco Foods supermarket chain has a 700,000 square foot distribution center not far from the Fresh & Easy store site. There's also a number of small manufacturing businesses in the area.

It's a very mixed use commercial, residential, industrial and agricultural part of the city. In urban planning terms it can be characterized as an urban fringe area.

Along with the city's Airport District, South Modesto has the highest percentage of low income residents in Modesto, according to the city's Economic Development Department. Most of the housing in the neighborhood is older and is among the most affordable in the city of 205,000. Stanislaus County has a population of about 520,000. Modesto is the county's largest city.

South Modesto also has, along with the Airport District neighborhood, the highest percentage of city residents receiving federal, state and county government financial assistance, such as welfare, WIC vouchers and food stamps, according to the city of Modesto.

The south Modesto area has an even higher unemployment rate than the city of Modesto and Stanislaus County does as a whole. Estimates are that about 21% of the residents in the area are without jobs at present.

The city of Ceres, which has a population of 43,000, is near the Crows Landing Road future Fresh & Easy store location. Wal-Mart is currently building a 200,000 square foot combination food and general merchandise Supercenter in Ceres, just a few miles from the Fresh & Easy site. The Supercenter is slated to open later this year, according to the City of Ceres planning department.

As we've previously reported, Tesco currently has two other Fresh & Easy store sites planned for Modesto. One of those stores, located in the Sylvan Square Shopping Center in a former supermarket, was supposed to have opened by now. However, little if any work has been done to convert the vacant building set to house the Fresh & Easy market. Read our May 10, 2008 story: New Markets: Tesco's Fresh & Easy to Move Into Modesto, California Market; Open its First Store in the City Early Next Year.

The second location, at 1717 Oakdale Road in Modesto, also is slated to go into a vacant supermarket building. However, work on remodeling the building has yet to begin. Read our November 6, 2008 piece here: Upcoming New Markets News: Tesco Will Open A Second Fresh & Easy Store in Modesto, California.

The Crows Landing Road location, planned Modesto store number three, has some initial construction work started on it. The site is fenced-in and the "Fresh & Easy Coming Soon" sign is clearly visible from Crows Landing Road.

However, according to residents of the neighborhood, there hasn't been much if any construction work going on at the Fresh & Easy site recently.

This isn't a surprise to Fresh & Easy Buzz because it's our analysis that it's very unlikely Tesco will open any of its Fresh & Easy markets in Northern California this year, based on our reporting and research.

The Crows Landing Road location is substantially different than the other two Modesto store sites. Those two locations are in urban, middle-class residential neighborhoods. Plans call for those two Fresh & Easy stores to be housed in now vacant buildings in those neighborhoods that have a long history of being supermarket locations.

On the other hand, not only is the planned Crows Landing road location in a much lower income part of Modesto, the area also is very rural.

On the plus side, there are few full-service grocery markets in the area. There's a Latino-focused supermarket a few blocks away, located in what was once a Save Mart supermarket, along with a couple smaller Hispanic grocery stores and a convenience store not far away.

The part of Crows Landing Road where the Fresh & Easy site is located gets a considerable amount of daily commuter traffic. Numerous residents of smaller cities surrounding Modesto work in the city and use Crows Landing Road to get to and from work each day. That's why, for example, the Starbucks in the area is mostly a drive-through cafe.

In our analysis, based on the lack of full-service grocery markets in the Crows Landing Road neighborhood, along with the fact the area is a rural part of the city with a high percentage of low-income residents, the planned Fresh & Easy store therefore qualifies as a "food desert" location. "Food deserts" are neighborhoods underserved by grocery stores that offer a decent selection of fresh foods and groceries at affordable prices.

Interestingly, the residents we talked to about the planned Fresh & Easy market on Crows Landing Road in Modesto all thought it was either a conventional convenience store or fast food restaurant.

When told it was a combination grocery and fresh foods market, all were very surprised.

But it could be a moot point in the near -to- medium term since it doesn't look like plans call for the store to be completed soon.

Fresh & Easy Neighborhood Market has not confirmed any of the three locations for Modesto, nor announced their existence.

However, Fresh & Easy Buzz has documented the three sites in multiple ways, including visually, as well as through our commercial real estate sources, and through the California Alcoholic Beverage Control Department, for the Oakdale Road and Sylvan Square stores, because Tesco's Fresh & Easy applied for beer and wine permits for those two locations.

Based on our reporting and research though, its unlikely any of the three Modesto Fresh & Easy stores, along with those elsewhere in Northern California, will open this year. Stay tuned.

>May 10, 2008: New Markets: Tesco's Fresh & Easy to Move Into Modesto, California Market; Open its First Store in the City Early Next Year

>September 15, 2008: Wal-Mart Expanding its Discount Store-to-Supercenter Conversion Program As Part of its Strategy to Grab Even More Food and Grocery Sales Market Share

FYI: The Modesto Bee picked up your story. Ran today