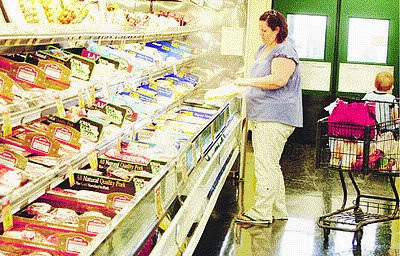 Lou Hirsh, a staff writer for the business section of the Press-Enterprise newspaper, which is based in and covers Riverside and San Bernardino counties in Southern California's Inland Empire region, has a piece in today's edition of the paper about the various ways shoppers are attempting to save money during the current economic downturn, which most economic experts like Stephen Levy of the respected Center for the Continuing Study of the California Economy in Palo Alto say has now likely become a full-blown recession in California.

Among the ways described in the story in which shoppers are trying to save money on food and groceries include:

Grocery Outlet and other salvage grocers buy these products in large quantities for a deep discount from manufacturers and in turn sell them in their stores for much cheaper than the same items sell for in most supermarkets.

For example, here's what Eric Lindberg, the co-CEO of the Berkeley, California-based Grocery Outlet chain says in the story about recent business in the stores:

Eric Lindberg, co-CEO of Berkeley-based Grocery Outlet, said his privately held company has seen "double-digit" increases in sales and foot traffic compared with last year at its 135 locations, which include stores in Hemet and Victorville.

Another interesting change in shoppers' habits is commented on in the story by Janet Little, who is the the staff nutritionist and spokesperson for the Henry's Farmers Market chain in Southern California.

Janet Little, a nutritionist and spokeswoman for Irvine-based Henry's Farmers Market, which has seven Inland locations, said the chain in the past year has seen lower demand for items like gourmet cheeses and increased purchases of its bulk items, such as sugar, flour and other ingredients that families are purchasing to make full meals at home.