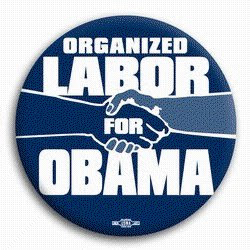 As our regular readers are aware, Fresh & Easy Buzz has been reporting on, writing about and analyzing the United Food & Commercial Workers (UFCW) union's efforts to unionize Tesco Fresh & Easy Neighborhood Market store-level employees throughout this year. We've broken news on the issue and have been one of the few publications of any kind to cover the UFCW-Fresh & Easy issue comprehensively.

We've particularly been surprised the California mainstream business and political press has not reported more on the issue to date.

The main reason we're surprised more ink hasn't been devoted to the UFCW-Fresh & Easy unionization story by the mainstream press, especially in California where the company is based, is because labor issues are a key aspect of the current race for U.S. President.

Rather, what is important is that Obama and McCain have very different opinions and positions on the Employee Free Choice Act. This piece of legislation, which passed by a majority vote last year in the U.S. House of Representatives and was defeated in the U.S. Senate by just a couple votes, would dramatically change the way labor unions are able to organize workers and how workers are able to choose union representation.

Senator Obama says is for the Employee Free Choice Act. Senator McCain says he is against it.

Under the act, workers would be able to select union membership by checking a box on a card rather than going through the secret ballot voting method which has been a part of U.S. labor law for decades. This is called the "card check system." If the majority of workers, say at a Fresh & Easy grocery store, checked "yes" on the card, that they want union representation, that would be sufficient to be recognized by the company as a union shop under the provisions of the legislation.

Those in favor of the Employee Free Choice Act, which in 2007 was a majority of U.S. House of Representative members and a near-majority of U.S. Senators (including some Republicans in both branches), say it's a more fair system for workers than the current secret ballot system.

Those against the act argue the "card check" aspect isn't fair because workers then aren't able to cast their votes in secret.

President George W. Bush is against the measure, so even if it would have passed the U.S. Senate last year, he had promised a veto.

Senator Obama has said if elected President he will sign a bill passed by Congress authorizing the Employee Free Choice Act.

Senator McCain has said he opposes the act. However, he hasn't gone as far as to say he would not sign the bill if passed by a majority in both houses of Congress. Many think if elected President he might sign such a bill as part of his history of reaching across the aisle, even though he says he currently is against the change from the secret ballot voting method.

Additionally, if the polls are right today, just eight days from the November 4 election, the Democratic Party looks to be set to pick up numerous new seats in the House and Senate. Of particular interest to those who support the Employee Free Choice Act is the Senate. If the Democrats were to pick up enough seats in the November 4 election to have a majority of 60 members, they would be able to pass any legislation such as the Employee Free Choice Act in a veto-proof way. The magic number to avoid a filibuster in the U.S. Senate is 60 votes.

If Senator Obama wins he has indicated he will sign the legislation. If Senator McCain wins it is far from certain if he really would veto the Employee Free Choice Act, since if the Democrats have a huge majority in both the House and Senate, which today's polls suggest will happen, he would have to pick his fights -- and the bills he decides to veto -- very carefully since without the support of the Democratic majority in Congress he would be unable to get much if anything done during his first term as President.

It's against this backdrop -- that Fresh & Easy Buzz has been extensively covering the UFCW-Fresh & Easy unionization issue, and that U.S. labor policy could be in for a major shift as a result of the November 4 Presidential and Congressional election, even if Senator McCain wins the Presidency -- that we're pleased to see the Los Angeles Times run a story in this morning's addition on the UFCW campaign to unionize Tesco Fresh & Easy Neighborhood Market store-level employees.

The piece, by staff writer Jerry Hirsch, doesn't cover a lot of new ground in terms of what we've been reporting this year on the issue. However, it does discuss in interesting detail what is a new confidence within the UFCW about its chances to unionize Fresh & Easy and other non-union food and grocery retailing chains, which is something we've noted in our reporting as well. It also offers a number of additional insights.

We should note that in our extensive reporting, which has included talking with many Fresh & Easy store-level workers, there is far from unanimous agreement among the employees about joining the UFCW union.

As we reported here on September 17, the employees of the Fresh & Easy store in Huntington Beach, California petitioned Tesco Fresh & Easy for union representation. The company denied the petition, as we reported on October 2, telling the employees to hold a vote on the issue per current U.S. Labor Law policy, using the secret ballot system. The store employees and the UFCW have been discussing doing just that. A vote among the store's workers has yet to be scheduled.

Additionally, we reported in this September 26 piece, employees of at least two other Fresh & Easy stores had been debating petitioning the company for union representation like the Huntington Beach store workers did. However, according to our sources, those employees have decided not to do so since seeing the response from the company in which they denied the Huntington Beach store employees request (which we predicted would be the case).

The workers at these two additional Fresh & Easy stores are thinking more along the lines of having a direct vote since they know that would be what the company tells them to do if they were to request UFCW representation via a letter, which is what the Huntington Beach store employees did.

But chain-wide it is a mixed bag among the many store workers we've talked with. Some want union representation, others are very much against it, and still others (the majority of those we've talked with) don't have much of an opinion on it one way or the other.

We've seen a similar pattern with Whole Foods Market, Inc. store-level employees who the UFCW has tried to unionize for years. There is a small core of Whole Foods store workers who want the union, a core of employees who are completely against it, and a middle -- those who are non opinionated about the issue and therefore have tended to side with the group that is against unionization. This group is sort of like the "undecided" in an election. They need to be persuaded. In the Whole Foods' case the company has been able to persuade them to oppose unionization.

However, the UFCW has gotten much farther, much faster with its Tesco Fresh & Easy campaign that it has with Whole Foods, for example. After all, the Huntington Beach store has been open less than a year and the employees have already requested union representation.

And of course, come next year when a new President takes power, particularly if it is Barack Obama, along with a Democratic majority in the Senate if that happens, which is likely, we predict the Employee Free Choice Act will be passed by both houses of Congress and then signed by a President Barack Obama -- and perhaps even by a Maverick President John McCain if he pulls it out and is elected on November 4. After all, Mavericks call themselves that because they do the unexpected; right?

This would mean the UFCW and other labor unions would have a much easier time organizing Fresh & Easy store and others employees. The workers would need only to check a "yes" or "no" on the "quick check card" to vote on whether or not they want union representation.

This explains to a large degree the renewed optimism expressed by the UFCW in today's Los Angeles Times story. It also explains in part why American organized labor is out working in full force nationally to elect Senator Obama and more Democrats to Congress.

Tens of thousands of union members are working in grass roots efforts across the U.S. for the Obama campaign, as well as donating more money to Senator Obama than they have to any other candidate for President in modern times. In fact, although "Joe the Plumber," who we were sad to find out isn't actually a licensed plumber, has decided to hit the campaign trail for Senator McCain, we are told by organized labor there are at least a couple hundred licensed, union plumbers campaigning for Senator Obama. We suspect at least one has to be named Joe.

As such, labor issues, including the UFCW-Fresh & Easy situation, should be receiving much more attention and coverage than they have been this year. We are doing our part by focusing on what just happens to be one of the hottest labor issues directly on our beat.