Business & the Economy: The Wisdom of Warren Buffett: On Innovators, Imitators and Idiots 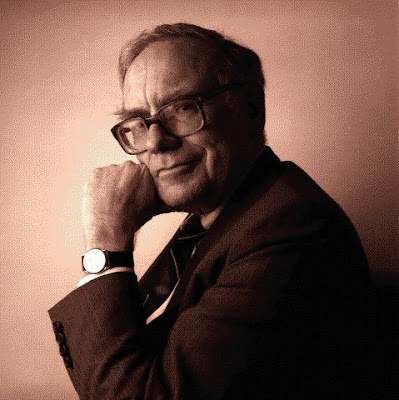 Warren Buffett is many things -- the second-richest person in the world right behind his good friend Bill Gates, who's charitable foundation Buffett is giving most of his $40-plus billion fortune away to; the founder of Berkshire Hathaway, Inc., the largest corporate holding company on the planet with ownership in over 100 companies; the world's most able and humble investor; an advisor to Democratic Presidential candidate Barack Obama; and as he is called when it comes to all things economic and financial, the "Oracle of Omaha" (as in the Nebraska city where Berkshire Hathaway is based and where Buffett lives).

Warren Buffett also happens to be among the largest (if not the largest) individual investors in Tesco plc., the United Kingdom-based global food and general merchandise retailer that owns and operates Fresh & Easy Neighborhood Market in the U.S.

Buffett holds about $1.4 billion worth of Tesco stock, which amounts to a 3% -to- 4% total ownership stake in the company, which ha annual sales of $94,621 billion in its most recent fiscal year. Tesco is the world's third-largest retailer, after number two Carrefour Group of France and U.S-based Wal-Mart Stores, Inc, which is number one. Buffett also owns between $1.5 and $2 billion of Wal-Mart Stores, Inc. stock.

Despite the current U.S. and global financial crisis and what looks like a resulting economic recession, the "Oracle of Omaha" is bullish on corporate America, along with business in other parts of the free world and China.

Buffett, who prefers to dine at one of the many Berkshire Hathaway-owned International Dairy Queen fast-food restaurants in the U.S. rather than at a fancy white tablecloth restaurant when he is on the road, has been the go-too-guy for numerous heavy hitters during the current financial and credit crisis and banking industry meltdown in the U.S. and abroad.

For example, the "Oracle of Omaha" serves as one of Democratic Presidential candidate Barack Obama's, who he supports for President, chief economic advisers. Republican candidate for President John McCain has even consulted Warren Buffett on the financial crisis, even though he supports Senator Obama.

In fact, during the last Presidential debate, when asked by moderator Bob Schieffer of CBS News to offer a few names of who he might choose as his Treasury Secretary if elected President, McCain mentioned only one name -- Warren Buffett. When asked the same question by the longtime CBS newsman, Obama also mentioned only one name, Warren Buffett, making sure to add Buffett is a supporter of his and one of his key advisers on all topics and issues economic and financial.

Treasury Secretary Henry Paulson has talked with Buffett about the U.S. Government's $700 billion financial services industry bailout program, as have the CEO's of a number of banks and corporations, including Wells Fargo, Goldman Sachs, General Motors and General Electric, to name just a few.

Buffett also is mobbed by everyday citizens and investors whenever he goes, all asking him for investment advise in these troubling economic times.

The "Oracle of Omaha" also is playing a major part in the current financial crisis in the U.S. In just the last two months he has made a multi-billion dollar investment in ailing investment bank Goldman Sachs, a $3 billion investment in General Electric, which is hurting because it's GE Financial Services division is feeling the credit crisis meltdown, and in his role as the largest individual investor in San Francisco, California-based Wells Fargo Bank was a major force behind the bank's $12 billion acquisition earlier this month of Wachovia Bank, which happens to be the financial services and credit card services banker for Tesco's Fresh & Easy Neighborhood Market.

In his Practically Radical column in today's Harvard Business Review Online, contributor Bill Taylor has a piece about Warren Buffett based on a one hour interview and discussion the investor had earlier this month with Charlie Rose, who hosts the popular Charlie Rose interview program on PBS.

In the interview, as Taylor writes about in today's HBR-Online, Buffett offered a simple yet insightful theory on how the U.S. got into the current financial mess.

Bill Taylor writes: "Leave it to Warren Buffett, one of the world's richest men, to offer the most valuable advice on this score. In a recent hour-long television interview, Buffet gave a masterful course on how the world got into this financial mess."

Taylor further writes: "At one point, his interviewer (Charlie Rose) asked the question that is on all our minds: 'Should wise people have known better?' Of course, they should have, Buffett replied, but there's a 'natural progression' to how good new ideas go wrong. He called this progression the 'three Is.' First come the innovators, who see opportunities that others don't. Then come the imitators, who copy what the innovators have done. And then come the idiots, whose avarice undoes the very innovations they are trying to use to get rich.

Buffet is too polite of a man to name the "idiots." But we can all guess who they are.

Click here to read Bill Taylor's full column (plus there are some interesting reader comments) in which he discusses Buffett's theory and offers some analysis of his own.

You can view Warren Buffett's interview and discussion from the Charlie Rose program at this link.

We don't see Warren Buffett accepting an offer either from Senator Obama or Senator McCain to be the next U.S. Secretary of the Treasury. At 75-years of age Buffett wants to continue running Berkshire Hathaway (he is currently picking a successor) and involve himself in other endeavors. It's not that the "Oracle of Omaha" isn't a patriot. Far from it. Rather, he is far more valuable in a role such as key advisor to a President rather than being put in the nuts and bolts position of Treasury Secretary. It would be a bad fit for Buffett to be in a nuts and bolts position like Secretary of the Treasury.

Secretary of Commerce might be an interesting position for Buffett though, particularly in an Obama administration because he has a strong relationship with the Democratic candidate who he supports for President.

Commerce has always been more of a ceremonial position, although it is a full cabinet department.

However, Commerce Secretary's who have had strong relationships to a President like Buffett has with Obama (Don Evans, the first Commerce Secretary for President George W . Bush and his longtime friend, for example), can be extremely influential and successful. Since Secretary of Commerce is less nuts and bolts than Treasury Secretary, it also allows a man for all seasons like Warren Buffett to impact a much wider range of economic, business and consumer issues than he would be able to do as Obama's Treasury Secretary, for example.

In fact, Commerce is the perfect position for a cheerleader for American business, which Buffett is. Not only could Warren Buffett continue to advise a President Obama (or even a President McCain) on key economic and finance-related issues as Secretary of Commerce, he could travel the U.S. and the world -- which he does already -- talking with corporate CEO's, investors and government leaders on a daily basis.

Buffett also would be a major confidence builder for U.S. business and the economy both at home and abroad. Additionally, the "Oracle of Omaha" already has relationships globally with Presidents and corporate chief that not even Obama or McCain currently have. And Buffett is widely respected throughout the world.

We can't think of a better Secretary of Commerce -- and one who should be given very broad portfolio by any President he serves -- for these trying times than the "Oracle of Omaha," Warren Buffett.

He is a man who not only rides (metaphorically) in the real "Straight Talk Express," but also only knows straight talk. Buffett walks the straight talk walk rather than just talking it.

The next President could use a trusted advisor like that. So could the country. And we think Buffett might just accept Commerce Secretary -- but would be reluctant to accept Treasury for the reasons we mentioned earlier.

>Click here for a selection of related stories about Warren Buffett and Tesco plc. previously published in Fresh & Easy Buzz.

>Click here to view the Web site for Buffett's Berkshire Hathaway, Inc. (Notice how Buffett extends his belief in frugality and simplicity to the design of the company Web site.)

>Click here for a list of companies owned by Berkshire Hathaway, Inc. The holding company owns a number of companies in the food and grocery space, including convenience store wholesaler Mclane Company, See's Candy Company, International Dairy Queen and The Pampered Chef.

>Click here for regularly-updated polls on the U.S. Presidential race between Democratic candidate Barack Obama and Republican candidate John McCain. The election is only seven days away, on November 4, 2008.
Posted by Fresh & Easy Buzz at 4:09 PM