Arizona Market Report: Fresh & Easy Opens Two New Stores; Marketside Opens in Three Days; Analysis of One Of the Most Competitive Markets in the U.S. 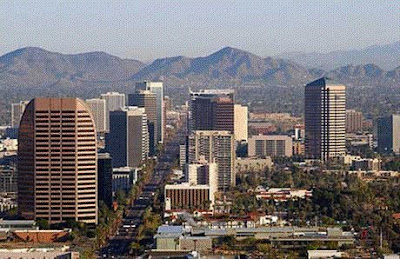 Tesco's Fresh & Easy Neighborhood Market opened two new stores this morning in the Phoenix, Arizona region (the Phoenix city skyline of which is pictured above): one at 12th Street & Bell Road in the city and the other at 7th Street & Thunderbird.

Tesco Fresh & Easy's total store count in Southern California, Southern Nevada and the Phoenix region is now 89. [Note: on Tuesday and Wednesday we published a couple pieces in which we stated there would be 90 Fresh & Easy stores. We were off by one. As of today there are 89.]

The two new Fresh & Easy stores opening today in the Phoenix area come just 3 days before Wal-Mart, Inc. opens (on October 4) its first 4 small-format, combination grocery and fresh foods format Marketside stores. The 4 Phoenix region Marketside stores -- in the cities of Gilbert, Mesa, Chandler and Tempe -- range in size from about 15,000 square feet -to- a bit over 17,000 square feet.

Tesco's Fresh & Easy Neighborhood Market pays it store level employees $9 an hour in the Arizona market, according to the company. All of the Fresh & Easy store-level employees (about 20-30 per-store) work part-time, accept for the store manager and sometimes the team leader (assistant manager).

Tesco's Fresh & Easy says all part-time store workers are given the opportunity to work at least 20 hours per week, which qualifies them for the company health insurance plan. Fresh & Easy says it pays 75% of an employees health care insurance, with the worker picking up the remaining 25%, along with co-payments and any other out-of-pocket charges.

Wal-Mart's Marketside has 4 store-level job classifications: the store manager, assistant manager, meal specialists and pantry controllers. [Click here if you want to read a job description for each one.)

According to a Marketside spokesperson, the starting hourly wage for the store-level Marketside associates in Arizona (not the manager and assistant manager) ranges from slightly over $10 -to- slightly over $11 an hour, in contrast to Fresh & Easy's $9 an hour wage for store associates. (The most recent job posting we viewed for a Fresh & Easy team leader was for $13 an hour and is part-time.)

The Wal-Mart Marketside spokesperson says its stores' assistant managers will mainly be full-time, and will make more than $13 an hour.

Wal-Mart's health benefit plan is similar to Tesco Fresh & Easy's in terms of the 75%--25% employer/employee split and the co-payments, along with being roughly the same in terms of coverage.

Wal-Mart also is offering its Marketside store-level employees a 401-k plan, along with Wal-Mart's program in which the company's employees can purchase shares of Wal-Mart, Inc. stock at a discount below that given day's current trading share price. Wal-Mart also offers a quarterly bonus program for store associates.

Both Tesco's Fresh & Easy and Wal-Mart (all its formats including Marketside) are non-union food retailers, as are the following other leading food retailing chains in the Arizona market: Trader Joe's, Costco, Whole Foods Market, Sunflower Farmers Market, Sprouts Farmers Market and a couple others.

Four of Arizona's top 5 food and grocery chains are United Food & Commercial Workers (UFCW)-affiliated union chains. These retailers include: Frys, Safeway Stores, Inc., Bashas and Albertsons. Wal-Mart, which according to 2008 market share statistics is now the number one food and grocery sales market share leader in the state with about a 24% overall share, is the only one of the top 5 that's non-union. [Sources for below include the Arizona Retailers' Association, Progressive Grocer, Shelby Report and U.S. Census Bureau. The share numbers have a few percentage point margin of error in either direction.]

Below is a market share breakdown among the top 5:

As you can see, the 4 unionized chains above represent about 60% of the total food and grocery sales market in Arizona. However, just a few years ago Wal-Mart just made the top 5 list, now its leading the pack.

Further, that lead will increase because the retailer is not only opening the Marketside stores in Arizona but far more significantly it continues to open numerous new Supercenters and new units of its Wal-Mart Neighborhood Market 45,000 square foot supermarkets, along with new Sam's Club stores --all of which sell food and groceries.

The union chain market domination is changing however not because of only the rapid growth of Wal-Mart in Arizona (especially its Supercenters), but also with the increasing number of new stores being opened in the market by Tesco's Fresh & Easy, Costco, Sunflower, Sprouts, Trader Joe's and a couple of other non-union food retailers.

Another interesting fact though is that the top 5 chains above control a total of about 84% of the Arizona market. This means all of the remaining retailers, including Fresh & Easy, are fighting over the remaining 16% share.

And if you take Costco and Trader Joe's out of the picture it means Fresh & Easy and the other remaining chains are fighting over about 10 -to- 12% of the market.

Additionally, you have to add the numerous multi and single-store Arizona independent grocers to this mix (estimated to be a total of 500 -to- 650 stores in the state), along with the many Hispanic ethnic format supermarkets. Nearly 40% of Arizona's population is of Hispanic or Latino ethnicity.

Then there's Target's discount stores, which sell lots of groceries, along with the drug chains Rite Aid and others. It's fair to call the battle for that remaining 16% share in the Arizona market a real "food fight."

Of course, all of the insurgent (the non top 5) retailers' share the goal of stealing some percentage share from the big 5 as well. But the market share numbers for the top 5 are current. They are what they are -- a demonstration that about 84% of the market's food and grocery sales is controlled by these 5 retailers.

Unionized supermarket chain store-level workers in Arizona operate under different classifications depending on the types of jobs they do in-store. The most common classification is a grocery clerk. These are the store workers who cashier, stock shelves, unload and breakdown freight in the backroom and do other merchandising tasks.

All three classifications get the same comprehensive union benefits package, which is payed for primarily by the supermarket company. Employees contribute a small portion through their union dues. The UFCW health care plan is considered one of the best among all industry sectors in the U.S.

UFCW unionized supermarket clerks also have a defined benefit pension program. A journeyperson store clerk who works say full-time for 30 years can earn annual retirement benefits of as much as $40,000 a year. Employers contribute the largest portion into the employee retirement plan. However, employees also make a contribution.

Many of the unionized chains like Safeway, Bashas, Albertsons and Frys, along with others, also offer store-level workers additional retirement programs outside of the union, in addition to their union pension plan. These include employee discount stock purchase plans (for public companies like Safeway) and employee profit-sharing programs (usually offered by the privately-held chains and independents).

The UFCW is aggressively organizing Fresh & Easy Neighborhood Market store-level employees to become unionized, along with conducting a multi-front campaign designed to bring Tesco to the table to discuss unionization of Fresh & Easy with the union's leaders, as we reported and written about often in Fresh & Easy Buzz.

Additionally, as we reported last month, the employees of the Fresh & Easy store in Huntington Beach, (Southern) California have filed a petition with Tesco Fresh & Easy's CEO Tim Mason, requesting they be formally recognized as a UFCW union shop. Tesco has yet to reply to the Huntington Beach store employees written request.

The UFCW has tried for many years to organize Wal-Mart store-level employees but has thus far failed to get a single U.S. store (that we are aware of) to request union recognition (and make it stick) like the Huntington Beach Fresh & Easy employees are doing.

Workers at a Wal-Mart store in Canada voted for UFCW representation some years ago, petitioning Wal-Mart, Inc. to officially recognize that store as a union shop. Instead, Wal-Mart closed the store, saying it was underperforming. Earlier this year however Canada's Supreme Court ruled Wal-Mart's closing of the store would be reviewed by the court, taking into account that Wal-Mart may have closed the store to stop the unionization. That hearing is pending.

The Arizona food and grocery market is a nice prize though. With about 6.3 million people the state has about $13.1 billion (2007 figure) in total annual gross retail food and grocery sales.

It's our analysis though --based on the market share numbers and a few other quantitative and qualitative criteria, that the Arizona market is in danger of becoming overstored, and perhaps already is.

Although many of the newer food retailing players in the market are niche players -- Trader Joe's, Sprouts, Sunflower Farmers Market -- which might buffet them compared to those going after the mainstream food and grocery dollar like Fresh & Easy is, there's only so much share of stomach in a given market.

The next 12 months will be a crucial period in terms of observing if there's going to be any shakeout -- retailers cancelling new store opening plans and closing underperforming stores, for example -- in the Arizona market, particularly in the Phoenix Metro region which has the highest concentration of food and grocery stores in the state, as well as being the area in which all of the players have been and are opening most of their respective new stores.
Posted by Fresh & Easy Buzz at 12:33 PM

Thanks much for the information.

We had the first store listed as 12th & Bell just for shorthand reasons. But we added Street after Bell because we apprecite you're taking the time to comment. We love being very detailed.

We also changed Avenue (7th) to Street. Thanks for that. (We got that address from the company, by the way.)

Would be great if you could drop us an email at freshneasybuzz@yahoo.com. We have numerous store employees we correspond with -- and we keep all confidential. Would like to have another in the Phoenix region as that is currently where we have the fewest.

Just mention you are the person who left the comment when you email us, if you would.