Special Product Focus: Long Live Newman's Own and its Charitable Mission: Newman's Own on A New Product Introduction Rampage; Next Up Frozen Pizza 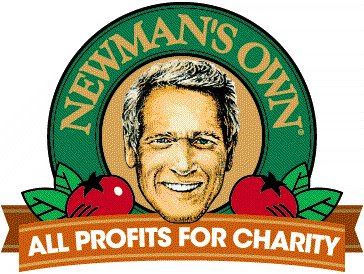 Ladies and gentlemen, start your ovens -- natural and premium foods company Newman's Own is getting in the ready-to-bake frozen pizza business.

According to Mike Harvard, vice president of marketing for Newman's Own, the all-natural, premium frozen pizza's will be competitively priced with the leading national frozen pizza brands. This has been one of the keys to the fabulous success of the Newman's own brand in fact. While offering a premium-quality product, be it salad dressing, pasta sauce, popcorn or ready-to-drink lemon aid, the food company always made sure to price the brand close to or just slightly higher than other national, mass market brands in the respective categories, even though its products are all-natural and of premium quality.

Asked why frozen pizza's are the newest line extension for Newman's Own, Harvard says: "For 25 years, our consumers have loved our all-natural products that help make delicious meals. So, we figured, why not make it easier and provide the whole meal. Our new pizzas deliver what consumers want --delicious, convenient meal solutions the whole family will love," 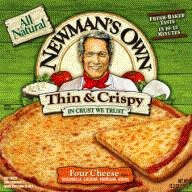 "I guess you could say we've jumped from the salad bowl onto the pizza pan," Harvard adds.

Of course he is referring to the fact the very first category Newman's Own began with 26 years ago was ready-to-pour salad dressings. We see lots of potential synergies between the two product lines, such as salad dressing and frozen pizza FSI coupon cross promotions, in-store tie-ins and the like.

The new frozen pizza line is being launched in stores this month in five test market areas. Those market regions are: New England; Albany, NY; Milwaukee, WI; Minneapolis, MN; and Charlotte, NC. Harvard says Newman's Own has plans to expand to other U.S. markets next year and roll the frozen pizza line out nationally by 2010.

Newman's Own Thin and Crispy pizza retails for a suggested price of $6.49-$6.99 for pizzas that range from 12.3 oz. to 14.7 oz, according to marketing vice president Harvard.

That Newman's Own is introducing its new line of frozen pizzas just shortly after the death of Paul Newman is particularly bittersweet because along with popcorn (and pasta and Lemonade), pizza is said to be the award winning actor's other favorite food.

The Newman's Own brand frozen pizza's go from the freezer to the oven, taking only 10-12 minutes to bake, according to the company.

All four of the premium, thin crust frozen pizzas are trans-fat-free. Additionally, The crust is made with flaxseed, all-natural cheeses are used in all the pizzas, the roasted garlic chicken pizzas are made with only all-natural white meat chicken, and the pepperoni on that variety and on the Supreme pizza is uncured. The Supreme Pizza variety contains sausage, uncured pepperoni, green, red, yellow peppers, onions and cheese.

There are no artificial ingredients or colorings in any of the Newman's Own frozen pizzas, according to company marketing chief Mike Harvard.

Newman's Own is on a new product introduction rampage.

It's not an accident the food marketer's two newest product lines are both in the ready-to-eat and ready-to-heat segments.

Mike Harvard says a major segment focus of the company's new product development efforts is in the meal solutions sector. These are food products of various types that are ready-to-eat with either zero or only a slight (like adding milk to cereal or baking a frozen pizza) effort needing to be added by consumers. In other words, most of the value has already been created and added by the products' manufacturer.

Prior to introducing the new breakfast cereal line, Newman's Own introduced a new line of shelf-stable marinades named Dress Up Dinner Marinades, along with a new line of salad dressings in sprayer-style bottles called Newman's Own Natural Salad Mists.

These two new lines fit into the meal solutions strategy from the opposite end in that they are convenient, value added products that can be used by consumers to aid in the preparation of and to enhance a meal with very little preparation -- marinading chicken with the marinades and then simply baking or grilling, and spraying the salad dressing misters on a packaged salad mix and simply eating, for example.

Newman's Own was founded on a lark by Paul Newman and his buddy, the writer A.E. Hotchner, in 1982 in the kitchen of Newman's Westport, CT USA home. Newman and Hotcher, who wrote a best selling biography of Ernest Hemingway and the famous memoir King of the Hill about his life growing up in St Louis, Mo. during the Great Depression, along with many other works, made up a batch of Newman's favorite salad dressing -- the company's first commercial product sold at retail stores -- and gave it away to friends and family members for Christmas, creating a label that said "Newman's Own" in part as a tongue-in-cheek joke.

From there as is often said -- the rest is history. The company was launched by the pair with one key proviso -- that all of its profits after expenses would be donated to charity.

Newman and Hotchner followed up the salad dressing line with popcorn, ready-to-drink lemonade and pasta sauce. Today Newman's Own produces and markets 175 different varieties of food products in the U.S. and internationally.

And of course Newman's Own has even produced its own food company offspring, Santa Cruz, CA-based Newman's Own Organics, which was founded by and is run by Paul Newman's daughter, Nell Newman.

Still based in Westport, Conn., the charitable mission of Newman's Own is expressed in its Company motto: "Shameless exploitation in pursuit of the Common Good."

The food company's charitable mission is reflected in the following statement that will appear on every package of Newman's Own products: "The Newman's Own Foundation continues Paul Newman's commitment to donate all after tax net profits from this product and related royalties for educational and charitable purposes," says company marketing chief Mike Harvard.

The statement is being added to every Newman's Own product package to reflect Newman's wishes and plans that the company and its charitable mission live long after his death.

The Newman's Own Foundation, which is the charitable arm of the food company, have given over $250 million to thousands of charities since its founding in 1982. That's impressive. And a wonderful legacy for Paul Newman to leave.

Their products don't compete very well from a nutrition standpoint. First example that comes off the top of my head is pasta sauce: theirs has more fat and I believe significantly more carbs than the Fresh & Easy house brand that I buy as an equal.

With a frozen pizza, to me the big concern is the amount of salt. We'll see how they do in time, I guess.

Below is the ingredient list off of a jar of Newman's Own Tomato and Basil Pasta Sauce:

If you (or any other readers) would post the ingredient list like that above from a jar of Fresh & Easy brand Pasta Sauce (either a plain or tomato basil variety) -- then we can have a comparison of the two brands right here.

That would be nice.

Fresh & Easy has a fresh & easy brand tomato-basil marinara sauce in glass jars similar to Newman's Own. Last time I checked it sold for $2.25 a jar -- that was a couple months ago.

That would be a great one for you, or any reader, to post the ingredients list of here. Would be a perfect comparison (like varieties) to the Newman's item.

The fat content on the Newman's might be a little high. But the fact it has no trans-fats is a big plus.

There are many brands that have less fat, even fat-free, but with no fat there can be a trade-off in taste.

The sodium is a bit higher than ideal as well.

fresh & easy brand is the clear winner on that criteria in terms of lower total fat.

fresh & easy brand wins there as well in terms of lower Saturated Fat.

Readers can compare the rest if you like. I wanted to compare the items the first commentor
mentioned, primarily fat and sodium content.

fresh & easy brand is clearly lower in fat and sodium content across the board compared to the Newman's Own. I think the fresh & easy tomato basil is likley the same as the just tomato the reader posted, since the only difference would be basil is added -- I think.

However, can't verify the two skus would be the same. If somebody has the ingredient data on the fresh & easy brand tomato-basil marinara sauce -- feel free to post it.

Don't forget about taste. I've tasted both the Newman's and the Fresh Easy sauces. To me the Newman's is far superior.