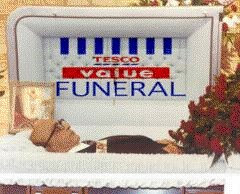 With a nearly 35% market share in the United Kingdom, Tesco is head-over-heels that nation's leading retailer. It's to the UK, what Wal-Mart is to the U.S.--the 500 pound big-box Gorilla.
Like Wal-Mart in the U.S., Tesco in the UK seems to open two or three new stores every week. If the mega-retailer isn't opening one of its huge superstores or hypermarkets, it's opening a smaller Tesco Extra store, or an even smaller Tesco Express, its small-format UK version of a Fresh & Easy Neighborhood Market.
Similar to Wal-Mart in the U.S.--which has numerous municipalities and community groups througout the country trying to stop the the brawny big-box brawler from Bentonville from opening its Supercenters in their towns--so too does Tesco have similar groups in the UK, that feel the retailer has enough stores already, and will do whatever it takes to keep a Tesco store out of their respective neighborhoods.
The humor publication, The Daily Squib, has its own take on Tesco in the UK. One of the Squib's star writers, a fellow by the name of Grzegorz Teodozjusz Januariusz (haven't used the Z key that much in years), offers his analysis and opinion on what he says is Tesco's latest retail format brainstorm. Read the piece here.
Posted by Fresh & Easy Buzz at 4:21 PM