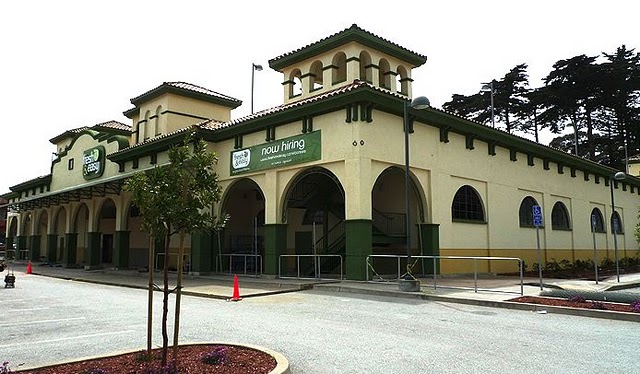 The next new Fresh & Easy store Tesco will open is the unit at 32nd and Clement in San Francisco, pictured above. The Fresh & Easy market, Tesco's first in the city, opens June 22.

United Kingdom-based Tesco plc today offered a sales percentage-focused summary report for the first quarter of its 2011/12 fiscal year, which began February 27, 2011 and ended May 28, 2011, including listing sales growth percentages for its Fresh & Easy Neighborhood Market chain in the Western U.S.

The continued growth in comparable-store-sales is a good trend for Tesco with its Fresh & Easy chain because the metric measures sales at stores open at least one year, which means it doesn't include sales growth from new stores opened during a given quarter.

Today's reported 21.9% gain in overall sales for Fresh & Easy Neighborhood Market includes those new stores opened between March and May 28, 2011. All 11 of the new stores were opened from March 2 to the end of April 2011.

It plans to open one new Fresh & Easy store this month. That store, the first unit in San Francisco, is set to open June 22.

As we've written about previously, although the comparable-store-sales growth trend at Fresh  Easy is a positive one for Tesco, in our analysis it needs to be noted that part of the reason for the significant growth is due to the retailer's continued use of its 10% -to- 25%-off discount coupons, which Fresh & Easy Neighborhood Market has been distributing on a chronic basis since 2008, with only a break of a couple months in 2009.

For example, Fresh & Easy Neighborhood Market has had one or more of the store coupons, which allow shoppers to take deep-discounts off their total purchases - $5-off-$25, 6-off-$30, $10-off-$50, ect., for example - in distribution essentially at all times during the first quarter of this year, posting the vouchers online and distributing paper coupons each week in its advertising circular, along with sending out special coupon books (particularly in Northern California) that contain even more coupons.

As such, we won't get a "real" comparable-store-sales metric from Tesco for Fresh & Easy until it stops using the discount coupons as a regular part of doing business rather than in a promotional manner, which means far less frequently.

Ask yourself this: What if Walmart, Kroger Co. or Safeway Stores, for example, all had 15% -to- 25% off coupons in distribution nearly everyday during each of its respective first quarters Would you not expect each of those chain's comparable-store-sales to be higher due to the artificial lift provided by the chronic use of the vouchers? Any reasonable person would answer yes.

Using the coupons even as frequently as once or twice per quarter is promotional. Distributing the coupons the way Fresh & Easy does - chronically - is an artificial sales-lifter.

And in Fresh & Easy's case, since it has a whopping negative-38% margin, as reported in February of this year, we suggest Tesco would stop using the coupons so regularly if it was confident it could have the same or even similar comparable-store-sales without them.

However, as you can read about here, the retailer continues to lose a substantial amount of money on Fresh & Easy, despite CEO Philip Clarke's pledge to break-even with the chain of 175 stores located in California, Nevada and Arizona by the end of Tesco plc's 2012/13 fiscal year, which is only 21 months away.

Based on our reporting and analysis, we haven't seen any indication at Fresh & Easy that would lead us to believe Tesco's first quarter loss was significantly better on a percentage basis than what it reported in April 2011 for the 2010/11 fiscal year.

Additionally, based on its continued chronic use of the discount coupons - Fresh & Easy eats the full-percentage discount (15%, 25%, ect.) with the coupons, which goes to margin loss - along with pricing and general heavy competition in all its markets, we also doubt there's been a significant improvement in the negative 38% margin at Fresh & Easy Neighborhood Market.

But the first quarter double-digit comparable-store-sales growth is a positive indicator for Fresh & Easy, even though in our analysis it reflects the artificial sales lift provided by the chronic use of the margin-killing store coupons.

Our conservative estimate (and it's just an estimate based on our coverage of the chain) is that about 25%-30% of Fresh & Easy's 11.1% comparable-store-sales growth for the first quarter can be attributed to the chronic use of the coupons, which would mean a more "real" comparable-store-sales growth percentage for the first quarter would be about 8.5%, which is still positive.

But retailers can discount all they want to achieve whatever comparable-store-sales numbers they're after - or hope to get. So 11.1% is what it is, the reported percentage growth achieved for the quarter at Fresh & Easy Neighborhood Market.

But in order to break even with Fresh & Easy, Tesco has to start losing a whole lot less money, pure and simple.

Therefore, among other things, that will require achieving a far better than negative 38% margin, regardless of comparable-store-sales growth numbers.

Tesco CEO Philip Clarke also said today the 11 Fresh & Easy stores in Northern California "have started strongly, with weekly sales per store of $150,000 in their first quarter. We assume he means the $150,000 in average weekly sales is a blended average of all 11 stores, since we know directly of more than one store in the region that isn't doing $150,000 a week in sales.

Sales in the Northern California stores - the first two units opened March 2 and the last batch of stores at the end of April - are being greatly aided by very heavy discounting in the form of the deep-discount store coupons, as we reported in this March 21, 2011 story: Fresh & Easy Neighborhood Market Flooding its Northern California Store Neighborhoods With Margin-Busting Store Coupons. The discount coupon blitz in Northern Caifornia has continued since then to today.

Tesco reported an overall sales increase of 7% for its UK business, which represents nearly 70% of its global sales.

Comparable-store sales (like-for-like) in the UK were flat though at 1.0%. And when non-gasoline sales and the UK's value-added tax are factored in, Tesco's first quarter like-for-like sales were negative, as you can see in the chart at the link below.

You can view Tesco plc's first quarter management statement here. It includes a sales percentage breakdown for all of Tesco's operating divisions in Europe and Asia, as well as at home in the UK, and its Fresh & Easy chain in the U.S.

September 26, 2008: Tesco PLC, Fresh & Easy and the Numbers Game; Will Tesco Release Hard Numbers For Fresh & Easy Next Week? If So, Will They Be Meaningful?

The UK non fuel like for like sales increase was actually negative when the effect of the UK government increasing VAT and other taxes is taken into account. This was better than many other retailers in the UK, but not as good as a major competitor (Sainsburys).