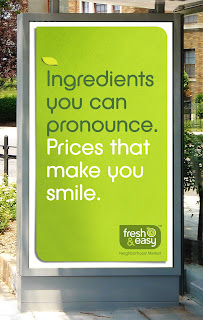 United Kingdom-based Tesco today reported its biggest yet one-year loss for its 172-store U.S. Fresh & Easy Neighborhood Market chain, which has now been operating in California, Nevada and Arizona for 3.5 years. The first Fresh & Easy stores opened in November 2007.

In this piece yesterday - April 18, 2011: Tesco Reports FY 2010/11 Sales & Profits Tomorrow - More Red Ink at Fresh & Easy Neighborhood Market - we detailed what is a very disturbing three-year trend for Tesco's Fresh & Easy, which is this: As the chain's annual revenue grows, so do its annual losses.

This trend is significant because Tesco's strategy for Fresh & Easy is the exact opposite - it's been saying since 2008 that as it grows annual revenues, efficiencies will be created and losses will decrease. But the facts (or trend-line) to date speak for themselves (as you will read in the story linked above) - Fresh & Easy lost $54 million more this year than last year, despite a healthy 42% growth in revenue and a solid 9.4% increase in comparable store sales.

There are currently 172 Fresh & Easy stores open and operating - 123 units in California, 28 stores in Arizona and 21 units in Nevada. Three new stores are set to open April 27, all in Northern California.

Tesco essentially offered a version of this same strategy today, saying those efficiencies will soon kick-in, and the losses will shrink, despite the fact the 2010/11 fiscal year loss is considerably higher than last year's loss - despite the 42% increase in revenue over the previous year.

Today Tesco said in a statement that's more spin than substance: "We expect losses [at Fresh & Easy] to reduce sharply in the current year as strong growth in like-for-like (the British term for comparable or same-store sales) sales continues and improved store operating ratios start to deliver individual shop-door profitability. Despite the higher losses in 2010/11, the overall business remains on-track to break-even towards the end of the 2012/13 financial year."

Clarke, who's visited Fresh & Easy headquarters and some of stores at least two different times since February of this year, as we've previously reported, also offered a vote of confidence for Tesco's El Segundo, California-based fresh food and grocery chain today, saying: "I've spent a lot of time with the Fresh & Easy team, and I remain confident that break-even toward the end of fiscal 2012/2013 remains a realistic objective."

From a break-even standpoint in the retail grocery business, a 100 store difference, in terms of sales volume and other metrics, is a big deal. As such, changing from the 400 units to 300 stores in a six month period (from October 2010 to today) is extremely fuzzy math, in our experience and analysis. Either someone was very wrong in October - or that same someone is very wrong today. One hundred stores is just too much of a variation when it comes to such projections.

Tesco has never previously said how many new Fresh & Easy stores it planned to open this year. However, based on information from sources, we reported in this piece last year that it planned to open 40-50 units this year. It appears we were right on, as about 40 units was the high-end of the old plan, and the 50 stores Clarke said today (the revision) will be opened this year is the new high-end. So far the grocer has opened 18 Fresh & Easy stores in 2011.

In our analysis though, Fresh & Easy's key problems can't be fixed by merely having 300 - or 400 - stores opened by 2013, as compared to the current 172 units. Why? The chain's problems are more fundamental than they are quantitative, as in store-count. (We will be offering more in-depth analysis on the issue in an upcoming piece.)

I am not sure if Fresh and Easy will be profitable before Tesco pulls the plug. However, the losses as a percentage of revenues/sales is decreasing all the time as for example the revenues have increased by 42% but losses have 'only' increased by 21%. With the US economy supposedly improving, this can only benefit Fresh & Easy.

Regarding Fresh & Easy's loss, you will see figures ranging from about $303 million -to- $308 million published in the U.S. media.

It's all based on how the conversion from pounds-to-dollars was done and when (conversion rates) it was done.

We went with a consensus of three different people who did the conversion rates independent of one another to arrive at our figure.

The same is the case with the $818 million sales figure.

We may be slightly on the high side of the $303-$308 million range noted above. And thus on the sales figure.

But we are aware of the differences published in the various accounts and are satisfied with what and how we arrived at our numbers.