Tesco is hoping the addition of more general merchandise items to its 175 Fresh & Easy Neighborhood Market stores in California, Nevada and Arizona, along with featuring items in the category more prominantly in displays, will help it grow the average market basket size purchases (the amount spent on each store visit) its customers make.

The more money a shopper spends each time he or she visits a grocery store is important in the grocery business because retailers operate on extremely slim profit margins, which are reduced even further by the items promoted each week in advertising circulars and in-store, along with - and particularly in Fresh & Easy's case because it uses them as a regular part of doing business - other vehicles like discount store coupons, in which the discount percentage comes out of the grocer's profit margin.

What grocers want customers to do is, along with buying the items offered on promotion and the basics on their shopping lists, to also pick-up impulse items offered for sale at full margin, such as that decadent chocolate cake from the bakery, a couple pints of Ben & Jerry's ice cream from the freezer case, a prepared meal from the deli, and household items like can openers and cooking pans, for example.

For those of you not familiar with the ways of grocery store merchandising, this is why you see inviting (and often higher retail priced) food and non-consumable impulse-oriented items like fresh flowers displayed in can't miss locations inside supermarkets, as well as why those useful household items like wine cork openers and ice cream scoops are displayed on clip-strips next to compatible grocery products on store shelves. It's all about getting shoppers to buy more items, hopefully at full margin, than they planned to before entering the store.

The general goal of such programs, which nearly every U.S. grocery chain uses in one form or another, is to create added sales by placing items on shelving strips throughout a store, tied-in to compatible products on store shelves, as a way to encourage shoppers to buy an item or two (or more) on impulse.

Who doesn't need another ice cream scoop, for example?

And there's always a better corkscrew than the one you've been using at home for five years.

How about measuring cups for the kitchen? Can never have enough of those, right?

Then there's the toys. Kids are the original impulse shoppers after all, regardless if mom likes it or not, although grocers need to be careful and not go to far with the toys, since mom may decide to shop elsewhere.

Since we reported on and detailed the new clip-strip program at Tesco's Fresh & Easy in our May 3 piece, we've noticed in our coverage of the food and grocery chain that its merchandisers and retail operations chiefs have been adding additional general merchandise items to the stores, displaying the products on end-caps and, in the words of one of our correspondents, on "clip-strips with legs."

For example, below is one of those "clip-strips with legs" that recently sprouted in most of the 175 Fresh & Easy stores. The photograph (as were the other two below) was taken by a Fresh & Easy Buzz correspondent in one of the grocery chain's stores last week.

The clip-strip rack, which includes kitchen items like ice cream scoops, pizza cutters, kitchen shears and measuring spoons, is attached to an end-cap display that features a variety of consumable and general merchandise items, all with a picnic or cookout theme. 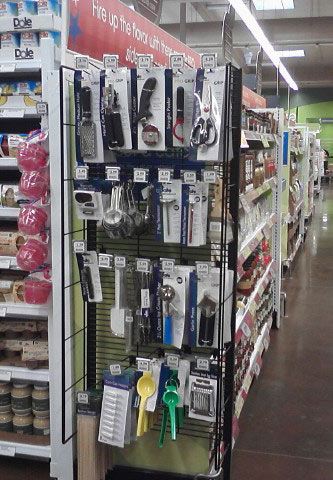 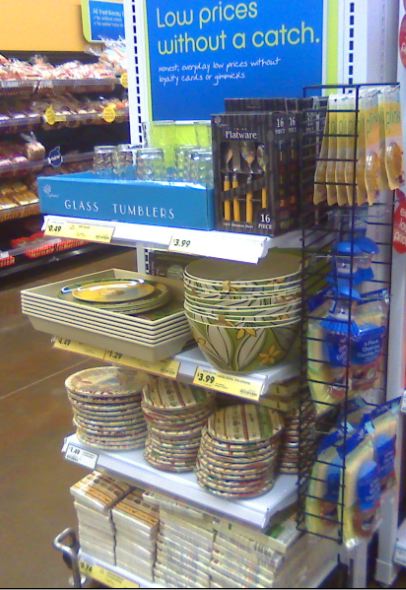 Also notice the related items on the "clip-strip with legs" on the side of the display above.

On the second end-cap (below), Fresh & Easy is offering an assortment of reusable carry bags in a variety of different sizes, shapes, colors and price-points. 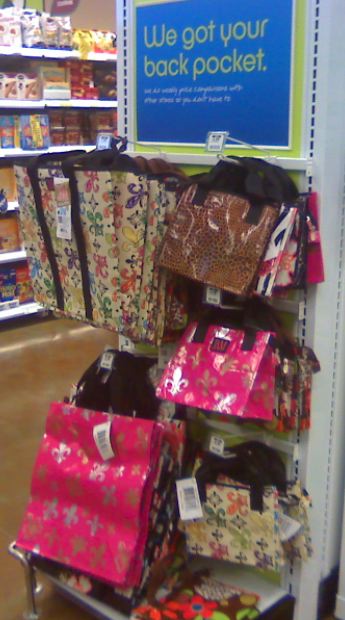 The clip-strip (including the ones with legs) and end-cap display programs are chainwide at Tesco's Fresh & Easy.

We offer three merchandising takeaways from Fresh & Easy's new strategy of increasing both the number of general merchandise items it offers in its stores and the more prominant display space the grocer is giving the category and items:

>When Tesco launched Fresh & Easy in November 2007, its merchandising plan was for the stores to be almost completely food-focused, offering only a very limited assortment of general merchandise items in the grocery markets, along with devoting very little if any off-shelf display space to the category.

That merchandising strategy has changed completely.

As you can see from our reporting here and in May, Fresh  Easy Neighborhood Market has embraced the general merchandise category, at least in a clip-strip and in-and-out off-shelf merchandsiing way, fairly strongly.

>Fresh & Easy's adding of the clip-strip program and increased displaying of general merchandise items on store end-caps, which is something nearly every U.S. grocer does to various degrees, demonstrates Tesco is begnnng to realize nearly four years after launching that it might be wise to emulate successful merchandising programs that have been tried and true in the U.S. food and grocery retailing industry for decades.

The big question with this form of imitation though is: Does it fit with the Fresh & Easy format? Our answer is no.

However, if it helps Tesco increase sales and average market basket purchase size in its Fresh & Easy stores, then at this point in the game for the retailer, whether the general merchandise push fits with the format or not is really a moot point. Although it is an important merchandising question in terms of its working because such programs, when not compatible with a given format, can end up as more of a negative than they canbe  a positive for a grocery chain.

Therefore it's probably wise to experiment as much as it can from a merchandising standpoint if it hopes to come close to break-even in 21 months.

It's impossible to tease out to any precise degree how much a given merchandising program can contribute to those two metrics, unless such a program is a major one and there aren't numerous other merchandising changes going on at a chain at the same time.

Neither is the case with Fresh & Easy. The general merchandise program is small and incremental-oriented, although still significant.

It's also one of numerous changes and additions Tesco is currently making at Fresh & Easy Neighborhood Market.

Tesco is counting on the general merchandise emphasis and the other changes and additions detailed in the stories linked above, along with the continued use of its discount coupons and other promotional vehicles - plus a new television adverising campaign it's preparing to launch in Southern California, where 101 of the 175 Fresh  Easy stores are located - to keep comparable-store-sales at Fresh & Easy growing at or near double-digits between now and the end of its 2012/12 fiscal year, when CEO Philip Clarke says the United Kingdom-based global retailer will break-even with its U.S. chain.