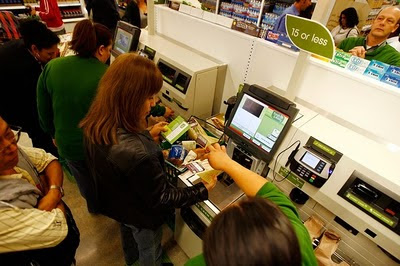 Assembly Bill (AB) 183, which if it becomes law will ban the sale of alcoholic beverages at self-service checkout stands in grocery and other format retail stores in the Golden State, passed the full California State Assembly by a huge margin on May 26 - 48 members voted for and 26 voted against the bill's passage - and was sent to the Governmental Organization Committee in the California State Senate June 2.

The California State Senate Governmental Organization Committee will be discussing and debating AB 183 next week. A spokesperson for the committee told us late last week the committee could vote on the legislation as early as the end of the upcoming week.

Ma has five co-authors for AB 183 in the California State Assembly, all Democrats. Those co-authors are members Blumenfield, Furutani, Huffman, Mendoza and Solorio, respectively.

We said AB 183 would pass by a significant majority in the California State Assembly. (See the list of past stories at the end of this piece).

We've also said that based on our reporting and analysis, we expect the self-checkout booze ban bill to also pass in the California State Senate, which could be voting on the measure as early as before the end of the month or by mid-July, depending on how fast AB 183 makes it through the committee process.

If as we're predicting, AB 183 does pass in the California State Senate, it will then be up to Governor Jerry Brown as to if the bill becomes law.

The Governor hasn't said publicly if he is in favor or against the legislation.

But based on our discussions with a couple co-authors of AB 183, along with some comments its author, Assemblywomen Ma, has made recently, plus additional information from other sources, the probability the Governor, who is a lifelong Democrat, former two-term California Governor and and ex-chairman of the California Democratic party, will sign the bill is much higher than the probability he will veto the bill.

AB 523 failed to pass in 2008. AB 1060 passed in both houses of the California State Legislature in 2010 but was vetoed by then Governor Arnold Schwarzenegger.

This time around though Assemblywoman Ma's AB 183 not only has as much or more support in the California State Senate, where AB 1060 passed by a margin of 22 (for) to 12 (against) in 2010, it also has the likely support of a fellow Democrat in the Governor's office - Jerry Brown.

Among other things, the Governor needs all the support he can get from Democrats to help him pass a budget, which he still hopes will include an extension of various tax increase that are set to expire this year, although even with the support for the tax increases from every Democrat in the state legislature, Brown still needs at least five Republicans to cross party lines in support of his budget and tax increase extension proposal. So far he has none.

Since the author of AB 183, Assemblywomen Ma, is also second in leadership in the California State Assembly, her support, along with that of Speaker John Perez who also supports AB 183, is key to keeping all the Democrats on board the budget and tax increase extension, which is another reason Brown is likely to sign the self-service checkout ban legislation into law rather then veto it if (or perhaps we should say when) it passes in the California State Senate.

If it becomes law, AB 183 would add Section 23394.7 to the California Business and Professions Code, essentially making it a condition for holders of (and future applicants) off sale beer and wine permits and liquor licenses to agree to not sell alcoholic beverages of any kind using self-service checkout stands in their stores.

Instead, the bill as currently written require a face-to-face interaction between a store employee and a customer when the customer is purchasing alcohol, which is why Tesco's Fresh & Easy Neighborhood Market will most likely have to add at a minimum one clerk-staffed  full-service checkout stand in each of its 126 stores in California.

Tesco has 175 Fresh & Easy stores. In addition to the 126 units in California, there are 28 stores in metropolitan Phoenix, Arizona and 21 grocery markets in metro Las Vegas, Nevada.

Fresh & Easy Neighborhood Market calls its self-service checkout system "assisted checkout" because when asked store clerks will assist customers, or even do it for them, with checkout. Based on our analysis of the legislation, along with comments made by Assemblywomen Ma, AB 183's author, this process would not be enough however to qualify as the face-to-face interaction required in the legislation.

We broke the news on a number of changes United Kingdom-based Tesco plans to make at its 175 store Fresh & Easy chain in this May 18, 2011 story: Major Changes Coming to Tesco's Fresh & Easy Neighborhood Market Stores. A number of publications have since offered stories (or reprinted the May 26 one from Bloomberg) using the "changes at Fresh & Easy" news peg (see here and here) we were the first to report on (with no mention of us as the original source of the information) and so far the only publication to report on in detail.

If, as we've noted in a number of past stories (see the related story links below) in Fresh & Easy Buzz, AB 183 becomes law, Tesco can add another change at Fresh & Easy. This change however - possibly having to add at least one full-service checkout stand in its California stores - won't be of its own design our desire. Instead it will be an external change mandated by the State of California.