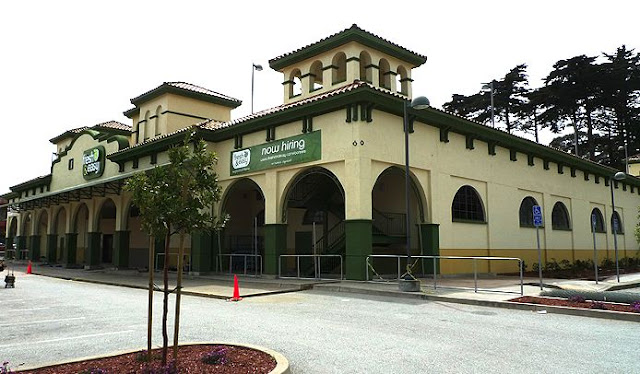 ﻿The exterior of the 32nd and Clement Fresh & Easy store (above) is 99.9%  completed. All that's needed are some minor stucco repairs and touching up. [See photo-use guidelines at bottom.]

We stress "plans" to open because as we regularly note in the blog, new store opening dates are fluid and subject to change at Fresh & Easy Neighborhood Market, as evidenced by numerous past examples.

However, based on our multiple source information about the opening date, we have a high degree of confidence that unless something unforeseen happens between now and about mid-June, the doors to the former Albertsons supermarket and soon to be small-format Fresh & Easy fresh food and grocery store at 32nd Avenue and Clement Street in San Francisco's Outer Richmond District - often referred to as being in the heart of San Francisco's fog belt - will open for business on June 22.

Tesco's Fresh & Easy Neighborhood Market has not announced the planned opening date for the San Francisco store at 32nd Avenue and Clement Street, or for that matter that it plans to open any stores in any of its current market regions in June.

The 32nd Avenue and Clement Street Fresh & Easy store also has a unique twist - a CVS Pharmacy drug store will be located in the same building, with an entrance located next door to the Fresh & Easy market, as you can see in the photograph above.

Construction is also currently going on inside the CVS drug store.

A work crew is at present working full eight hour days, six days a week, to get the 32nd Avenue and Clement Street Fresh & Easy grocery store ready for its planned June 22 opening. 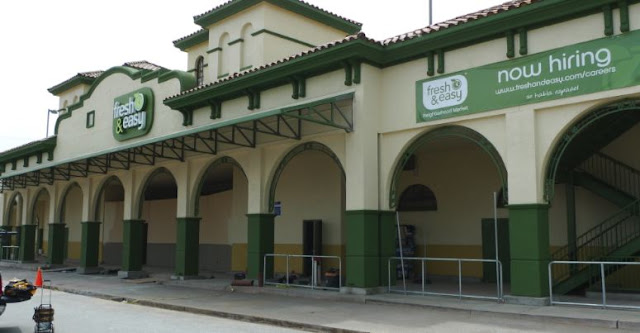 The Outer Richmond District store's exterior is essentially finished, needing just a few minor touch ups, as you can see in the two recently taken photographs, above and at top.

Work inside the store has a considerable amount to go before the store is ready to open, although progress is rapidly being made.

The in-ground plumbing and electrical are completed, and when we visited the site recently the workers were hanging the sheet rock, as you can see in the photograph below, which was taken during that recent visit. 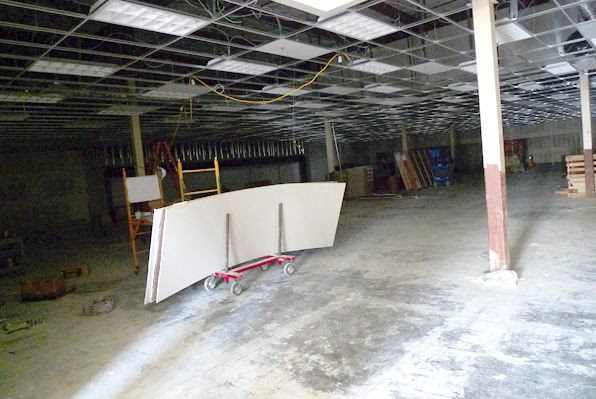 From there, because the Fresh  Easy interior package is fairly modular, workers can install refrigerated and freezer cases, shelving, check out stands and other interior features rather rapidly. For example, we've seen more than one Fresh & Easy store at the same stage as the 32nd Avenue and Clement Street interior is at completed in 4-6 weeks' time.

Fresh & Easy Neighborhood Market, which currently has 175 stores in California (126 units), Nevada (21 units) and Arizona (28 units) is taking the month of May off from opening new stores, after having opened 21 units so far this year - 11 in Northern California and 10 in Southern California.

Of the 126 Fresh & Easy grocery markets in California, 101 units are in Southern California, Eleven stores are in Northern California; and there are seven units each respectively in the Bakersfield and Fresno metro regions.

Below are the locations (with dates opened in bold) of the 11 Fresh & Easy Neighborhood Market stores in Northern California: