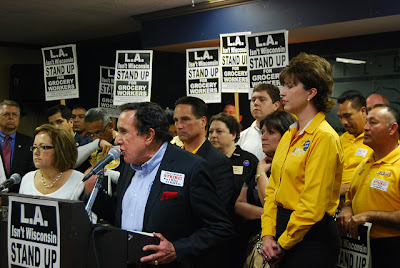 The ongoing contract negotiations between the United Food & Commercial Workers (UFCW) union in Southern California and the region's "Big Three" grocery chains - Kroger Co.-owned Ralphs', Safeway's Vons and Albertsons, which is owned by Supervalu, Inc. - took a turn closer in the direction of a strike by union grocery clerks today when the presidents of the seven union locals in the region and leaders of the Los Angeles County Federation of Labor held a rally and press conference late this morning at the federation's headquarters in downtown Los Angeles.

Attending the event in support of the UFCW locals and its members were numerous representatives from labor unions representing police officers, firefighters, teachers, truck drivers, warehouse workers and even actors and entertainers, along with union members who work in stores owned and operated by the three supermarket chains.

The many representatives of the allied unions, which are a part of the Los Angeles County Federation of Labor umbrella organization, said at today's press conference they would support the UFCW locals should they decide to go out on strike against the "Big Three" unionized supermarket chains, which also happen to be the three market-share-leading grocers in Southern California - Ralphs' being number one, followed by Safeway's Vons and Supervalu's Albertsons.

Talk of a strike was the topic on the minds and lips of the presidents of the UFCW union locals and their supporters today at the rally and press conference - and the rhetoric was heated.

For example, in describing the key sticking point between union negotiators and representatives of the three grocery chains, which is a proposal by the grocers to shift a significant percentage of employee health benefits now being paid by the retailers to store employees, Greg Conger, president of UFCW Local 324, called the health care benefits cost-shifting proposal by the "Big Three" chains: "A ruse that ignores the fact that these companies continue to post multi-billion profits annually. That isn’t an insignificant footnote," Conger said. "The impact of these proposals is a matter of life and death for some of our members."

All the Southern California UFCW presidents at the rally and press conference today said a strike against the three grocery chains could be coming soon, which was an obvious strategic attempt, as was the rally and press conference itself, to energize the ongoing contract negotiations, which have been going on since April and are at what is essentially an impasse over the health care benefit cost-shifting proposal by the grocers.

We aren't suggesting a strike might not be coming soon. Rather we're suggesting today's event is the opening salvo; a message of sorts to the grocery chains in advance of calling an actual strike, which the union and its members would like to avoid, as would the grocers.

Rick Icaza, president of UFCW Local 770 was blunt and to the point speaking today about the current state of the contract negotiations and his feelings about the likelihood of a strike happening, saying: "We're so far apart, if something doesn't happen soon, we will have a strike."

As we've previously reported, on April 21 union members authorized the UFCW locals to call a strike if and when it decides to. Since then contract negotiations have continued. In May a federal mediator was brought in at the request of the UFCW to assist with the talks. The strike clock gained a significant amount of time today.

The three grocery chains reacted to today's rally and press conference by issuing a joint press release in which they said: "We are still actively negotiating, and any talk of a strike is unnecessary. The only place where we can reach an agreement is at the bargaining table, and we believe our focus should be there, reaching a fair and reasonable contract."

As we've noted in our ongoing reporting and analysis of the contact negotiations, the grocers are serious about shifting a significant percentage of employee health costs to the workers. These chain's want employees to pay more out-of-pocket than they currently are (the cost-shifting) for monthly premiums, deductibles, co-payments and a couple other aspects involving the health care plans.

The UFCW said in late May the proposal submitted to it by the "Big Three" chains was unacceptable. Since then neither side has made a significant enough compromise. Therefore the talks have been and are at a stalemate in terms of moving forward.

A couple of our sources at the chains are telling us that if a strike is called there's a feeling of confidence among certain senior management people that because of the high unemployment rate in much of Southern California (the state has a 12.4% jobless rate) that they could hire replacement workers rapidly, which would come after the union calls a strike.

There's been discussion among the union locals about whether to strike all three chains at one time or one or two initially. Albertsons is the most often mentioned target we hear from our union sources if just one chain is chosen initially. But we are increasingly being told by our grocer sources that if one or two of the three chains is targeted  initially, the others will call an employee lockout in support of whatever chain or chains get hit with a strike first, in a united-we-stand solidarity pact.

The last time there was a major grocery strike in Southern California - the affected area includes all of Southern California to the Mexico border, the south coast to Mammoth, and the southern Central Valley - was in 2003. That strike lasted about five months before the grocers and union locals reached a contract agreement that was ratified by the union members.

In the nearly nine years since the 2003 grocery strike, the food and grocery retailing competitive landscape in Southern California  has changed considerably.

While Ralphs, Vons and Albertsons remain the "Big Three" market share leaders in the region, their overall and respective shares have been eroded considerably, primarily by a number of non-union food retailers in the region, including: Costco, Walmart, Target, Trader Joe's, WinCo Foods, Smart & Final, Whole Foods Market, Sprouts Farmers Market, Tesco's Fresh & Easy Neighborhood Market and a number of others, including more than one ethnic-focused grocery chain, plus dollar/99-cent and drug store chains, all after a share of the food and grocery dollar in mega-populated Southern California.

Combined, these retailers have opened thousands of new stores in Southern California over the last nine years, exerting significant competitive and price pressure on the "Big Three."

In fact, the vast majority of all the new food and grocery-focused square-footage in the region over the last eight years has been from these and other non-union grocers, as the "Big Three" have opened only a small number of new stores each year from 2003 to the present, compared to the non-union players.

It's just this phenomenon that presents a "Catch 22" when it comes to a strike by the UFCW union against the "Big Three" unionized chains - a strike against Ralphs', Vons and Albertsons would provide a major benefit to Walmart, Trader Joe's, Whole Foods Market, Tesco's Fresh & Easy and the other non-union chain's mentioned above, the store-level workers of which the UFCW is trying to organize in various degrees and hopes will eventually become unionized.

For example, nothing would make Tesco CEO Philip Clarke and his deputy, Fresh & Easy Neighborhood Market CEO Tim Mason, happier than to see the UFCW, which has been conducting an aggressive three-plus year campaign to unionize Fresh & Easy's store workers, call a strike against the "Big Three" chains so it could, it hopes, grab some much-needed added sales and business for its 108 stores in Southern California and the Bakersfield region in the southern Central Valley.

And ironically, the longer a strike against the three chains the better for Fresh & Easy, because in addition to allowing the fledgling 175-store chain to grab whatever added sales it could, a protracted strike would also allow new shoppers to become familiar with Fresh & Easy because in strike situations shoppers tend to seek out grocery stores they haven't shopped in before.

There are also about 2 million union members (if you include family members) in Southern California. A big part of organized labor's strategy in 2003, and it would be again this year, in a strike is to convince as any of those union family members as possible not to set foot in a grocery store owned by Kroger, Safeway or Supervalu, along with getting UFCW members and their families elsewhere in California and across the U.S. to boycott stores owned by the grocers.

The "Big Three" chains in Southern California, plus Stater Bros., lost over $2 billion in sales during the about five months the 2003 strike lasted. That's why the longer a strike lasts the better it would be for Tesco's Fresh & Easy and all the other non-union chain's mentioned earlier. Stater Bros., which is unionized and is the fourth-largest chain in the region, is negotiating on its own with the UFCW locals this time around. Historically it has participated in contract negotiations with the other three chains.

If you listen closely, you can even hear the sounds of ringing cash registers in the Southern California offices of those non-union food and grocery retailers, including at Fresh & Easy's headquarters in El Segundo, as the possibility of a strike against the "Big Three" chains gets closer to becoming a reality.