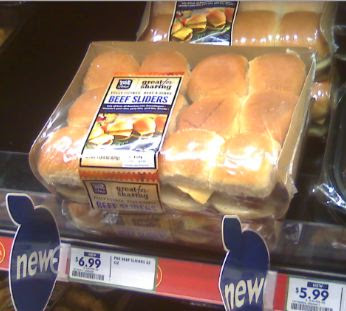 The heat & serve items also fit into a party or celebration foods' theme, although we suspect Fresh & Easy wants customers to purchase the new items on a far more frequent basis than that. 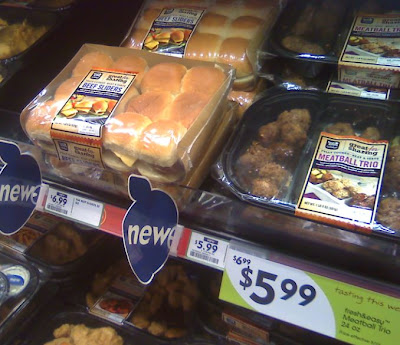 Assuming shoppers are pleased with the taste and retail price, the Beef Sliders (which include cheese) and Meatball Trio items should sell particularly well for Fresh & Easy because both foods are currently popular among American eaters.

The popularity is thanks in large part to the fact numerous restaurants, including in California where 126 of the 175 Fresh & Easy stores are located, have for a couple years' now been offering sliders and a growing number of meatball varieties on their menus on a much more regular basis than has been the case in the past.

This development in turn ties into the retro-comfort food trend that started to emerge in the U.S. in early-to-mid 2009, following in the wake of the housing foreclosure, bank crisis and recession that began in 2008.

(Twenty eight of the Fresh & Easy stores are in metropolitan Phoenix, Arizona. The other 21 are in the metro Las Vegas region.)

Sliders and meatballs also fit into the currently popular trend of small plate meals. Additionally, the mini burgers play into another popular eating trend (and not just for kids) - hand-held foods.

Restaurant food trends, particularly when they are sustained over a couple years time, are often a good indicator of what kinds of new fresh-prepared food items grocers will introduce into their stores, in case you want to keep score at home.

There's nothing new in general about offering sliders for sale in a grocery store, however.

For example, the very popular White Castle (brand) Sliders have been available in the freezer cases at most grocery stores in the U.S. for many years. In fact, Fresh & Easy Neighborhood Market sells the White Castle brand mini burgers, which are the creation and claim to fame of the restaurant chain of the same name that's become world famous for its sliders, thanks in part to Harold and Kumar.

It will be interesting to see how consumers respond to Fresh & Easy' refrigerated Beef Sliders because it's often the case that refrigerated foods containing bread or buns like the grocer's sliders often turn-out and taste rubber-like after heating them in the microwave oven, which is one of the reasons 90-year-old White Castle made its grocery store sliders a frozen food item when it decided to launch the product a number of years ago. 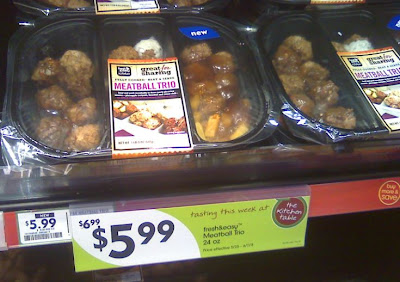 Meatballs, perhaps because of their comfort food nature, are currently a popular food item at present.

Fresh & Easy's offering of three different varieties (trio) in the package is a potentially good one because one of the things many restaurants are currently doing is creating different versions of meatballs, other than the well known beef and sausage staples.

For example, among the more innovative (and tasty) meatball varieties we've seen on restaurant menus over the last year include versions made using lamb, venison and duck.

Additionally, we haven't seen refrigerated, ready-to-heat and fully-prepared sliders or meatballs in very many grocery store prepared foods' sections thus far. As such, again assuming customers like the taste and price, the fairly early-mover status on the offerings could aid Tesco's Fresh & Easy Neighborhood Market in its sales of the new private brand prepared foods' items. 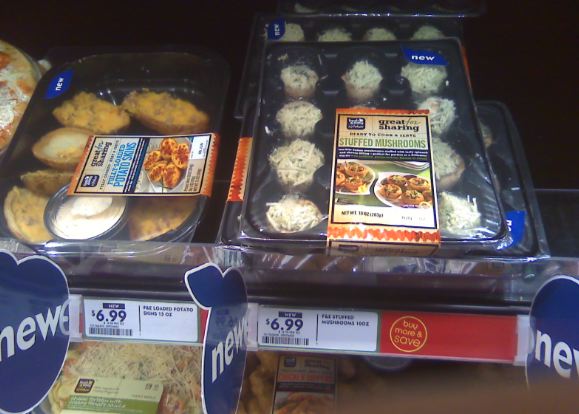 The other four new items, the two varieties of chicken wings, stuffed mushrooms and potato skins, are fairly common fresh-prepared foods items in grocery stores in California, Nevada, Arizona and elsewhere in the U.S.

For example, Safeway Stores offers all four items in its stores, as to numerous other grocers in the three states and specific market regions where Tesco has its Fresh & Easy stores. 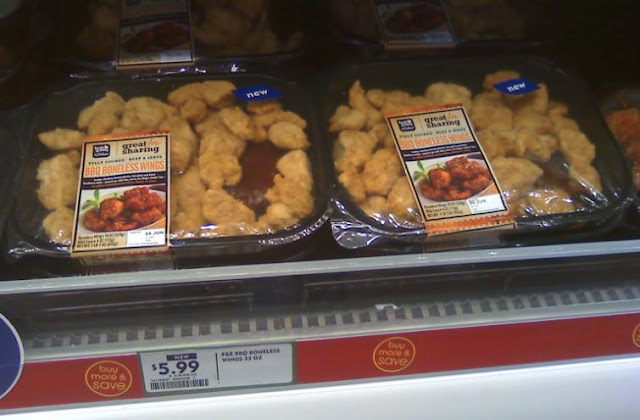 As part of the label on the new items, Fresh & Easy uses the tag line "great for sharing," as you can see in the photographs. The message appears in our analysis to be placed there in hope it will serve as a suggestion to shoppers to pick up an extra package or two to share with friends and family.

Having just launched the new private brand heat & serve items, the grocer is offering them at an introductory promotional price as a way to generate trial, along with sampling the snack-oriented foods at its Kitchen Table demonstration stations, which will soon be going mobile (see here), in all 175 stores. 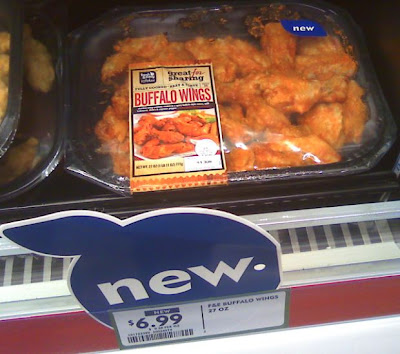 Readers: Click here to read the numerous past stories in our 'Private Brand Showcase' feature.

This blog has previously talked about how F&E does not cater merchandise to the local market.

Today at a Fresno location, I noticed Horchata by the milk, which I hadnt seen before. Maybe Ive always missed it, but perhaps this is an attempt to cater to the mexican market.

I also noticed Lactaid selling for $3.99, a full dollar more than the "bix box" stores F&E says they match.

Iunderstand Fand E are toopen earlier , have bakeries and cafes in store all good moves. What about two fullservice checkouts also try alarger store in one or two locations.Good luck the addition of the above will bring in many more customers.