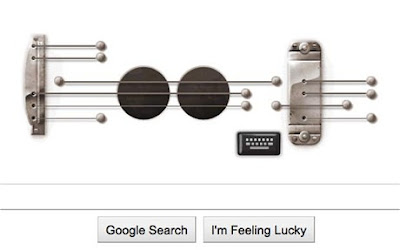 Google's most recent Google Doodle (here for a limited time only) is an interactive guitar that can be played using a computer mouse or by typing in words using your keyboard.

Google put the playable guitar up yesterday to commemorate what would have been the 96th birthday of guitar great Les Paul, who's also the inventor of the famous Gibson Les Paul Guitar.

Paul, who was born in 1915 and died in 2009, so loved the guitar he continued to play and perform into his 90's, doing so regularly at the Iridium Club, which is across the street from Lincoln Center in New York City.

You can learn all about Les Paul's life and music here. In fact, if you click this link you can listen to some famous musicians pay and play tribute to Les Paul and his music. We don't mind if you listen while you read this piece, as long as you can multi-task.

The Les Paul Guitar Google Doodle was so popular yesterday the folks at the GooglePlex in Silicon Valley are keeping it up today.

That's good news for Fresh & Easy Buzz readers because it allows us to share with you a fun little musical game we played for a bit last night, which we designed particularly for retail industry geeks. But you can do it with anything.

And 'doodle' we did.

First, some quick background: The interactive and playable Google Doodle guitar allows users to create music (or at least sounds) by running your mouse over the strings, as we noted earlier.

A number of professional musicians tried their hand at it yesterday and today, in fact.

For example, as a tribute to Les Paul, guitarist Tom Morello of Rage Against the Machine and Audioslave fame created a 30-second tune and posted it on YouTube. You can listen to his Les Paul tribute-tune using the playable Google Doodle guitar here.

The Google guitar also lets you create music by using your keyboard to type in letters and words. All you do is type whatever you desire into the narrow grey box below the guitar and to the left of the black button. Clicking the button allows you to record your creations.

If you haven't guessed it by now ... we did just that. But with our own food and grocery store-focused twist, of course.

And, we invite you to give it a try.

We wanted to hear musically what the names of various grocery companies, stores and supermarkets sounded like using Google's interactive and playable guitar.

So far so fun.

We have our favorites. But we're keeping them to ourselves, at least for now.

However, we suggest you go to the Google website (no link needed) and type in whatever and however many grocery store names you desire (such as your favorite store) in the box on the guitar and listen to the sounds. If you have any favorites, share them with us using the "comments" link below. If we get a couple comments with your favorites, we might offer a few of ours.

And if you work in the food and grocery retailing business, make sure you check out what your company and store names sound like using the playable guitar at Google.com.

But hurry because we aren't certain if the guys and gals at the GooglePlex in Silicon Valley are going to extend the Google Doodle guitar's appearance on the website beyond today.

Like they say in retailing - it's available for a limited time only.
Posted by Fresh & Easy Buzz at 12:03 PM

Really creative idea! My faves are Whole Foods Market and Sprouts Farmers Market. Maybe a little biased because they are two of my better customers. I expanded Safeway to Safeway Stores and it sounded better.