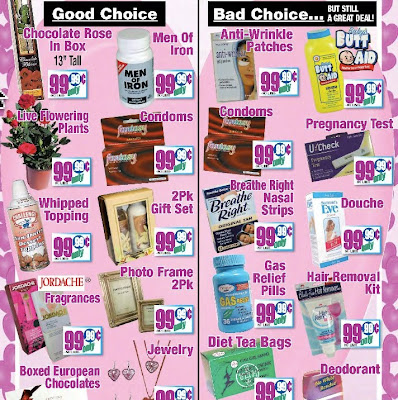 Commerce, California-based retailer 99 Cents Only Stores, which offers a strong assortment of perishable foods and grocery items in its 281 stores in California, Nevada, Arizona and Texas, appeals to men with its clever and funny Valentine's Day advertising circular (above) - "Attention All Romeos: Valentine's Tips From Your Friends at 99 Cents Only Stores - this week. View the full advertising circular here.

Valentine's Day offers a great selling opportunity for food and grocery retailers, particularly because it provides an opportunity in mid-February to sell many types of products in significant volume that, were it not for the special occasion, would move off the shelves at a slower, normal velocity.

Many of these products - gourmet candy, high-end floral bouquets, champagne and wine, steaks, seafood, non-food gift items and the like - are high-ring items that also in many instances have higher than average gross margins. A high item-ring plus higher than normal gross margin equals music (hear the cash registers ringing) to retailers' ears.

More music to retailer's ears: Compared to last year, the average shopper is expected to spend about 12% more on Valentine's Day gifts - an average of about $116 - than he or she did last year, according to retailing prognosticators who track holiday period sales.

Food and grocery retailers are well aware of the benefits Valentine's Day offers to both their top and bottom lines. That's why you see merchants go all out starting a couple weeks before the holiday, featuring Valentine's Day-themed in-store displays throughout every department. If its heart-shaped, for example, you'll see it in-store for Valentine's Day.

Nearly every food and grocery retailer in America also focuses its weekly advertising circular on Valentine's Day in the week leading up to today. Cookies, cupcakes, adult beverages, flowers, balloons, candy, gifts and cards, meats, seafood, gourmet foods, ready-to-heat gourmet meals and more are advertised at promotional prices beginning on the Tuesday or Wednesday before Valentine's Day, leading up to today.

As we do for each major merchandising holiday here at Fresh & Easy Buzz, this week we reviewed dozens of Valentine's Day-themed advertising circulars put out by grocers, mass merchants, dollar stores, drug chains and other format retailers located throughout the U.S.

The collective output is impressive, not only in the sheer number of items offered by retailers, but also because of the excellent prices offered this week for food, beverage and non-food items, all geared towards Valentine's Day.

But one retailer's ad circular stood out among the many we reviewed leading up to today, not because it's "better" than all the others but rather for its use of creativity and humor, tied-into its offering of various inexpensive gift items geared to male shoppers looking for Valentine's Day gifts for their sweethearts.

That retailer is the fast-growing Southern California-based dollar store format chain 99 Cents Only Stores, which this week took a clever and humorous angle in its Valentine's Day-themed ad, offering a variety of gifts "Romeo's" should consider buying for their sweethearts.

Unlike most other dollar store-format chains, 99 Cents Only Stores offers an assortment of perishable foods - meats, produce, dairy/deli - along with frozen foods and a strong selection of packaged food and grocery items (including gourmet and organic) in its 281 stores, which are located in California (75% of the units), Nevada, Arizona and Texas.

In the ad (pictured at top) headlined: "Attention All Romeos: Valentine's Tips From Your Friends at 99 Cents Only Stores," the retailer created two columns - "Good Choice" and "Bad Choice...but still a great deal" - each featuring items "Romeo's" should buy at the stores for their sweethearts.

Among the items in the "Good Choice" column include: chicken of the sea oysters, live flowering plants, condoms, whipped topping, a chocolate rose in a box and lady's lingerie, all for just 99-cents each.

Conversely, the "Bad Choice...But Still A Great Deal" column features items such as anti-wrinkle patches, a pregnancy test (see condoms in the good choice column) deodorant, diet tea, a mop and a broom, powdered Butt Aid and, perhaps as a companion item to the Butt Aid...douche. All of the "Bad Choice" items are also a mere 99-cents each, which demonstrates, at least in this case, that good choices cost the same as bad ones do.

[You can view the full ad circular and all the items here.]

The ad ends today. However, perhaps anticipating a rush by "Frugal Romeos" to the stores, 99 Cents Only has extended its stores hours, as noted in the circular.

But...back to that estimated average consumer spend of $116 this Valentine's Day, mentioned in the beginning of this piece. "Frugal Romeos" take note - and you still have time before the 99 Cents Only stores close today: You can purchase every single one of the items for your sweetheart on both the "Good Choice" and Bad Choice" lists featured in the 99 Cents Only Stores' ad circular - and still have plenty of cash left over for dinner out tonight at a decent restaurant.