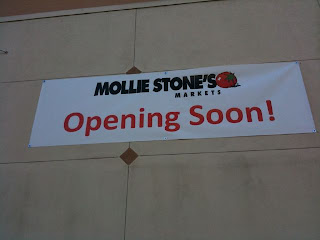 Privately-held Northern California grocer Mollie Stone's Markets is moving at record speed to open its newest grocery market, which is at 4201 18th Street, in San Francisco's Castro District.Fresh & Easy Buzz has learned the locally-owned and based eight store-grocer, which is headquartered in the Marin County city of Mill Valley just over the Golden Gate Bridge from San Francisco, plans to open its newest and ninth food and grocery store during the first week of March, less than three weeks from today.

The Castro District store will be Mollie Stone's third unit in San Francisco. (All nine locations are listed here.)

The upscale-oriented grocer, which was founded in 1985 by Mike Stone and David Bennett, who remain Mollie Stone's majority owners today, only officially closed on the deal for the Castro District building on January 28, as we reported here: January 28, 2011 - Mollie Stone's Markets Confirms Our January 13 Report; Announces New San Francisco Store Via Twitter & Facebook.

We first reported in November 2010 that Mollie Stone's Markets was attempting to acquire the store on 18th Street in the Castro district, which was being vacated by Delano's IGA Markets. [See these two stories for details - November 29, 2010: Veteran Grocer Harley DeLano's 'DeLano IGA Markets' Chain On the Verge of Closure in San Francisco Bay Area and November 30, 2010: DeLano's IGA Markets Closing Five Stores in San Francisco & Marin County; Fairfax, Davis Units to Remain Open (For Now).] 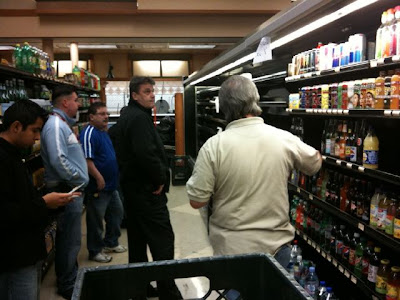 The crew above is busy creating shelf-sets inside the soon-to-be-opened Mollie Stone's store.

Mollie Stone's staff, along with the help of various workers and vendors, has been working at a feverish pace getting the small-format store on 18th Street in the Castro ready for its very early March opening. That work includes giving the store's interior and exterior a fresh look, completely resetting the shelves, considerable re-merchandising, and other tasks that normally take a grocer far more than a little over a month to accomplish.

Last Friday and Saturday the locally-owned and based grocer also held a job fare at its future market in the Castro District. Mollie Stones Markets' co-owner, Mike Stone, tells Fresh & Easy Buzz that about 325 potential store employees attended the event - 125 people on Friday, and over 200 on Saturday. The store is hiring for about 24-25 positions to start, according to Stone.

The soon-to-be Mollie Stones' store at 4201 18th Street in the city's Castro District has about 9,000 square-feet of selling space, and the grocer, which is expert at merchandising and offering a full selection of fresh foods and grocery products in small spaces - such as it does at its store in San Francisco's Pacific Heights neighborhood, "Mollie Stones Grand Central Market," which is about the same size as the Castro store - is making prudent use of every square-inch of those about 9,000 square-feet of selling space, according to our observations and conversations with people who've been working with the grocer on the store.

The Castro District neighborhood's demographics and lifestyle indicators are prime for natural, organic and premium/specialty foods and drinks, along with quality fresh-prepared foods, produce, meats, deli items and baked goods, for example. Mollie Stones specializes in those categories, along with offering everyday groceries in its stores - and is planning a major offering of those categories, including fresh ready-to-eat and ready-to-heat foods in its Castro market.

For many years before the 18th Street store became a Delano's IGA food and grocery store in 2006, its was a Cal Foods/Bell Market supermarket, owned by Kroger Co.'s Southern California-based Ralphs Supermarkets division, which pulled out Northern California (except for one Cala market on Nob Hill in San Francisco that will be open until the end of this year) a few years ago. It operated the Cala/Bell chain in the Bay Area, as well as numerous Ralphs' banner supermarkets in Northern California.

Fresh & Easy Buzz recently talked to a former sales representative for a natural/organic/specialty foods distribution company in the Bay Area that for many years distributed products in those above categories, both dry grocery and perishables, to the 18th Street store when it was first a Cala/Bell market, and then for a short time thereafter when it was a Delano's IGA. The former representative tells us that the Castro store was one of the top four-five, out of about 30 Cala/Bell stores, in the late 90's-early 2000's in terms of sales in those premium and natural-organic categories, including imported, high-end specialty food and beverage products.

The store is also about the only full-service grocery market in the 18th Street portion of the densely-populated neighborhood, which also makes it a good venue for sales of everyday food and grocery basics, assuming the pricing isn't too over-the-top.

Fresh & Easy Buzz knows the store fairly well, and has talked to numerous Bay Area food and grocery retailing veterans who also know it well, or better. Our bottom line: With the right merchandising, optimum category and product mix, proper customer service-level, ect., Mollie Stone's could eventually be able to do around $350,000-$400,000 in average weekly sales in the about 9,000 square-foot store at 4201 18th Street in San Francisco's Castro District, in our analysis. By the way, that's the kind of positive sales-per-square-foot any grocer would like to take home to mom, including one named Mollie.

Most residents of the Castro District shop at a good-sized Safeway Lifestyle format supermarket on Upper Market Street, where the Castro District comes to an end. Its a considerable trip from the immediate neighborhood where the soon-to-be Mollie Stones' store is located and that Safeway supermarket, which happens to be one of the chain's three-top performing stores in San Francisco (out of about 14 units), according to our Safeway sources at corporate headquarters in Pleasanton, which is about 35 miles from San Francisco in the East Bay Area.

As we said in our previous stories, the 18th Street-Castro District location should be a good one for Mollie Stones, based on information from sources with extensive experience in the market, our observations and analysis. But we suspect the locally-owned and locally-based grocery chain already knows that, which is one reason its preparing to open the store in record time - from the official closing of the deal on January 28, to the store's planned opening the first week in March, which is coming fast.
Posted by Fresh & Easy Buzz at 7:38 PM