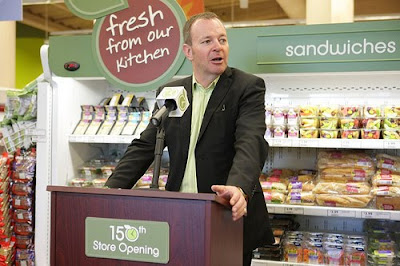 Just in: United Kingdom native and Fresh & Easy Neighborhood Market CEO Tim Mason (pictured at top) is on his way to becoming an "official" member of the California food and grocery retailing industry's CEO's club.

But in California, the CEO of a grocery chain, regardless if the chain is a homegrown operation or from foreign lands like Tesco's Fresh & Easy, isn't an official member of the CEO's club unless he (and all of the current CEO's of the state's major chains are men) or she sponsors a golf tournament, at least once.

You see, although golf was invented by the Scots in the United Kingdom, the California food and grocery industry long ago made it the "unofficial" "official" game for the industry and members of the trade. And as part of that proclamation, its become part of industry lore, unwritten of course, that a grocery chain CEO isn't really a California grocery industry CEO until he or she sponsors a golf tournament. I hope I'm not letting the cat out of the golf bag on this one.

And now, Fresh & Easy Neighborhood Market CEO Tim Mason can officially join the club. He's got a major golf tournament he, and Tesco's Fresh & Easy, can call his own.

The tournament is part of the Kraft Nabisco 2011 Championship, which is being held from March 28-April 3 at Mission Hills. [Click here for details.]

The fresh&easy Dinah Shore Charity Pro-Am was created by Alcott and Mason to accomplish a dual purpose. "They wanted to honor the legacy of Dinah Shore and the champions and stars of the Kraft Nabisco Championship, which during its 40-year history has showcased the very best of women’s golf, and to raise awareness and funding for important children’s education initiatives," says former 15-year LPGA staffer Connie Wilson, who's communications and sports marketing firm is involved in promoting the event.

A little background on the history of the event from LPGA-insider Connie Wilson:

"The Kraft Nabisco Championship is Celebrating its 40th year in 2011. It's been a part of the LPGA Tour since 1972, and was designated a major in 1983. Three-time champion Amy Alcott began a winner’s tradition of jumping into the lake at the 18th hole after her victory in 1991. The event was called the Colgate Dinah Shore from 1972-81 and the Nabisco Dinah Shore from 1982-99. Dinah Shore’s legacy is preserved with the 'Dinah Shore Walk of Champions' at the 18th hole at Mission Hills Country Club. In addition, a statue of Dinah Shore, serving as the walk’s focal point, was created by noted sculptor George Montgomery, who was Shore’s former husband. The lake at the 18th hole is named Champions Lake, while the winner jumps into Poppie's Pond. The tournament trophy is called the Dinah Shore Trophy."

A little added history and background from 'The Insider':

The late singer, actress and talk show host, Dinah Shore, was one of the first female golfers among the Hollywood show business celebrity set of her time back when golf was considered to be a game designed primarily for and played nearly exclusively by men. Not only was Dinah Shore, who was born in 1916 and died in 1994, a golfing gender role-breaking pioneer in Hollywood - she was good at the game. In fact, it's the stuff of Hollywood celebrity golfing legend that she could more than give avid Hollywood celebrity golfers with first names like Frank, Dino, Bob and Bing (hint: all four did some singing) a run for their money on the golf course.

Park Century School is a non-profit independent co-educational day school designed to meet the specific educational needs of bright children, ages 7 to 14, who have learning disabilities. The School serves students from communities in the South Bay to the San Fernando Valley and from Malibu to
Hancock Park, including the greater Los Angeles area.

LA's BEST (Better Educated Students for Tomorrow) is a nationally recognized after school education, enrichment and recreation program. It serves 28,000 children with the greatest needs and fewest resources throughout the City of Los Angeles. The organization's After School Enrichment Program provides a safe haven for children ages 5 to 12 at 180 elementary school sites each day during the critical hours after school, at no cost to parents. Established in 1988, LA's BEST is a partnership between the City of Los Angeles, the Los Angeles Unified School District and the private sector.

The pro-am golf tournament will feature 18 teams, with each foursome being led by a past Kraft Nabisco Championship champion or LPGA star, according to three-time event winner Amy Alcott, who says: "I am so excited to co-host this event with Tim (Mason) and provide an opportunity to celebrate the champions and rich history of the Kraft Nabisco Championship."Dinah (Shore) was a very close friend of mine and I know how much she loved the LPGA players and this event. She brought welcomed attention to all of us in the early days and it is wonderful to see her vision thriving 40 years later. This will be wonderful day of celebration for fans of women’s golf."

The golf tournament should draw a considerable amount of attention to Tesco's Fresh & Easy Neighborhood Market, particularly in Southern California where the April 2 pro-am golf tournament is being held, and where the fresh food and grocery chain has the majority, 110 units, of its 159 stores.

In fact, three new Fresh & Easy markets are opening today, all in Southern California. The three new stores - at Oceanside Boulevard & Vine Street, in Oceanside; Alameda Street & Florence Avenue, Walnut Park; and at Seaward Avenue & Thompson Boulevard, in Ventura - will give the Tesco-owned chain headed by Tim Mason 162 stores, with 113 of the markets in Southern California.

Additionally, with the sponsorship of the fresh&easy Dinah Shore Charity Pro-Am golf tournament, Tesco deputy CEO/Fresh & Easy Neighborhood Market CEO Tim Mason can now count himself as an "official" California food and grocery industry CEO, by virtue of the fact that he's joined the club by sponsoring a golf tournament of his, and Tesco Fresh & Easy's, very own - well along with its co-sponsors, of course.

"It’s so exciting to host the fresh&easy Dinah Shore Charity Pro-Am, where we can not only play alongside so many LPGA greats and celebrate the amazingly rich history of the Kraft Nabisco Championship, but also raise funds for two amazing children’s educational initiatives," says Mason. "Building on the huge success of our Shop for Schools program, which raises money for K – 8th grade schools, we are proud to support LA’s BEST and Park Century Schools, which are both inspiring and worthy organizations."

There you have it. A day on the links, with money being raised for two worthy charities, along with a golf tournament Fresh & Easy CEO Tim Mason can call his own. The LPGA golf champions and others scheduled to compete in the fresh&easy Dinah Shore Charity Pro-Am will soon be released, according to Connie Wilson. Meanwhile, for more information or to learn about sponsorship and playing opportunities, contact golf@freshandeasy.com, she says.

~February 15, 2011: Sprouts Farmers Market's Acquisition of Henry's to Be Announced This Week, As Early As Wednesday

~February 4, 2011: The UFCW Union Becomes A Player in the Sprouts-Henry's Acquisition Talks...As the Two Chains Move Closer to A Deal

~January 30, 2011: The Sprouts & Henry's Deal Talks: Smart & Final is Looking Like A Retailer That Wants to Make A Deal