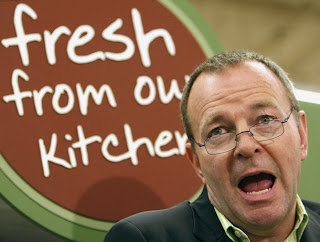 The Changing of the Guard at Tesco
News/Analysis/Commentary
Breaking Buzz: Fresh & Easy Neighborhood Market CEO Tim Mason (pictured above in a Fresh & Easy store) is tweeting, as in posting those no-greater than 140-character messages on one of the world's most-popular and fastest-growing social media and messaging sites, Twitter.com.
Mason himself, or one of his staff members, set up a Twitter feed in 2009 for the CEO, which for over two years hasn't been graced with a single tweet by the head of Tesco's El Segundo, California-based Fresh & Easy Neighborhood Market fresh food and grocery chain, which as of today has 164 stores in California, Nevada and Arizona -- until now.
The CEO of Fresh & Easy Neighborhood Market posted his very first tweet on Sunday, February 20, apparently shortly after enjoying a ski trip to Vail, Colorado, where he spotted First Lady Michelle Obama on the slopes. Tim Mason's first tweet on February 20, 2011: "Inaugural tweetThe first lady looking good skiing in Vail. Very cool in grey,same brand of ski jacket as my wife, I managed to get a photo."
The First Lady indeed was on a trip to Vail during the extended President's Day holiday weekend, as was announced by the White House and has been reported on by numerous national media outlets.
Mason looks to have enjoyed posting his first tweet on February 20; so much so in fact he followed it up with four additional tweets on the same day.
Two of those additional February 20 tweets involve a bit of lobbying Mason was doing at the California State Capital in Sacramento, including a visit with Assembly Speaker John Pérez (D-Los Angeles), who prior to getting elected in 2008 to represent the people of Los Angeles' 46th District was the political director for the United Food & Commercial Workers (union) Local 324.
The United Food and Commercial Workers (UFCW) union, including local 324, has been trying to organize Fresh & Easy Neighborhood Market's store-level employees since the first batch of stores were opened in November 2007, as we've reported on and written extensively about here.
Pérez was elected Assembly Speaker in January 2010. His career in the organized labor movement spans 15-years.
Here's what (italics) the CEO of Fresh & Easy Neighborhood Market "tweeted" on February 20, about a visit he had on Friday, February 18, with Assembly Speaker Perez: "Friday in Sacramento,speaker Perez gave me a plastic duck. Grand office,large plastic duck collection." 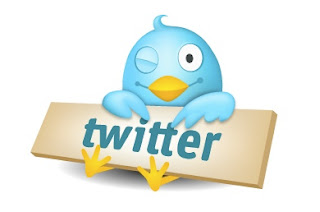 Interestingly, a second (the fourth out of the five tweets) February 20 tweet had to do with First Lady Michelle Obama, once again on the ski slopes in Vail.

The fifth February 20 tweet is about starting the day off with coffee beans from Fresh & Easy.
Mason followed up his five tweets on February 20 with one on February 21, one on February 22, and one yesterday, February 23, for a total of eight so far. Mason's last tweet, from yesterday: "The talk of the Capitol last week.Gov. Brown has replaced the table in his office with a picnic table.I guess so he can say this ain't no..." (There is nothing more after the no... Perhaps it's coming today?)
There were no February 24 tweets at the time this piece was published. But if the current track record holds out...expect at least one later today.
If you want to read the tweets not included in this piece, you'll have to find Tim Mason's feed on Twitter.com.
Mason currently has 40 followers - and is currently following three of those 40 followers - the Fresh & Easy Neighborhood Market feed, Fresh & Easy director of marketing Simon Uwins, who hasn't tweeted since October 1, 2009 and - most importantly - his new boss, soon-to-be Tesco CEO Philip Clarke, who's been "tweeting" since November 2010.
We're willing to bet Fresh & Easy CEO Mason's Twitter feed follower-count goes up a bit past the current 40-followers after this post is published.
As our 'The Insider' columnist reported yesterday - February 23, 2011: Incoming Tesco CEO Philip Clarke Visits America - And Fresh & Easy Neighborhood Market - the Fresh & Easy Neighborhood Market CEO's new boss, Philip Clarke, just recently spent 10 days or so, from February 6 -to- February 15, in the U.S., including at Fresh & Easy's Southern California headquarters with Tim Mason, who is adding the title of Tesco deputy CEO to his current one as CEO of Fresh & Easy.
Clark, who officially becomes Tesco's CEO in March but is already sharing duties with outgoing CEO Terry Leahy, comes to Tesco's corner office having held two senior executive positions at Tesco, which he joined in 1974 - head of Europe and Asia operations and chief of corporate information technology.
It's that latter position that makes Clarke a bit more keen on the Internet and particularly the use of social media that outgoing CEO Leahy was. And in November of last year, Clarke, who had been named Tesco's CEO-designate not long before that, started his Twitter feed, posting his first tweet on November 4, 2010.
As incoming CEO, Clarke is putting a greater emphasis on the use of social media, including Twitter, at Tesco, and among its executives, both those based at corporate headquarters in the United Kingdom and elsewhere around the globe.
Tesco UK has been using Twitter under Terry Leahy's charge. The retailer set up a food-oriented "Tesco Food" Twitter-feed last year, which its been using regularly.
In 2010 Tesco also started a couple special-interest Twitter feeds, including one focusing on clothing, which it sells in many of its stores in the UK, Europe and Asia. It's using the feed regularly at present.
Tesco has had a corporate Twitter feed, "Tesco Stores," since 2009. However, just two tweets, both posted on April 3 2009, have been made on the site despite the fact it has over 5,000 followers. We're told Philip Clarke plans to change that inactivity as part of his emphasis on the greater use of social media at Tesco.
Fresh & Easy Neighborhood Market launched its Fresh & Easy Twitter feed in mid-2008 and has been regularly active on it since then, using it well in a number of ways, in our analysis.
Fresh & Easy CEO Mason's first tweet, on February 20, 2011, came a mere five days after his new boss, Philip Clarke, departed Los Angeles on February 15 to return home to the United Kingdom, according to 'The Insider's column linked above and published yesterday.
If the timing between Clarke's arrival and departure at Fresh & Easy headquarters in El Segundo California - February 10 -through-February 15 - and Tim Mason's beginning to tweet on February 20, after having his Twitter feed sitting dormant for over two years, isn't simply a mere coincidence, which sources tell us it isn't, then it appears incoming Tesco CEO Philip Clarke is a pretty good motivator when it comes to social media adoption and use among his key executives.
Fresh & Easy Buzz, which is on Twitter @FreshNEasyBuzz, welcomes Tesco deputy CEO and Fresh & Easy Neighborhood Market CEO Tim Mason to Twitter.
And now that Fresh & Easy chief Mason is tweeting, we wonder if a new tweet will be forthcoming from Fresh & Easy Neighborhood Market director of marketing Simon Uwins, who's most recent update was in 2009.
After all, if Philip Clarke can motivate Mason to tweet for the very first time, Mason, who is Uwins' boss and prior to moving to the U.S. to head up Fresh & Easy in California was in charge of corporate marketing at Tesco in the United Kingdom, might want to follow Clarke's example, and have a Twitter-chat with Uwins, one marketing guy to another, letting him know that incoming Tesco CEO Philip Clarke doesn't like dormant Twitter feeds. Just a thought. After all, marketers should set the example when it comes to social media and social media marketing, shouldn't they?
Related Stories
We've written extensively in Fresh & Easy Buzz about the use of social media, including Twitter, in the food and grocery retailing industry, by Tesco's Fresh & Easy, other retailers, and in general. To read a selection of those stories, click on the following links: Fresh and Easy on Twitter, grocers and social media, Grocers on Twitter, Twitter, F-E Gal, iKristen.
Posted by Fresh & Easy Buzz at 12:32 AM