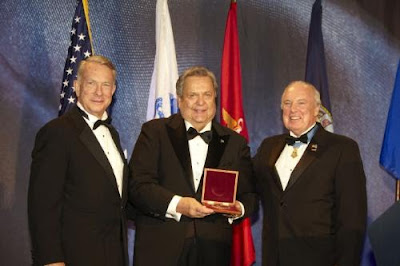 Stater Bros. chairman and CEO Jack Brown (middle) is presented with the Congressional Medal of Honor Society "Patriot Award" on Saturday, February 26, 2011, at the Ronald Reagan Presidential Library in Simi Valley, California. The award was presented by Vietnam Medal of Honor Recipient James A. Taylor (right). Pictured on the left is the co-host of the event, Bruce Brereton