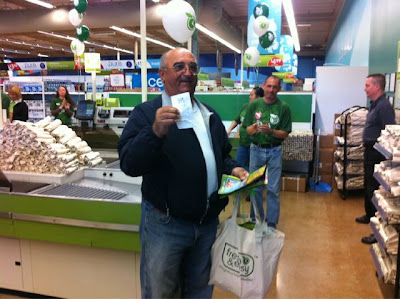 The first customer (pictured above holding up his register receipt) to make a purchase this morning at the just-opened Fresh & Easy market in Costa Mesa, California gets a round of applause from a couple store employees.

I luv the fresh&easy market, the problem is there is only one store in oceanside. im moving to down south to encinitas, where there are zero stores.
If you opened 2 f&e's, i can guarantee they would be packed w/ people all day&nite.
considering there were 21 f&e's in vegas, im sure they can afford it. future thank you