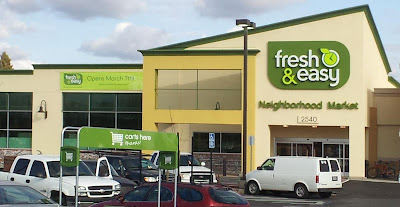 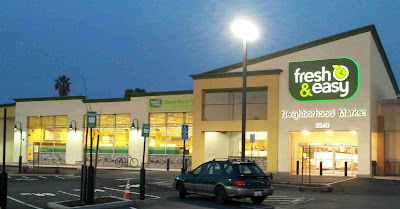 Pictured above is the Fresh & Easy grocery market at Watt Avenue & El Camino Avenue in Sacramento, which opens March 7. The photos were taken last week - the one at top during the day, the one above at night - as workers prepared the store for Wednesday's opening. [Photo credit: Fresh & Easy Buzz.]

In November 2011 Fresh & Easy Neighborhood Market said it would open a sixth store in the region, at 34th Street and Broadway in Sacramento's Oak Park neighborhood, before the end of March. Fresh & Easy hasn't announced an opening date for that store yet.

Fresh & Easy's Sacramento market region launch is long-awaited, as well as long-postponed, because it was in February 2008 when the fresh food and grocery chain announced its plans to enter the market, listing 19 store locations it said it would start out with.

Tesco and Fresh & Easy Neighborhood Market also decided not to launch into Northern California in 2010, again because of the chain's poor performance and numerous problems.

The opening of the first two stores in Sacramento on Wednesday, including the unit at Watt Avenue and El Camino Avenue pictured at top, comes a year and five days after Fresh & Easy opened the first two stores in Northern, in San Jose and Danville, as we reported here on March 2, 2011: Fresh & Easy Neighborhood Market Opens First Two Stores in Northern California Today.

We'll have a piece in the blog later this week offering analysis on Tesco's move into the metro Sacramento market, along with a competitive analysis of the key food and grocery retailing players in the region.

Suggested reading below: A primer on Tesco's Fresh & Easy in the Sacramento metropolitan market region

January 18, 2012: Fast-Growing The Fresh Market Chain On Track to Launch in California This Year