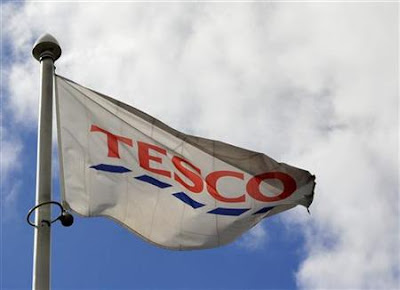 United Kingdom-based Tesco, which operates 5,400-plus stores in 14 countries, announced today it plans to eliminate its operations in one of those nations - Japan - while expanding its geographic reach across the Pacific Ocean in the Western United States by launching its Fresh & Easy Neighborhood Market chain into the Sacramento, California metropolitan region next year, as we reported it would do in this story on Monday (August 29): Meaningful Move or Too Little Too Late? Fresh & Easy Neighborhood Market Planning Early 2012 Metro Sacramento Market Launch.

The announcement today in the United Kingdom by CEO Philip Clarke, who took over in March of this year from Terry Leahy who during his 14-year term as Tesco's chief executive launched the global retailer into the largest (United States) and third-largest (Japan) countries in terms of total dollar sales of food and groceries (China is second), that Tesco would put its 129 small-format stores in Japan up for sale and exit the market overshadowed the announcement made today by Tim Mason, Tesco deputy CEO and CEO of Fresh & Easy Neighborhood Market, that the 177-store Fresh & Easy chain would enter the metro Sacramento, California market next year, beginning with the opening of six stores.

Tesco's Fresh & Easy Neighborhood Market currently operates as far south in California as the San Diego region, throughout Southern California, in the Bakersfield, Fresno and Modesto metro regions in the Central Valley, in the San Francisco Bay Area and in Vacaville, which is about midway between Sacramento and the Bay Area, along with operating stores in the Las Vegas, Nevada and Phoenix, Arizona metropolitan regions. There are 128 stores in California; 28 units in Arizona; and 21 Fresh & Easy markets in Nevada. (See here, here and here for detailed information.)

Mason, who is based at Fresh & Easy Neighborhood Market's headquarters in El Segundo (Southern), California where he remains CEO of the venture as well as serving as group deputy CEO of Tesco's global operations, a position he was appointed to in March 2011, made the announcement today at a groundbreaking ceremony held on a vacant lot at the future Fresh & Easy store at 34th Street and Broadway in Sacramento's Oak Park neighborhood.

At Mason's side was former NBA basketball star and current Mayor of Sacramento, Kevin Johnson, who's development company sold the parcel of land the store will sit on to Tesco in 2008. Johnson, who is a native of Sacramento and returned home when he retired from the NBA a few years ago, was raised in Sacramento's Oak Park Neighborhood. (See the story linked at top for more information.)

"I'm excited to welcome Fresh & Easy to our neighborhood," Mayor Johnson said at the ceremony today. "Fresh & Easy is not only bringing more good jobs to Sacramento, but also high-quality, healthy food at affordable prices to neighborhoods that don’t always have access to such foods."

CEO Philip Clarke's announcement today across the pond in the UK though is the one that generated the most interest from Tesco's investors and competitors - and the most ink from the press on both sides of the pond. In fact, little if any of the coverage we've seen so far today even mentions the announcement made today by Mason about Fresh & Easy's launch into the metro Sacramento market next year, which we wrote about Monday before the plans were publicly announced by the grocer.

A number of British publications are using Tesco's exit from Japan as a logical news hook however, asking and suggesting that Philip Clarke's next move might be to pull the plug on Fresh & Easy before the year is out.

That's not going to happen, based on our reporting and information, although the exit from the country on the other side of the Pacific Ocean will draw much closer attention from investors and the media to Tesco's U.S. operations than has been the case - expect here at Fresh & Easy Buzz - at least for the next week or so.

Clark said in a statement today Tesco is exiting Japan because the retailer has determined it's unable to build a business in the country of sufficient scale to make a profit.


"We have reviewed our portfolio in Asia and the performance of our business in Japan. Having made considerable efforts in Japan, we have concluded that we cannot build a sufficiently scalable business," he said.
"We have decided to sell our operations there and focus on our larger businesses in the region, in line with our priority of driving growth and improving returns. I want to thank our colleagues in Japan for their continued dedication to the business. With good stores in good locations across Greater Tokyo, we will be undertaking a formal sale process over the coming months and the business will continue to trade as usual in the meantime."
Tesco has been in Japan for eight years and has lost about £250 million  on the venture.

Unlike in the U.S. where Tesco started up Fresh & Easy Neighborhood Market from scratch, the retailer entered Japan in 2003 by acquiring the C2 Network, which ran stores under the Tsurakame name.

Its 129 stores in Japan are all small-format and trade under the Tsurakame, Tesco and Tesco Express banners.

Annual sales for the 129-store operation are £500 million ($812 million), making it the retailer's smallest operation out of the 14 (soon to be 13) nations it's in. Tesco reported sales of about $818 million for Fresh & Easy in its most recent fiscal year ended February 2011.

Tesco said today about half of its 129 stores in Japan are profitable.

Tesco's about $406 million loss over eight years in Japan pales in comparison to what it's lost in the three years and 10 months its 177-store Fresh & Easy Neighborhood market chain has been in operation in California (128 stores), Nevada (21 units) and Arizona (28 stores). That amount is about double the Japan lose and in less than half as many years. For example, Tesco lost $300 million on Fresh & Easy in its most recent fiscal year ended February 2011.

Meanwhile across the pond at the future store at 34th Street and Broadway in Sacramento's Oak Park neighborhood, Tim Mason announced the first six Fresh & Easy stores the grocer plans to open in the metro Sacramento region in 2012. The locations of those stores are:

As we reported Monday, Fresh & Easy Neighborhood Market is currently targeting early 2012 for the opening of the first one or more of the six stores. Based on our current information, the three units in Sacramento proper are likely to be the first units opened next year. That could change of course.

Five of the six stores are among the first batch of 19 future locations Tesco's Fresh & Easy Neighborhood Market announced in February 2008 it planned to open in the Sacramento/Vacaville region. Of those 19 stores, one unit has been opened so far, the store at Elmira & Nut Tree in Vacaville, which was opened earlier this year.

The Vacaville store is one of 13 Fresh & Easy units in Northern California Tesco has opened this year. Eleven of the stores are in the San Francisco Bay Area. Besides the Vacaville store, the one other unit outside the Bay Area is the store in Modesto.

Interestingly, the unit at East Natoma and Blue Ravine in Folsom, which is a suburb of Sacramento, isn't one of the 19 stores announced in February 2008. There is a store in Folsom on that list, which you can view here, but it's at Greenback & Madison.

The East Natoma and Blue Ravine location was acquired by Tesco's Fresh & Easy post 2008, as were a number of future store sites in the Sacramento area, which we've identified here and here.

On the other side of the Pacific, Tesco said today its putting its 129 small-format stores up for sale.

Based on the division's small market share of less than one half of one percent - which is about the same market share percentage Tesco has with Fresh & Easy in California, metro Las Vegas, Nevada and metro Phoenix, Arizona - and the not so great performance level of the stores (half profitable), we expect the UK-based global retailer to take a fairly serious haircut on any sale it agrees to. Japan's post-earthquake economy, which was so great before the quake and tsunami, also makes buying the stores a less attractive proposition, in our analysis.

Across the pond in the UK today Tesco CEO Clarke took great pains in a conference call with members of the press to downplay any comparisons between the retailer's decision to bow out of Japan and the potential for doing the same with Fresh & Easy in the United States anytime in the near future. He essentially said the two operations are very different in kind and by degree.

There's truth in that statement. But also some spin.

The central reason Tesco gave today for saying sayonara to Japan - that it doesn't see being able to build a business of proper scale and thus become profitable in the country - is a key factor in evaluating Fresh & Easy Neighborhood Market because Clarke, like CEO Terry Leahy before him, along with Tim Mason, all say the key to breaking even and then making a profit with the U.S. chain is to get acheive the proper "scalability" needed to achieve that objective.

That optimum "scale" started out in 2006 under Leahy as being about 1,000 Fresh & Easy stores over five or six years. later Leahy and Tesco amended that amount to around 500 stores during the same period of time.

Earlier this year Clarke said it would take 400 Fresh & Easy stores by the end of Tesco's 2012/13 fiscal year for it to break even with the chain. A couple months later Clarke said Tesco will break even by February 2013 with 300 stores, saying that's what's needed to achieve "scalability."

There are currently 177 Fresh & Easy stores, which is 123 units away from that 300-store magic number. Tesco's fiscal 2011/12 half-year just ended. The retailer will report half-year revenue and the profit/loss at Fresh & Easy in October. It will be interesting to see what the loss is in terms of it being a benchmark to what Clarke and Mason say will be break-even in 18 months, when the 2012/13 fiscal year end in February 2013.

Tesco attempted to achieve "scalability" for eight years in Japan. It's pulling out, having given as the key reason it's inability to achieve it.

Philip Clarke and Tim Mason are on the record as saying the key strategy to breaking even and eventually making a profit with Fresh & Easy Neighborhood market is to achieve proper "scalability." They've now defined that "scale" as 300 stores in operation by February 2013, at which time the two men say Fresh & Easy will break even.

Terry Leahy, considered Britain's wizard of retailing by his peers and most analysts, was wrong about achieving proper "scalability" in Japan, and that was after eight years rather than the five it will be in February 2013 for Fresh & Easy. It was up to Clarke to pull the plug on Japan, which in the greater scheme of things for Tesco globally was the correct move to make in our analysis.

But Leahy is gone and now it's Clarke's turn. And he needs to think long and hard about whether he, like Leahy was about Japan, is wrong about what it's going to take to get Fresh & Easy Neighborhood Market to break even in 18 months, not to mention become a viable business and start making a profit. In our analysis it is, after all, more than a "scalability" issue.
Posted by Fresh & Easy Buzz at 8:04 PM