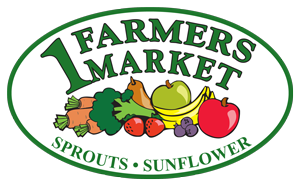 The Insider - Heard On the Street

Phoenix, Arizona-based Sprouts Farmers Market and Colorado and Arizona-based Sunflower Farmers Market decided to give the tens of thousands of attendees at the natural-organic products' industry's largest annual trade show on the west coast, Expo West, which began in earnest today in Anaheim, a little something to talk about on the show floor and in the always jam-packed area bars and restaurants this weekend.

It's also something the tens of thousands of you who've been reading my reporting about the deal between Sprouts and Sunflower since November 2011 have been waiting for - and which you learned about in Fresh & Easy Buzz months in advance of today because the publications writing about it today are doing so for the first time based on the press release - which is the announcement Sunflower Farmers Market is being merged into Sprouts, which will result in one farmers' market-style chain in the U.S. - Sprouts Farmers Market.

Today Sprouts and Sunflower announced they've reached a definitive agreement to merge Sunflower Farmers Market and its 35 stores into Sprouts Farmers Market, creating a chain of 139 stores with an estimated annual revenue of $2 billion, which is about the total annual sales amount I estimated in my past columns the combined chains would generate.

In the announcement today, Sprouts CEO Shon Boney said the deal is expected to close, pending regulatory approval, in the second quarter of this year, which is soon.

He also said the 35 Sunflower Farmers Market stores will be re-branded under the Sprouts banner by the end of 2012, following the same strategy and about five-month time frame Sprouts used in re-branding the Henry's units to the Sprouts' banner in 2011.

Sunflower's headquarters operations in Colorado (Boulder and Denver) and Arizona (Phoenix) will also be folded into Sprouts corporate headquarters in Phoenix, as was the case with Henry's headquarters in Irvine, California. Like in the Henry's case, Sunflower's offices will remain open for a while but be closed before the year is out.

The combined chain also plans to open up to 13 new stores this year, as I've previously reported. Those stores will all be under the Sprouts Farmers Market banner, Boney said today.

Here's what Andrew S. Jhawar, a senior partner at Apollo and the co-head of its Consumer and Retail Industry Group, said about the deal in the announcement release today: "We feel incredibly fortunate to be able to bring together the management and operations of these two growth-oriented grocery retailers who focus on natural and organic products. In doing so, Sprouts will become an even better company offering more value to the nearly 1.5 million customers who regularly shop at the combined company's stores," he said.

"This is a combination that makes great sense given the rapid growth in demand for natural and organic products and the complementary nature of the geography of the two companies. Apollo is excited to support Sprouts' dynamic management team and to help the company prepare for continued growth throughout the United States," the Apollo Global Management senior partner added.

Jhawer played a key role in doing the deal, which is part of Apollo's plans to dramatically grow Sprouts Farmers Market, which is began doing in earnest last year when it merged Henry's, which it owned through its Smart & Final grocery retailing company based in Southern California, into Sprouts, gaining majority ownership in Sprouts Farmers Market as part of the deal.

Stan and Shon Boney, who remain investors in Sprouts and are two of its founders, will continue to be Sprouts Farmers Market's two senior-level executives. Stan Boney is chairman. Shon Boney, Stan's son, is CEO.

Doug Sanders is responsible for the day-to-day operations of Sprouts as its president. He remains in that position. Chris Sherrell, president and CEO of Sunflower Farmers Market, is expected to join Sprouts Farmers Market in a senior capacity.

When I first reported on the negotiations between Sprouts and Sunflower on November 6, 2011, I said the the Sprouts'-Henry's deal was roll up number one in terms of what were the then three competing farmers market-style grocery chains in the western U.S. The deal to merge Sunflower Farmers Market, which became Sprouts' only remaining identical-format competitor after the Henry's deal a year ago, into Sprouts Farmers Market is roll up number two, as I called it in my November 6, 2011 column here.

That website is here. You can read the general announcement about the deal here. The press release statement distributed to the media today is here.

And, in case you're wondering, two of the founders of Sunflower Farmers Market, Libby Cook and Randy Clappnot, who are known only to those of us who work in the industry or who follow it very closely, were mentioned in the deal announcement today.

But that other co-founder, Michael Gilliland, the man who was the CEO and the public and media face of Sunflower Farmers Market from its founding in 2002 until early February 2011, when he resigned after being arrested February 10, 2011 and charged with one count of felony child prostitution as the result of a sting operation conducted by the Phoenix police department, was omitted, which is an omission one can hardly blame - or be surprised about - the board members and CEO's of Sprouts' and Sunflower from making.

Gilliland and Forman have filed motions for and received a series of continuances in his trial over the last year. In fact, the two appeared in the Maricopa County, Arizona Superior Court yesterday for a pre-trial conference, where he was granted a continuance. He was set to go to trial March 15. But it appears the trial has been postponed to April 12, as you can see here.

But considering from 2002, when Sunflower was founded, up until February 9, 2011, the day before his arrest, Michael Gilliland was that public face of Sunflower Farmers Market, it's a bit surreal, at least to those of us who work in the industry or who follow it very closely, to see no mention of him, for obvious reasons, in an announcement of this sort.

Perhaps there's an object lesson in it for the food retailing industry, which is: Avoid using an individual as the public face of your grocery chain or even of a major marketing campaign because the potential downside of doing so can be severely damaging, although in Sunflower Farmers Market's case its board and CEO Chris Sherrell have managed the situation well. Instead, let your stores be the face of the chain to the public.

I'll have more to say about the Sprouts-Sunflower deal in an upcoming column. But for now I'm going to bask in Fresh & Easy Buzz's scoop. Actually that's not true. Instead, I'm going to check in with a bunch of people at Expo West, so I can find out how the announcement is playing in those bars and restaurants tonight.

And although the focus at the mega-show is on healthy, natural and organic food and drink, those bars are always as packed as the show floor is. They're also the best place to pick up what might eventually become the makings of a good scoop. At least that's what I'm told.

Suggested Reading - Sprouts and Sunflower: The Art of the deal coverage

~The follow up: A deal is done - February 7, 2012: Deal Announcement From Grocers Sprouts and Sunflower Farmers Market on Tap

~Most Recent: Bringing the elements of the deal together - February 13, 2012: Sunflower Farmers Market, Sprouts and Private Equity: The Art of a Soon to Be Announced Deal

~Scoop de jour: Read past columns by 'The Insider', including those where he broke the news about the Sprouts-Henry's deal, here.

Great reporting on your part. Too bad none of the publications that have announced the merger have noted that this wonderful blog had the information far in advance, including the Arizona Republic, Los Angeles Times, Union-Tribune (who I guess wants us to beleive it's now just the U-T) and the Denver Post.

You are confusing the Temecula, CA Henry's locations with the two former Henry's and now Sprouts franchise owned and operated locations in Chula Vista, California.

You're correct re: Henry's S_C_R-S. It's been clarified in the piece.
Thanks.

I recall Sprouts saying it combined sales with Henry's would be around $1.2 billion. So if that's true, if you add in the new stores Sprouts has opened since then, it's probably $1.3 oe so. That's with 104stores as of today.

Will any Sprout's be opened in the California Central Valley?

Where else in the Central Valley would you like to see Sprouts open stores. Their people regularly read Fresh & Easy Buzz.