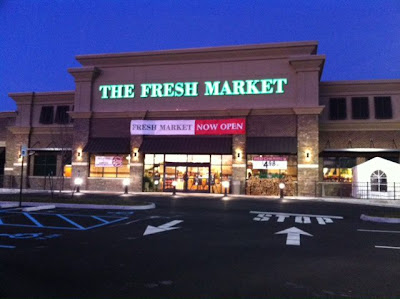 California here they come: The Fresh Market opened the store pictured above, at 421 North State of Franklin Road in Johnson City, Tennessee, on January 4, 2012. Yesterday the grocery chain opened a new store on the east coast, in Scarsdale, New York. Another new Fresh Market store opens next week, on January 25th, in Rockville, Maryland. Many more stores are set to open this year.

On August 3, 2011 we reported in this story: [Fast-Growing Specialty Grocer The Fresh Market Targeting Mid-2012 For First California Store] that North Carolina-based specialty grocery chain The Fresh Market planned to open its first store in California, most likely in Palo Alto in the north, in mid-2012.

Since we published our story in August 2011, the fast-growing 112-store grocery chain has been focusing on achieving just that goal. And while it might come a bit later in the year than mid-2012, The Fresh Market plans to open its first one or two stores in Northern California's San Francisco Bay Area and metro-Sacramento region before the year is out, according to our sources.

One of the first Fresh Market stores to open - in addition to the Palo Alto store we reported on in the story linked above - could be in a vacant approximately 25,000 square-foot Borders Books store at Rocky Ridge Drive and Douglas Boulevard in Roseville, near Sacramento, a city that's seen a spate of new grocery store openings over the last couple years, including units opened by other recent entrants to the region, like Sprouts Farmers Market and Sunflower Farmers Market, both of which have additional new stores set to open this year in the Sacramento region and elsewhere in Northern California.

Publicly-held The Fresh Market, which has been turning in solid comparable-store-sales growth and profits over the last couple years, is also looking for additional store locations in Sacramento and the metro region, including Elk Grove and Folsom, where Tesco's Fresh & Easy plans to open stores in March of this year, along with in the San Francisco Bay Area.

Fresh & Easy Neighborhood Market opened two new stores in Northern California's Bay Area last week, on January 11, giving it 18 units in the northern part of the state. The two stores are in Brentwood in the East Bay and Mountain View, which is in Silicon Valley, in the South Bay region.

As we reported on August 3, 2011 [Fast-Growing Specialty Grocer The Fresh Market Targeting Mid-2012 For First California Store], The Fresh Market has been in negotiations with the developer of the Edgewood Plaza shopping center in Palo Alto, California to locate a store in a vacant building at 2800 Channing Avenue in the center. Those negotiations continue, and progress is being made toward a deal, according to our sources, who tell us they expect a lease to be signed by the developer and The Fresh Market in the first quarter of this year. 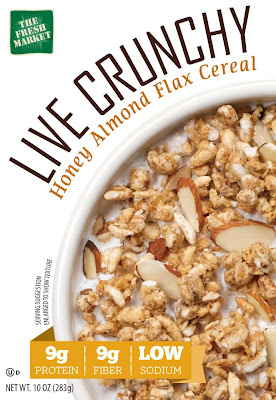 The Fresh Market is also looking to open a distribution facility in Northern California, according to our sources, particularly for distribution of its extensive fresh foods offerings, which include produce, fresh meats, deli and ready-to-eat and ready-to-heat fresh-prepared foods. The grocer likes to source locally and plans to take advantage of the fact that so much fresh produce and other fresh foods are grown and produced in Northern California.

Our sources tell us The Fresh Market - which isn't commenting on its specific plans in California at this point, although we expect an announcement about those plans from the grocery chain soon - wants to have its first couple stores open in Northern California by mid-to-late 2012, to be followed by additional store openings in 2013.

The fast-growing - it opened its newest store yesterday in Scarsdale, New York and one in Johnson City, Tennessee (pictured at top) January 4 - North Carolina-based specialty grocer is a serious player in its current markets, competing strongly against both Trader Joe's and Whole Foods Market, for example, in the fresh and specialty grocery niche.

The Fresh Market now plans to take its brand and style of food retailing (see our August 2011 story for details) to what is arguably the mecca of specialty grocery store competition, Northern California. And, based on what we've learned since August 2011, it plans to do so in a significant way - opening numerous stores in the Golden State over the next few years.

October 15, 2008: Tesco to Locate Fresh & Easy Store in Palo Alto, California; it's First in the City and SF Bay Area Store Number 22 By Our Reporting

That cereal looks delicious. I know. How can you tell from the box? I dunno. But if you can, I would buy that box if they had a Fresh Market in my area.

Any chance of getting pictures of the inside of the store?

Interesting on the local distribution center. Not going to make the same mistake as F&E supplying to the bay area from Riverside?