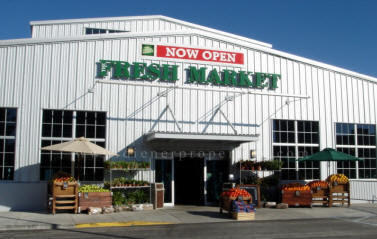 A Fresh Market store (above) in Miami, Florida and another (below) in Milwaukee, Wisconsin. 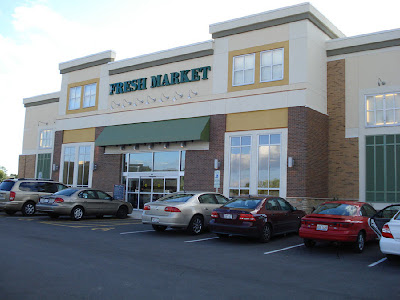 Fast-growing Greensboro, North Carolina-based specialty food and grocery chain The Fresh Market plans to become California's next new grocer, and is looking to open its first store in the Golden State as early as mid-2012, Fresh & Easy Buzz has learned.

In February of this year CEO Craig Carlock said in a conference call The Fresh Market is looking west to the Golden State for future expansion, saying then he didn't have any specifics in terms of a time-line for entering California or any other state west of the Rocky Mountains.

The publicly-held specialty grocer currently operates 102 stores in 21 states. Those stores are in the South, Mid- Atlantic, Midwest and Northeast regions. The Fresh Market is currently putting a major focus on accelerating its store expansion in the Midwest and Northeast, Carlock said in a presentation at the William Blair Growth Stock Conference on June 14 of this year.

Our sources tell us The Fresh Market is searching for numerous store locations in parts of Northern and Southern California that fit the specialty grocer's consumer demographic and lifestyle criteria.

That criteria includes: communities where residents tend to have a higher than average income; have attended college; place a higher than average emphasis on food quality and customer service; are less driven by price; put a premium on fresh and healthy foods; and do an above average amount of entertaining at home.

Among the regions The Fresh Market is searching most aggressively for store sites in is the San Francisco Bay Area in Northern California, particularly in cities and neighborhoods that skew high in the variables listed above.

For example, representatives of The Fresh Market are in negotiations with the developer of the Edgewood Plaza shopping center in Palo Alto, California to open what would be the North Carolina-based specialty grocer's first store in California, at 2800 Channing Avenue in the shopping center, which is being redeveloped by Sand Hill Property Company.

Interestingly, in 2008 the developer and Tesco's Fresh & Easy Neighborhood Market were close to signing a lease for the 2800 Channing location (a vacant building in the center), which would have made the grocer the shopping center's anchor store. But the deal ultimately fell through.

Palo Alto and Berkeley also have another thing in common: The Fresh Market has an interest in finding a store location in the East Bay Area college town, just like it is in Palo Alto, which is in the South Bay Area.

The North Carolina based specialty grocery chain is also looking for locations in other Bay Area cities that fit the criteria we described earlier in the story.

Some of those key cities include neighborhoods in Danville and Walnut Creek in the East Bay, parts of Marin County and Napa and Sonoma counties, elsewhere in the South Bay Area near Palo Alto, and in higher income cities on the San Francisco Peninsula, like Burlingame, as well as in San Francisco itself, according to our sources.

The Fresh Market is also looking for locations in the Sacramento metro region in Northern California, according to our commercial real estate sources.
﻿ 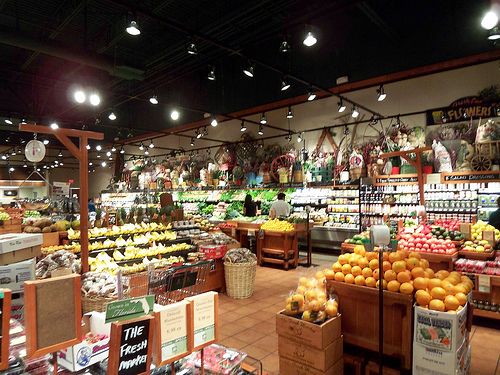 We're told The Fresh Market (take a look inside one of its stores above) is also looking for store locations in parts of Southern California, that meet the criteria we've described, for possible 2012 openings, although our sources say that at present the San Francisco Bay area and metro Sacramento region in the north are the number one priorities.

Among the areas in Southern California we're told The Fresh Market is looking for locations in include the higher income parts of Orange County, the western portion of Los Angeles and in and around San Diego.

The Fresh Market's focus and strategy

The fast-growing specialty grocery chain, which says it will open 12-14 new stores by the end of its 2011 fiscal year, focuses on offering premium products, with an emphasis on fresh foods and perishables, in its stores, which average about 21,000 square-feet.

In June CEO Carlock, who spent a number of years working for consumer products giant Proctor & Gamble, said the chain's sales of fresh and perishable foods represented 67% of total fiscal year 2010 sales, with the remaining 33% of sales coming from non-perishable or shelf-stable products.

The Fresh Market also puts a strong emphasis on customer service. For example, its meat and deli/prepared foods departments are fully-staffed by butchers and clerks. The meat and deli departments are full-service, featuring un-packaged meats which are wrapped by butchers and deli clerks after the desired items are selected by customers. The meats are cut in-store by the butchers.

The fresh-prepared foods offering is extensive, ranging from fully-prepared ready-to-eat and heat items like salads, sandwiches and entrees to complete dinners.

The Fresh Market also takes a neighborhood grocer approach. (Sound familiar?) Each of its stores are designed to fit into the neighborhood, particularly the exterior design (see the photos at top), and the grocer does a considerable amount of product-mix localization on a store-by-store basis. In these two ways The Fresh Market, which was founded as a single store in Greensboro, North Carolina in 1982,  is very much like Austin, Texas-based Whole Foods Market.

Ray Berry, who founded The Fresh Market 30-years ago, is its chairman. CEO Carlock has been with the chain for 12 years.

In addition to its mega-population and foodie-oriented demographics, part of the reason driving The Fresh Market to the Golden State is simply sheer growth - and the grocer's strategic plan for much more of it.

Since 2000, for example, The fresh Market has tripled its store-count.

Additionally, in June CEO Carlock said current plans call for developing The Fresh Market, which went public in November 2010, into a national specialty grocery chain of over 500 stores.

On June 2 The Fresh Market reported a 10% increase in overall sales for its 2011 fiscal year first quarter, which ended My 1, 2011, and a rise in comparable store sales of 4.1%, compared to the same period the previous fiscal year (2010).

For fiscal year 2011, The Fresh Market's CEO says the grocer aims to achieve the following:

>Open 12 to 14 new stores; many of which are expected to open late in fiscal 2011
Relocate two stores and remodel two others

>Spend about $85 million to $90 million in capital expenditures

>Increase comparable store sales by 4%-to-5%

The Golden State is likely to play a major part in The Fresh Market's long range growth, which its CEO says is forecast to be at least 15% annually for the next few years.

The San Francisco Bay Area's foodie culture, particularly in the more affluent and higher education-comprised locations we've described the grocer is targeting, offer a powerful lure for the specialty grocer as it watches how well Whole Foods Market and Trader Joe's are doing in the region, along with in Southern California.

Based on our current information, The Fresh Market plans to launch its first stores in the Bay Area in the north, followed later by opening stores in Southern California.

According to our sources, The Fresh Market likely won't likely announce anything about its specific plans in California until the end of this year or early 2012.
Posted by Fresh & Easy Buzz at 11:40 PM

So, if F&E decides it can't cut it in the US, do you think Fresh Market would take over the business and locations?

Tesco's Fresh & Easy stores are about half the square-footage (10K of The Fresh Market format's average size (about 21K sq. ft.). Therefore doubt if the latter would be interested in any of the former's locations, with perhaps a few rare exceptions, should the scenario you mention play out.

Are you familiar with The Fresh Market? If so what are your thoughts on it?

I'm a big Fresh Market fan. The prices are a bit lower than Whole Foods. Meat, produce and prepared foods excellent. We shop it and Publix about 50-50. Publix for basics and Fresh Market for the rest.