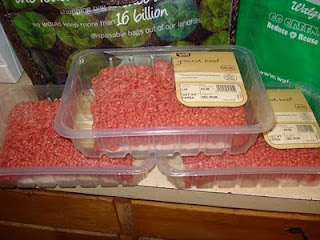 When the news many U.S. food and grocery retailers sell ground beef laced with the ammonia-treated filler "pink slime" (we've known about it for many years, as have many others with experience in the industry) hit the mass media like a ton of frozen ground chuck last week, we offered grocers some immediate advice via these two tweets on the Fresh & Easy Buzz Twitter feed, on March 17:


>Tweet One, March 17, 2012: #Grocers take note: If you don't sell #hamburger containing #pinkslime, tell the world. Why? It's now a point of competitive advantage.

>Tweet two, March 17, 2012: "The Corollary: if you're a #grocer selling #hamburger containing #pinkslime, drop it. Slime and #food are antithetical in consumers' minds.
Tesco's Fresh & Easy Neighborhood Market, which does not use "pink slime" in its hamburger, is doing just what we said grocers should do in the first tweet above on March 17, which is to tell the world - in Fresh & Easy's case consumers in California, Nevada and Arizona where it has its nearly 190 grocery stores - there's no "pink slime" being used as filler in the ground beef offered for sale in its stores.
And Tesco's Fresh & Easy is "telling the world" it doesn't and has never used "pink slime" in its ground beef in a smart and creative way.
On Wednesday, March 28, Fresh & Easy Neighborhood Market is holding a "Pink Slime Swap Meat" at all its stores. Consumers can bring up two two pounds of fresh or frozen ground beef from another retailer to any Fresh & Easy store and exchange it for a package of fresh&easy (80/20) ground beef at no cost.

As part of the promotion Fresh & Easy is also asking interested customers to use the hashtag #SwapMeat on their Twitter and Facebook sites on Wednesday as part of the "pink slime" ground meat swap out. (80/20 refers to the ratio of lean meat to fat in the ground beef.
According to Tim Mason, CEO of Fresh & Easy, the Tesco owned fresh food and grocery chain "grinds all of its own meat, using only fresh, never frozen beef."

Mason is also inviting customers who have questions about the "pink slime" issue, Fresh & Easy's meats, or any other and Fresh & Easy private brand products to e-mail him at tim@freshandeasy.com, saying in a statement issued just moments ago: "It’s understandable that people would lose confidence in food retailers because of the use of pink slime. Fresh & Easy has never been about shortcuts or fillers - just high-quality fresh food that we produce ourselves, so we know it’s the best."

All the meat sold in the Fresh & Easy stores is cut and ground at the retailer's food and distribution facility in Riverside County, California, where its also packaged. The fresh meats are then shipped to the stores in California, Nevada and Arizona. Unlike most other grocery stores and supermarkets, the Fresh & Easy markets don't have meat departments in-store.

In our March 17 tweet advisory to grocers that don't use "pink slime" in their ground beef, we said touting that fact offers a competitive advantage if done in a timely manner.

The reason this is so is because the "pink slime issue has already a major food safety - not to mention a gastronomical nightmare - with consumers. Like we said on March 17 in our second tweet to grocers that do use "pink slime" in their ground beef: "The Corollary: if you're a #grocer selling #hamburger containing #pinkslime, drop it. Slime and #food are antithetical in consumers' minds." The conflicting concepts are also hard to swallow when it comes to consumers' stomachs.

Most grocers that have been using pink slime are doing just that - stopping the practice and announcing it to the consuming public.

In our analysis Fresh & Easy's "Pink Slime Swap Meat" is a home run on numerous levels.

First, it's a creative yet a simple concept, which are the best kind to communicate to consumers.

Second, and most importantly, it takes advantage of the competitive advantage opportunity not using "pink slime" in ground beef offers grocers like Fresh & Easy, in terms of offering to exchange consumers "pink slime"-laced ground beef for a "pink slime"-free substitute - fresh&easy brand - at one of the grocery chain's stores.

The key potential short-term competitive advantage with this is that it might drive shoppers who've previously never stepped foot into the Fresh & Easy stores into the small-format grocery markets. There's also a branding opportunity for the grocer with its fresh&easy brand in the fresh meat category.

Fresh & Easy's "pink slime"-laced ground beef swap out on Wednesday should draw some attention to the grocery chain in general, and more significantly to the healthier food store position and brand Tesco has been and is attempting to stamp on its Fresh & Easy Neighborhood Market operation. This offers a potential competitive advantage element in the chain's long-term efforts to convince consumers that Fresh & Easy equals healthy, safe and tasty foods.

Free, as in bring in your pink slime ground beef, and get pink slime-free hamburger in return for no charge, is a powerful message and concept, as is the fact the trade out is as easy as meat pie.

Lastly, the creative "pink-slime"-laced ground beef for "pink slime"-free swap out concept has an element of fun to it, which combined with all of the above elements adds power to the event. It's also a good news hook which we are certain the mainstream media will pick up on.

One important caveat though to such promotions: Grocers must be very careful they operate a fully integrated "clean food" operation when they go this route. Why? Because if they don't, they could be caught in a pink slime situation of their own, and having challenged competitors previously with this type of promotion therefore would put them in an extremely vulnerable place should such a thing occur.

We give Tesco's Easy Neighborhood Market high marks across the board - creativity, practical application competitive advantage opportunity, ect., for its ground beef trade out event planned for Wednesday.

Most all grocers who've been using "pink slime" in the ground beef they offer for sale are dropping it. Many have already done so. In our analysis, the rest will do so in the days ahead. After all, what food retailer in its right mind wants to be know as the grocer with the "pink slime"-laced hamburger in its stores?

Therefore, we predict any competitive advantage from the "pink slime" issue will be rather short-lived. Most food retailers are acting rapidly to no longer stock ground beef laced with the garbage. Consumers will forgive, as long as those grocers guarantee their ground beef is now "slime free."

As a result, grocers like Fresh & Easy are wise to strike while the grill is hot because a couple months from now we doubt the topic of "pink slime" will be getting much attention.
Posted by Fresh & Easy Buzz at 7:33 PM

Huh??? News to me, and I'm a c/a at a NorCal fne. Actually, I don't think many fne store level employees know this or much more as hours are being slashed and you ARE not to stay beyond your scheduled shift. Doesn't matter if pallets of ambient and frozen sit. This company's starting to stumble, and people are leaving.

Starting to stumble? Cab, I worked at F&E's main office in El Segundo until 2010, when I baled. Most of the employees who started in 2007-2008 are gone too. It was a stumble from day one until I left. The friends I have still working there all have their resumes out to other retailers and manufacturers. The store employees always seemed more tolerant than us but now I hearing the same thing you are saying from people I know who work in the stores. The hours thing you mention really has them upset.

Off topic: Is there an easy way to find pictures of their products? I had a great lobster cheese pasta for 5.99 today and I wanted to show a friend a picture. Obviously, mine is all gone, but I cant find an example online. Im also curious if theres a way to see which stores carry it, I hadnt noticed it before.

Yeah. I personally have many years of retail experience. I can pretty much tell when something stinks(it's not the produce aisle). I'll be ok, but I think about the people who left TJ's or Safeway for the op to manage their own store. Well, maybe not. Most of these people are jerks. lol.

lulz.... walked in yesterday and was handed the memo. Was also told to consider this the daily "huddle". We actually did have some people come in to exchange.

Just because they dont use pinkslime doesnt mean they dont sell rotten meat! Many a time have I purchased a steak, ground beef, or chicken to arrive home and realize the meat was expired! At first I thought it was because of the staff at the location, so i switched stores, nope!! but now that i read the first comment from an actual store employee i know why the meat is expired and rotten! I will stick to Sprouts and Trader Joes.

We take almost all of the photos that appear in Fresh & Easy Buzz, particularly those showing product on the shelf in-store, displays, ect. The good stuff. Sometimes we use a photo taken by Tesco's Fresh & Easy or another source. When we do we always put a photo credit under the picture.

Other than doing a search on Google Images for a phto you desire, the only other suggestion I would have would be to contact Tesco's Fresh & Easy Neighborhood Market directly and ask them.

"Just because they dont use pinkslime doesnt mean they dont sell rotten meat! Many a time have I purchased a steak, ground beef, or chicken to arrive home and realize the meat was expired! At first I thought it was because of the staff at the location, so i switched stores, nope!! but now that i read the first comment from an actual store employee i know why the meat is expired and rotten! I will stick to Sprouts and Trader Joes."


It is personally embarassing when a customer comes to me with an expired product, or return. The night crew is responsible for pulling the next days "specials", however, when the night crew consists of two people plus a tl, not too much can be expected. Hey, I've been to some major supermarket players and found expired product. Check the dates before you buy.