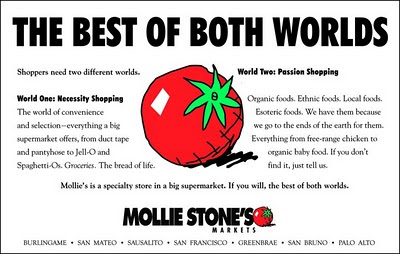 Mollie Stone's Markets' uses the slogan "The Best of Both Worlds" to describe its retail format and approach to food and grocery retailing, which is to offer basic necessities - what it calls necessity shopping - along with specialty, natural, organic and gourmet foods - passion shopping - under the same roof.

But the theme or slogan also aptly describes 2011 for the privately-held, nine-store San Francisco Bay Area grocer, in that so far this year Mollie Stone's has been passionately focusing on the necessity of continuous improvement in what today have become the two worlds of food retailing - a grocer's stores and its use of cyberspace and social media to communicate with shoppers.

Mollie Stone's Markets' year of passionate improvement takes another step tomorrow when the Mill Valley (Marin County), California-based food retailer launches its brand new website, which according to co-owner Dave Bennett will not only look good but will also be filled with added features, along with being a work of continuous improvement in and of itself.

The website is at: http://www.molliestones.com/. If the new website isn't working right away on Friday it's probably because it's being tweaked by the designers.

The launching of the new website tomorrow comes on the heels of Mollie Stone's hiring of its first social media manager, which we reported exclusively on in this July 14, 2011 story: Mollie Stone's Markets' Takes Next Step in its Social Media Journey By Hiring First In-House Manager.

As we noted in the story, Mollie Stone's Markets' has been growing its use of social media significantly. As part of that growth the new website will over time integrate the grocer's social media sites with features on the website, according to Elizabeth Milks, the retailer's social media project manager.

Speaking of integration, Mollie Stone's isn't letting its passion for cyberspace and social media take its focus off the nuts and bolts of food retailing - its stores.

In fact the opposite is true. Since January of this year the retailer has been waist-deep in various store remodeling projects as well as acquiring its ninth store in late January in San Francisco's Castro District and opening it less than two months later, on March 9.

Along with opening the new store in San Francisco's Castro District, which is Mollie Stone's third store in the city, the grocer has remodeled the produce, bakery and deli departments in its Burlingame, California supermarket, a project it started in January and completed in April. (You can see a photo here.) 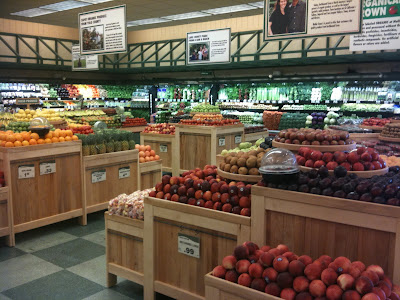 Additionally, Mollie Stone's has just completed the remodeling of the produce department (pictured above) in its Sausalito, California store, along with doing major resets of the in-store bakery and cheese shop.

As part of the produce department remodeling project, the store's manager and the Mollie Stone's team heading it up decided to extend the fresh fruit and vegetable-filled department outside, adding the merchandising feature pictured below in front of the store.

The concept fits the outside of the store well because Sausalito, which is just over the Golden Gate Bridge from San Francisco, is a European-style village community located on the water and its residents are very healthy food and foodie-oriented. The fresh produce outside therefore makes a very locally relevant message, as well as lending itself to impulse purchases and thus added sales for the store, which is exactly what happened last week as the fresh fruits featured in the tropical-themed display below were selling briskly. 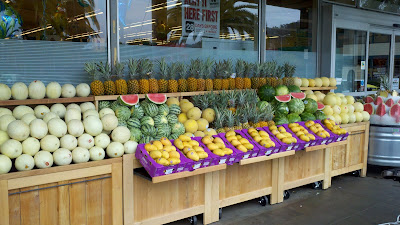 Next up for Mollie Stone's Markets, which is co-owned by Mike Stone and Dave Bennett who founded the chain together in 1985, is a remodeling of the deli-prepared foods department in its Greenbrae (Marin County) supermarket. The store's produce department was remodeled in December 2010.

Stone and Bennett have also channeled some of their passion for the grocery business and specialty foods into a new brand of products called "Mike & Dave's." The first product under the eponymous brand, Mike & Dave's Wing Sauce, was launched in May of this year (see our stories linked at the end of this piece). Additional "Mike & Dave's" products are in development, Bennett tells Fresh & Easy Buzz.

Back in cyberspace, Mollie Stone's has launched a new "Secret Sales" promotion on its Facebook site. The promotion works this way: Each Tuesday the grocer posts a deal item along with a promotional code which allows shoppers to get the product at the special Facebook-only price. Customers note the promotional code number and give it to the checker at a Mollie Stone's store in order to get the "secret sale" item at the special price.

The promotion, although brand new has, based on our observation and research, been driving shoppers to the Facebook site and in-turn is driving users of the site into the stores for the deals, depending of course on the specific product and how good the deal is.

Social media project manager Milks' tells us it's the first of what will be many social media site-based promotions Mollie Stone's Markets will be doing in the coming months.

In addition to Facebook, Mollie Stone's has a very active Twitter feed, and also uses the location-based site Foursquare. It also has a YouTube channel where it posts videos.

The launching of the brand new website on Friday will tie-in Mollie Stone's Market's eight month year of passionate improvement - and neither are over yet - in a solid way in our analysis because it will be a bigger and better central place online where the grocer can showcase all it's been doing to improve its stores (and open a new one), along with its growing social media efforts, allowing it to better communicate to shoppers its focus on both the necessities and passions of food and grocery retailing in the San Francisco Bay Area.

Mollie Stone's Year of Passionate Improvement: Follow the Story Below