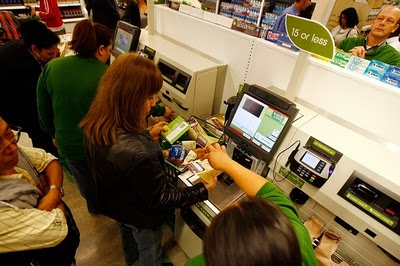 The California State Senate Appropriations Committee passed Assembly Bill 183 (AB 183), which if passed by both houses of the state legislature and signed by Governor Jerry Brown will ban sales of alcoholic beverages at self-service checkout stands in retail stores in the Golden State, by a six-to-one majority last week.

The bill's passage in the Appropriations Committee is the legislation's last formal committee stop. The next step for AB 183 is for it to get what's called a "third reading," which has been scheduled for August 22.

In the "third reading" next week, AB 183 will be read on the Senate floor, then debated by members. Following the debate, a roll call vote is set to be taken.

Based on our ongoing reporting, we expect the bill to pass in the California State Senate, as we've noted previously in our coverage.

If as we expect it to AB 183 is passed following debate next week or later, it will then be sent back to the California State Assembly where the legislation authored by Assemblywoman Fiona Ma (Democrat-San Francisco) originated. The reason for this is because the bill was amended in the Senate (on June 22). Therefore under California Legislative rules AB 183 must be returned to the Assembly for a vote of "concurrence" on the amendment made by the California State Senate because the Assembly is the legislative body of origin.

AB 183 passed the full Assembly by a wide margin, as we've previously reported.

If the Assembly votes to agree on the Senate Amendment to AB 183, the bill will then be returned to the California State Senate for an up or down vote by members.

The amendment (here) in the Senate doesn't change the thrust of AB 183, which is to require a face-to-face clerk-to-customer transaction (hence full-service checkout) whenever alcoholic beverages are purchased. Therefore, based on our reporting we expect the Assembly to agree to the amendment or work out a compromise with the Senate.

We also expect this to be done soon because the legislative session is coming to a close soon.

If the bill passes, which in our analysis it will, it then goes to Governor Jerry Brown, who will decide whether to sign it into law or use his veto pen.

In a recent story on AB 183 we offered odds, saying in our analysis it's a 70% chance Governor Brown, who's a Democrat, will sign AB 183, compared to a 30% chance he will veto the bill if it passes in the Senate and is sent to his desk for action.

Based on reporting and research since then, we are decreasing our odds slightly - from the 70% probability Brown will sign it, to 60% that he will.

The way it looks to us today - and things could change either way in the coming days - AB 183 will pass in the California State Senate and the Governor will sign the bill into law.

We asked the Governor's office this week if Brown planned on signing AB 183. A spokesperson told us the Governor has not made that decision yet, which is what we expected to hear since among other things AB 183 has yet to pass both legislative houses.

We do know though that opponents of the self-service checkout booze sales ban bill have at least to a limited degree had the ear of the Governor on the matter, the primary focus of their message and arguments being that it's anti-business  legislation coming at a time when California, which has the second-highest unemployment rate in the nation, is suffering economically.

Additionally, those oppossed to AB 183 becoming law in the Golden State are also reminding the Governor that food and grocery retailers, particularly chains including Tesco's Fresh & Easy Neighborhood Market, are one of the few industries at present creating  new jobs in California.

Although the California Grocer's Association is lobbying against AB 183, the only retailer-member of the trade organization which stands to be affected in a major way if AB 183 becomes law in the Golden State is Fresh & Easy Neighborhood Market, which offers self-service checkout only in its 127 stores in California. There are 176 Fresh & Easy markets. In addition to the 127 units in California, Tesco has 28 Fresh & Easy stores in metro Phoenix, Arizona and 21 units in metro Las Vegas, Nevada.

As such, all that would happen for these grocers is that customers would no longer be able to purchase alcoholic beverages using the self-checkout lanes in the stores. Instead they would have to go to the full-service lanes for those purchases.

Self-service checkouts like those used at Fresh & Easy Neighborhood Market lock-up whenever a customer scans a package, bottle or can of alcohol. When this happens the assistance of a store clerk is required in order for the transaction to be completed. The clerk generally asks the customer for their identification card (it's the same process as at full-service checkouts in that if a person looks younger than 30-years-old or so they are asked for identification). Once the customers legal age is verified, the store worker then punches in a code on the register and the customer is cleared to complete self-checking their purchases.

Based on the language in AB 183, at least from our reading and those of the Legislative Analyst's Office, this isn't a sufficient face-to-face interaction to allow the purchase of alcohol at the self-service checkouts. Instead the bill requires all transactions involving the sale of wine, beer and spirits in retail stores to be conducted at a full-service checkout, similar to existing California law for the sales of tobacco products and certain other items like glue, spray paint and a couple types of over-the-counter medications.

The two previous bills, AB 523 in 2008 and AB 1060 last year, failed to become law. But AB 183 at present is on the road to passage in the California State Senate, in our analysis. From there it will be up to Governor Brown, a Democrat, to make it law or to veto the bill, like Republican Governor Arnold Schwarzenegger did in 2010.

We will know soon because if AB 183 passes and is sent to Governor Brown he will have until the end of September to make the "Son of Tesco Fresh & Easy" law a reality or veto it. It's a 60% probability today the Governor will sign it if it passes in the senate. But Brown is known to go against type and odds. Therefore, our our probability analysis that he will sign AB 183 could change between today and the end of September. Stay tuned.

Follow the story at the links below - Legislation to ban sales of alcoholic beverages at self-service checkout stands in California retail stores: 2008-to-today