The British Are Coming ... to Target: Chicago CityTarget to Include Pret A Manger Fresh-Prepared Foods Shop; Los Angeles, San Francisco and Seattle Likely

Fresh-prepared foods merchandising and retailing continues to get more interesting - and increasingly competitive - in the United States.

Today discount retailing giant Target Corp. announced it has inked a deal with the London, UK-based fresh-prepared foods retailer Pret A Manger to put one of its Pret shops in what will be one of Target's first four smaller-format (60,000-100,000 square-feet,) urban CityTarget stores - the store at the Sullivan Center in Chicago's Loop, which is set to open in July 2012. The Chicago CityTarget store will be about 100,000 square-feet.

Pret A Manger, which means "ready-to-eat" and has free-standing shops in New York City, Washington D.C. and Chicago in the U.S., along with in the UK and Hong Kong, prepares a variety of ready-to-eat  fresh foods daily in-store. Its offerings include sandwiches, salads, soups, sushi, meals, snacks, desserts and more. (See the menu here.) 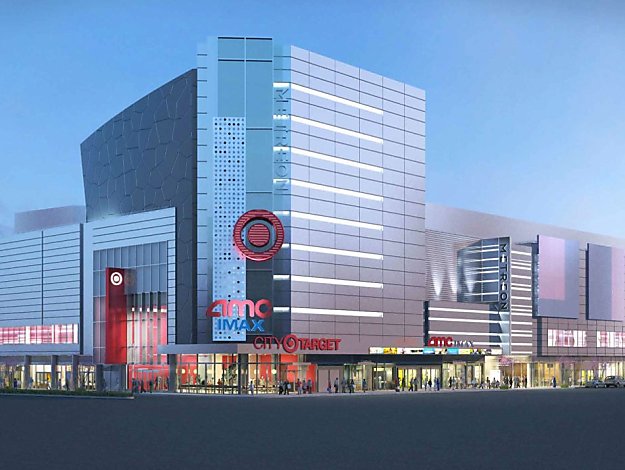 San Francisco's Metreon Center, shown in the rendering above, is being completely remodeled to house the CityTarget store, which will take up the entire second floor of the center. The store, which will be about 100,000 square-feet, is set to open in mid-2012. The location is an excellent one geographically and demographically for a Pret A Manger shop. [Artist's rendering: Westfield Group.]

The other three CityTarget units, all on the west coast in downtown Los Angeles, San Francisco (in the Metreon Center in the South of Market District) and Seattle, are also set to open next year as well.

As we reported last year, Target also says it plans future CityTarget stores (10 total to start including the four above) in New York City, Boston, Miami, and Baltimore. [See - September 24, 2010: Target to Have 'P-fresh' Fresh Food & Grocery Markets in 850 Stores By 2011 End; First Smaller Urban Store Set For Seattle in 2012.]

All of the CityTarget stores will feature Target's "P-Fresh" food and grocery stores inside, which include an assortment of fresh produce, meats, perishables, frozen foods and packaged groceries.

"We believe Pret A Manger will help us provide guests in downtown Chicago with the exceptional, complete shopping experience they have come to expect from Target," Annette Miller, the retailer's senior vice president-grocery, said in making the announcement today. "Our Chicago CityTarget guests can pop in for a fresh sandwich or salad during their regular visits to our store for groceries or apartment essentials."
Target's announcement today about its partnership with the privately-held British fresh-prepared foods chain, which burger giant McDonald's once owned about a third of, was exclusive to the Chicago CityTarget store.

"We have no other plans in place today for adding Pret A Manger to other CityTarget stores, but we're excited for the potential for that over time," Miller said. "Pret A Manger doesn't have a presence on the West Coast today. That is one reason the partnership is just in the Chicago store."

However, earlier this year a good source told us Pret A Manger is looking to the West Coast, specifically San Francisco, Seattle and Los Angeles, three big cities with strong demographics that fit the retailer well (think demographics similar to those of Starbucks and Whole Foods Market) for its next strategic move.

The UK-based fresh-prepared foods retailer started out in the U.S. in 2000 in New York City, followed by launching in Washington D.C. (in 2009) and most recently (last year) in Chicago. There are currently 250 shops globally. Sales last year were about $530 million, according to Pret A Manager.

Therefore, based on the information we have, we expect to see what will be the store-within-a-store shops - the Pret A Manger in the Sullivan Center-Chicago CityTarget store will be about 2,500 square-feet - in the San Francisco, Los Angeles and Seattle CityTarget stores, if not right away when the units open next year, fairly soon after.

Soups, salads, sandwiches and drinks from Pret A Manger.

In our analysis the move is a smart one for both Target and Pret A Manager. It also could open the door for Target to add the fresh-prepared foods' shops in some of its Target discount stores where it's been adding the "P-Fresh" fresh food and grocery markets in west coast regions and neighborhoods that make sense, such as in parts of the San Francisco Bay Area, Southern California and metro and suburban Seattle, Washington.

Target is also opening a second store in San Francisco next year. That store will not be a CityTarget but instead an about 120,000 square-foot discount store. It will include a "P-Fresh" market inside. The location, in a small shopping center near the private, Jesuit-run University of San Francisco, has good demographics to support a Pret A Manger shop as well. The two stores will be Target's first in San Francisco.

Target has Starbucks units inside many of its stores. So in terms of demographics, one can look at the top-performing in-store Starbucks cafes and begin to get a good idea of which Target discount store locations might do well with Pret A Manger shops inside, should the partnership between the two retailers blossom beyond CityTarget.

Pret A Manger's prepared foods offerings fit well with the profile of the Target shopper, which is majority female, higher income as compared to Walmart shoppers, for example, and more upscale-oriented while still searching for value.

Therefore in our analysis this partnership has the potential to grow significantly. It gives target a high-quality and extensive fresh-prepared foods offering in its stores to go along with its "P-Fresh" markets while giving Pret A Manger a way to expand into new markets without having to acquire its own standalone shops, which can be an expensive proposition in places like San Francisco and Seattle.

This is a development worth watching closely, particularly since Target is adding "P-Fresh" units to hundreds of its about 1,762 U.S. discount stores (located in 49 states) each year.

Already, about half the units have the grocery markets inside. Over the next three years Target says it plans to have the fresh food and grocery offerings in up to 75% of its discount stores.

Having a fresh-prepared foods offering as a companion to "P-Fresh" in many of those stores has the potential to be a powerful one-two punch for Target, along with turning up the heat when it comes to fresh-prepared foods merchandising and retailing in the respective markets where it might add the Pret A Manger shops.

As a result, based on what we've learned from our sources, combined with what we learned earlier this year about Pret A Manger and its expansion desires and future plans, it's our analysis Target and Pret A Manger, although they plan to take the new partnership at a slow but steady pace, are already thinking far beyond the single store in Chicago, starting with the three CityTarget stores opening in Los Angeles, San Francisco and Seattle next year, and if all goes well looking far beyond that.

We could be seeing the makings of a very interesting Anglo-American food retailing partnership featuring London-based Pret A Manger ready-to-eat fresh food shops located inside selected Target stores. The debut will come in July of next year when the first one opens in the new smaller-format urban CityTarget store in Chicago.