Mill Valley, California-based Mollie Stone's Markets, which is majority-owned by partners Mike Stone and Dave Bennett who founded the local chain in 1985, offers a number of private brands in its nine supermarkets in the San Francisco Bay Area, including a selection of items under its own three brand names - "Mollie Stone's," "Mollie O Organic" and "Nonna Luisa" - which is something that's not all that common for a chain its size to do.

The privately-held, upscale-oriented grocer is a member of the Unified Grocers retailer-owned cooperative and offers its two major private brands - "Western Family" (mainstream food, grocery, perishable, frozen and general merchandise items) and "Natural Selections," the wholesaler's natural and organic products brand - in its nine stores, the newest unit being the store in San Francisco's Castro District, opened on March 9.

Unified, which is the largest retailer-owned wholesale grocer in the Western United States based on annual sales volume ($3.921 billion in 2010), is headquartered in Southern California. It has a Northern California distribution  center in Stockton, in the Northern Central Valley, and a buying-merchandising office in the East Bay Area city of Livermore.

But the focus of this story isn't on the grocer's existing three private brands or the store brands from Unified Grocers it merchandises in its stores.

Instead it's a product branding story of a more personal nature, involving Mollie Stone's Markets' and its owner-partners, Stone and Bennett - Mike and Dave, the "Wingmen."

In fact, if we had a special feature called "Personal Brand Showcase" that's where we'd prefer to put this story. But, and we know our readers will understand, we aren't going to create such a feature because there aren't many stories like this we could put in it.

Stone and Bennett, both veteran grocers in Northern California's San Francisco Bay Area, have created and are preparing to launch in their stores not a new private brand but what we're calling a "personal brand," as a way to distinguish between the two, although there are more similarities between a private brand and "personal brand" (in our usage) than there are differences.

The grocer-partners have created a brand named after their first names and are launching their first item in the nine Mollie Stone's stores this week. The brand name: "Mike & Dave's." The product: "Mike and Dave's Wing Sauce," pictured below. 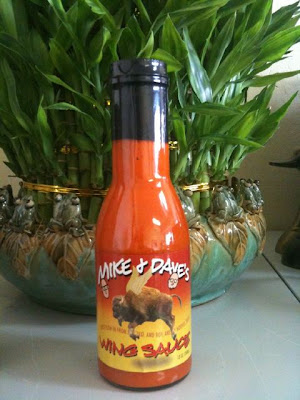 When we saw the new item (and brand) the name resonated well in our always brand-evaluating minds for a couple reasons.

First, sometimes the best brand names for products come, instead of from long brain-storming sessions and multiple focus group trials, from the simple and familiar - who we are, what we know and the like.

For example, Henry Ford used his last name for his auto company. Familiar. And simple.

The founders of Apple named the company after a common fruit. Simple and familiar enough; though very "out of the apple box" for what was then a revolutionary product - the personal computer.

The football team in Dallas, Texas is, what else - the Cowboys. Could it really be named after anything that's more familiar (and some might say simple) to a Texan than a cowboy?

And two guys in Vermont named Ben & Jerry decided to call their start up company and ice cream brand Ben & Jerry's. The rest, when it comes to the equity and success of the Ben & Jerry's brand today, as they say - is history.

For Stone and Bennett - Mike and Dave - who've been working together in the grocery business for decades, nothing could be more familiar to the partners than each other - and their respective first names.

Imagine, for example, how many times they've used each others first names - face-to-face (or across the way) in the office, over the phone and in e-mails?

The brand name "Mike & Dave's" also fits the product - a wing (as in chicken) sauce - in two key ways: Chicken wings, which absolutely must have plenty of sauce on them, are a personal food, eaten with our hands and usually with family and friends, or strangers who will soon become friends, while watching sports on TV or at parties, picnics and the like.

Secondly, A good business partnership requires the partners to work as a team, something Stone and Bennett are noted for, often acting as each others "wing man" when needed, meaning both understand that in order to stay in business together and maintain and grow a successful grocery chain, neither of them can always be the top banana or spread his wings too much or too often without giving the other a chance to do the same.

Instead, and this is true with the "wing men"-partners, each focuses on his key strengths - and let's the other shine at his. That's what a good "wing man" does in the grocery business.

Dave Bennett's main strengths and key areas of focus are marketing, buying and merchandising - including knowing as much about the kosher foods' category as any grocer in America. Mike Stone focuses primarily on operations, finance and new store development.

As a result of this relationship and partnership "Mike & Dave's Wing Sauce" not only is a "personal brand" in that the name is taken from the two men's first names, it also obtains brand credibility (and offers a fairly decent pun) from what we call the "wing man factor," as described above.

Stone and Bennett - the "Wingmen" - are launching their "Mike & Dave's Wing Sauce" in their nine Mollie Stone' grocery markets, where they will offer it exclusively for now.

Mollie Stone's Markets sells a lot of groceries - particularly specialty food-oriented products - in its nine Bay Area stores. The chain's creative merchandisers love coming up with and implementing cross-merchandising-style displays in the stores.

Therefore, although neither Stone or Bennett - Mike or Dave - or any of their "wing men" on the merchandising team or in the stores have told us this, we're going to spread our predictive wings a bit and offer this: If you happen to be near a Mollie Stone's market (store list here) in the very near future don't be surprised if you see "Mike & Dave's Wing Sauce" not only on the store's shelves but also displayed in one or more locations in the store.

We will offer four potential display opportunities for you to look for if you do happen to visit one of the stores:

>on a thematic end-cap, cross-merchandised with other compatible items;

>in the meat department, displayed near the fresh chicken wings;

>in the deli department;

>and displayed in the produce department, cross-merchandised with ranch dressing, celery, baby carrots and other fresh veggies regularly served with dipping sauces and eaten with sauce-coated chicken wings.

After all, once the store managers and department heads at the nine Mollie Stone's stores learn about the new wing sauce created by and named after their bosses, being the creative merchandisers they are, they're going to want to feature Mike and Dave's "personal brand" in places in the stores where the product is sure to get noticed - and purchased - by customers because ... that's what good wing men and women do in the grocery business.

Do you know if the "Wingmen" are interested in getting distibution for their sauce on the east coast.