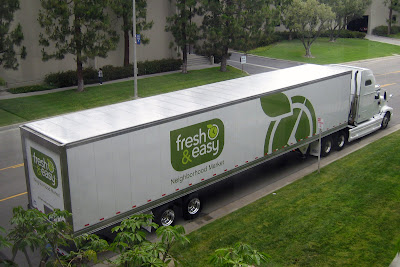 The Tesco-owned chain has inked a deal with Ryder System, Inc., its transportation, logistics and supply chain partner, to lease 25 compressed natural gas (CNG) delivery trucks, which it will add to its fleet of diesel fuel-powered vehicles and use to deliver fresh foods and groceries to its 176 stores in California, Nevada and Arizona from its Southern California distribution center. Fresh & Easy currently leases 71 vehicles from Ryder Systems, which it uses to deliver product to its stores in the three Western States.

Fresh & Easy Neighborhood Market has taken delivery of the first 15 of the CNG delivery vehicles, according to Cindy Hass, a spokesperson for Ryder Systems. The remaining 10 delivery trucks will be delivered to the grocery chain in October, she says. The CNG vehicles are the fist of their kind for Fresh & Easy's delivery truck fleet.

Tesco's Fresh & Easy is what Ryder Service, Inc. calls one a "Dedicated Contract Carriage" customer, which means the company provides a full menu of transportation, logistics and supply chain services to the grocer.

Those services include: providing the delivery vehicles and related equipment on a lease basis, along with engineering and logistics support services; supplying the drivers and management expertise. In other words, it's a full outsourcing-type arrangement between Fresh & Easy Neighborhood Market and Ryder.

Ryder Systems is making the compressed natural gas vehicles available to Tesco's Fresh & Easy as part of an agreement to reduce emissions the transportation company has made with the San Bernardino Associated Governments (SANBAG) in Southern California. San Bernardino County neighbors Riverside County, where the grocery chain's distribution center is located.

The agreement between the transportation company and SANBAG is part of a $38.7 million public/private partnership between the U.S. Department of Energy, the California Energy Commission, the Southern California Association of Governments Clean Cities Coalition, and Ryder System, Inc.

The key elements of the project include putting 202 of the CNG-powered delivery vehicles on the road in Southern California, making upgrades to three maintenance facilities for the servicing of natural gas vehicles, and the construction of two compressed natural gas fueling stations in the region.

Compressed natural gas is about 40% cheaper than diesel fuel, base on today's price. Additionally, experts estimate the CNG-fueled delivery vehicles produce in the neighborhood of 25% less emissions than diesel fuel does.

Geologist, entrepreneur and oilman T. Boone Pickens has for the last couple of years been advocating a nationwide government/private sector partnership that would have as its focus the conversion of the nation's entire diesel fuel-powered commercial trucking fleet to compressed natural gas, arguing doing so would be cheaper, reduce carbon emissions, help lower U.S. dependence on foreign oil and create jobs. According to Geologists, the U.S. and Canada have the greatest amount of natural gas reserves in the world.

Pickens has spent over a million dollars of his own money on a pubic relations program and lobbying Congress and the President to enact legislation designed too enable the massive conversion of the U.S. trucking fleet from diesel fuel to natural gas but has yet to see his "Pickens' Plan" become public policy.

United Kingdom-based Tesco, which owns Fresh & Easy Neighborhood has a major climate change/carbon reduction initiative that was started a few year ago by former CEO Terry Leahy, who retired in March of this year, and is being continued by the board of directors and new CEO Philip Clarke, who took over for Leahy in March.

Tim Mason, the CEO of Fresh & Easy, was named to the additional position of Tesco group deputy CEO in March. In that position, which reports to Clarke, Mason has overall responsibility for Tesco's global climate change/carbon reduction initiative, along with heading up Tesco's global marketing and branding efforts, as well assisting Clarke in a number of other initiatives.

"We are committed to reducing our impact on the environment, and incorporating natural gas vehicles into our fleet is a natural step to help us reduce emissions even further," Mason says. "Ryder has been an excellent partner in this effort, supporting our efforts to save our customers money and to be a good neighbor."

The reduction in  fuel costs should also provide some needed cost savings for Fresh & Easy Neighborhood Market as long as the cost of compressed natural gas remains significantly lower than diesel fuel.

"When we can reduce our operating costs through more efficient transportation technologies like natural gas, we can pass those savings on to our customers," Mason says. "This natural gas vehicle initiative directly supports our efforts to offer fresh, wholesome food at affordable prices."

The addition of the 25 CNG delivery vehicles to its fleet should provide a significant contribution by Tesco's U.S. Fresh & Easy chain towards the global retailer's goal and strategy of reducing its carbon footprint over the coming years in the 14 countries where it has its operations, stores, distribution facilities and delivery fleets, because of the reduced emissions the natural gas-fueled delivery trucks provide.

Since it opened its first stores in November 2007, Tesco's Fresh & Easy has been making making continuous improvement towards its goal of becoming a "green" (as in more sustainable) grocer.

In fact, the retailer's sustainable initiative started before opening the stores. For example, when Tesco constructed the 800,000-plus square-foot Fresh & Easy Neighborhood Market distribution center in Riverside County it included a massive solar energy array on the building's roof. In the peak summer months, like now, the system provides up to 30% of the facilities energy.

Fresh & Easy's most recent "green" initiative at store-level is the replacement of the coffin-style reach in frozen food display cases n the stores with upright units that have glass doors, which is something we were the first publication to report in this story: The grocer is currently in the process of replacing the coffin case freezer cases with the upright units with glass doors in about a third of its 176 stores.

>Uses LED lighting in its outdoor signs an in its frozen and refrigerated product display cases inside the stores;

>Recycles the display packaging it ships to its stores, returning it back to the distribution center in Riverside County;

(However, unlike most grocers Fresh & Easy does pre-package most of its fresh produce, thereby creating added packaging that's sent home with customers who purchase the items. The grocer also offers free single-use plastic carrier bags only rather than a choice of paper or plastic like most if not all of its competitors do. If Fresh & Easy offered its customers a choice it would be more sustainable because single-use plastic bags are recycled at far-lower rates then paper grocery sacks are, although the grocer does a good job at encouraging the use of reusable shopping bags in its stores.)

>Has recycling bins in all its stores for single-use plastic carrier bags and other types of recyclable packaging. This is the law in California, where the grocer has 127 of its 176 stores. But is not required in Arizona, where Fresh & Easy has 27 units, or Nevada, where there are 21 stores. However, Fresh & Easy neighborhood Market has the bins in its stores in those states anyway;

Your Outside the Box article states:
Additionally, experts estimate the CNG-fueled delivery vehicles produce in the neighborhood of 25% less emissions than diesel fuel does.

What calculation is this claim based on? And what emissions are the experts referring to? I believe that the natgas trucks produce greater NOx emissions than clean diesel and are only a trace amount below on Particulate Matter 2.5 emissions of dieles. New Clean Diesel Technology combined with ULSD emit virtually the same amount of emissions as natural gas trucks. I would like to see the studies used to back this claim.

You've got to be kidding me: $38.7 million--This is just a drop in the bucket! American Governmental Agencies are spending HUNDREDS OF MILLIONS of our hard earned tax dollars to engineer the GREENWASHING of the American people who are paying the tab with their tax dollars. This is laughable. I would not spend my money in a store where they are green washing their own customers. No wonder California is bankrupt.

The agreement between the transportation company and SANBAG is part of a $38.7 million public/private partnership between the U.S. Department of Energy, the California Energy Commission, the Southern California Association of Governments Clean Cities
Coalition, and Ryder System, Inc.

Anonymous: Our information on the percentage comes from published materials available from the U.S. Environmental Protection Agency, U.S. Department of energy and other non-governmental sources.

However, when it comes to this topic, we recognize there's a lot of politics involved. Therefore, feel free to post links to any empirical research studies you have that show diesel fuel produces fewer tailpipe emmissions than natural gas does.

Actually I think CNG is cleaner and cheaper than you claim. What a great idea that is good for the environment and the bottom line. I have additional questions about the CNG tractors. Is there someone at Fresh and Easy I could contact?