Fresh & Easy Looking Into Accepting Mobile, Digital Manufacturers' Cents-Off Coupons; But the Jury is Still Out 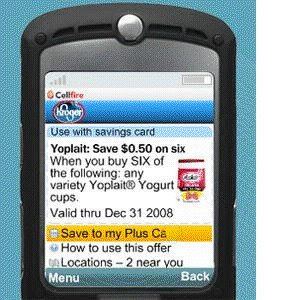 Tesco's Fresh & Easy Neighborhood Market is looking at potentially adopting a program which would allow its stores to accept digital, paperless manufacturer's cents-off coupons, using either its own mobile phone-enabled application, or more likely by partnering with one of the existing mobile, digital couponing companies, such as Cellfire, Shortcuts or another, Fresh & Easy Buzz has learned.

As we've written about extensively, Fresh & Easy doesn't accept manufacturers' coupons - either the traditional paper or the newer mobile, digital versions - at its 147 fresh food and grocery stores in California, Nevada and Arizona.

Instead, Fresh & Easy regularly distributes its own store coupons - both via its Web site and in direct-mail flyers - in versions like $5-off purchases of $20, $6-off $30 or more and $10-off $50 or more. The store coupons are paper, either already in that form, or downloaded from the web by consumers and then printed out.

Based on the information we have, Fresh & Easy Neighborhood Market has not yet decided to go forward with a mobile, digital couponing program, but is looking into the possibility of doing so for its stores.

The easiest way for Fresh & Easy to get into the mobile, digital couponing game, something many of its competitors such as Kroger Co. and Safeway Stores, Inc. already are doing, would be to partner with a third-party company like Cellfire or one of the others.

Such companies already have the technology available to enable grocers like Fresh & Easy to adopt a program without much upfront development cost.

These companies also have relationships with the packaged goods manufacturers and marketers that issue the coupons. The total system is in place in a package for retailers.

For example, Kroger Co. which operates the Ralphs and Food-4-Less chains in Southern California; Fry's in Arizona; and Smith's Food & Drug in Nevada, partners with Cellfire for its mobile couponing system. Cellfire's system offers both traditional coupons that can be obtained via the internet and then printed out, and digital coupons available on cell and smart phones.

And Safeway operates the Vons chain in Southern California, Central California and Southern Nevada; and under its Safeway banner in Arizona.

The way this works is that a shopper merely shows the checkout clerk the various digital coupons he or she has on their mobile phone during the checkout process. The clerk then deducts the digital coupon discounts from the customer's order on the store's POS system, just as they do with a paper coupon.

This presents a problem however for Fresh & Easy, since it's stores have self-service checkout only. As such, store clerks would have to assist shoppers whenever they have digital coupons on their mobile phones to be deducted from their respective grocery purchase orders. This could be so frequent it might turn self-service checkout into full-service, which is something Fresh & Easy's senior management doesn't want to do.

Therefore, since Fresh & Easy doesn't currently have a loyalty card program, it would have to use this second alternative (the human checkout clerk) in order to be able to use the existing third-party mobile, digital couponing systems, based on the current technology available.

Barring bringing on a loyalty card program, or having store clerks assist each customer who has mobile coupons on their mobile device to be deducted, Tesco's Fresh & Easy either would have to create its own mobile, digital coupon application, or in partnership with an existing third-party mobile couponing company, figure out a way to get around these two limiting factors.

Fresh & Easy's CEO, Tim Mason, was in the past the IT marketing manager for Tesco in the United Kingdom. It was under Mason in 1996 that Tesco launched its first online grocery Web site, which was developed by Nick Lansley, a programmer and analyst in the company's IT department at the time.

Today, Lansley is Tesco's resident IT guru. He would be the go-to-guy we would look at to solve the mobile, digital couponing dilemma for Fresh & Easy described above.

One of the key reasons Fresh & Easy is looking into a mobile, digital couponing program is because its received numerous complaints about not accepting paper manufacturers' cents off coupons over the last two-plus years its been in business.

Additionally, since the grocer started actively asking its followers on Twitter and Facebook for feedback, suggestions and ideas starting in about mid-2009 - which Fresh & Easy responds to well on the social media sites -one of those frequent suggestions from shoppers has been that it accept manufacturers' cents off coupons. And as more and more grocers adopt mobile, digital coupons in Fresh & Easy's market regions, more shoppers have also been suggesting that it to accept the paperless coupons.

Tesco's Fresh & Easy doesn't want to accept paper of any kind. In addition to not taking paper manufacturers' coupons, the stores accept no paper personal or payroll checks or WIC Vouchers, the check-like government vouchers given to poor mothers. They do accept their own paper Fresh & Easy store coupons however.

The grocer believes the labor savings from not accepting paper checks, WIC Vouchers or manufacturers' coupons in its stores outweighs the benefits of taking them, even though virtually all of its major competitors do take all of the above.

A mobile couponing system that accepts digital manufacturers' coupons would, if it can be technologically adopted given Fresh & Easy's limitations as we described above, allow the grocer to at least capture some of the business from coupon shoppers it's not getting in its stores that it's giving away to competitors, virtually all of which welcome and accept paper manufacturers' cents-off coupons and increasingly are adopting their own mobile, digital couponing systems. And, there's a substantial amount of business from frequent coupon clipper-users out there.

We've said in numerous pieces in Fresh & Easy Buzz over the last two-plus years that Tesco's Fresh & Easy is making a huge mistake by not accepting manufacturers' cents-off coupons of all types - traditional paper, paper coupons clipped out by consumers via internet sites, and mobile, digital coupons.

It's been, and remains, our analysis that Tesco's Fresh & Easy is missing the boat by not accepting all forms of these manufacturer-issued coupons in its stores, particularly in light of the fact that consumer use of the coupons, including traditional paper ones, has soared over the last two years, and is expected to increase again in 2010.

We believe one sign that Fresh & Easy has decided not to go forward with a mobile system that would allow it to take digital manufacturers' coupons is if the grocer comes out with a digital version of its current paper store coupons, which are distributed regularly via the web, and in paper format by direct mail, and sometimes in the stores.

It's our analysis that if Fresh & Easy does this anytime soon, it will mean, at least for the foreseeable future, it has no plans for a mobile couponing program which would allow the grocery chain to accept digital versions of manufacturers' cents-off coupons in its stores.

[Readers: Click here and here (plus, see the links there) to read a selection of past posts from Fresh & Easy Buzz about the manufacturers' coupon phenomenon, mobile coupons, digital coupons and related issues and topics.]
Posted by Fresh & Easy Buzz at 7:55 PM