A Can-Do 'Canstruction' Project in Arizona: Building Giant Structures of Art Out of Food Cans to Fight Hunger 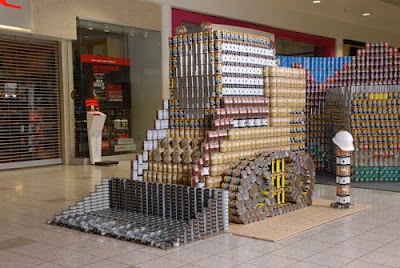 The 2009 'Best Meal' top-winner in Arizona's 'Canstruction' project to fight hunger was 'CAN You Dig It?' (the canned goods'-constructed bulldozer pictured above) by the Form Design/Kendle Design Collaborative/Ryan Companies designer-builder group. More about it here. Do you "Dig it?"

Since 2007, the Society for Marketing Professional Services Arizona, the Arizona chapter of the national Society of Professional Marketing Services, has held its "Canstruction" to fight hunger canned food design-build competition in Metropolitan Phoenix.

The project combines the competitive spirit of a design-build competition with a unique way to help feed the hungry.

Competing "Canstruction" teams, led by architects, engineers and contractors, showcase their talents by designing and building giant structures made entirely out of canned foods, according to the Arizona organization.

The canned goods structures aren't mere "structures," by the way. Rather, they're works of real canned foods art.

After the event is judged, all of the canned food items used to build the structures are donated to Arizona's St. Mary’s Food Bank Alliance, which is considered to be the first food bank in the world.

The 2010 "Phoenix Canstruction Competition" started on February 19, when all of the "build teams" started constructing their canned goods structures beginning at 9 pm. Yes, it's was an all-nighter. The teams have just 12 hours to build their structures, meaning the build must be completed by nine the following morning.

Beginning the very next day, February 20, and running until February 27, all of the canned food-constructed structures were on display at the Fiesta Mall in Mesa, Arizona, which is a suburb of Phoenix. The structure-building takes place at the mall.

The winners of the canned goods design-build contest were judged on February 24.

Three days later on February 27, the impressive structures built completely out of canned goods were torn down, with all of the canned foods donated to St. Mary's Food Bank. (Read more and view a video here.) The canned food from the structures amounts to the largest-single donation for the Arizona food bank for the year.

This year Tesco's Fresh & Easy Neighborhood Market, which has 31 of its 148 small-format Fresh & Easy fresh food and grocery stores in Metropolitan Phoenix Arizona, was one of the three lead-sponsors of the local "Canstruction" competition to fight hunger. All of the sponsors are listed here.

The competition presents awards to the design/build teams in a variety of categories. 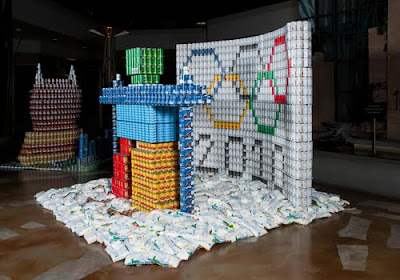 For example, this year's winner in the "Best Meal" category is the SmithGroup/DPR/JJRFloor design team's "Giving is Winning" masterpiece (pictured above), which took as its inspiration the 2010 Vancouver Olympics. Below is how the team describes its creation:

"In honor of the 2010 Vancouver Winter Olympics (February 12-28), the SmithGroup/DPR/JJRFloor design team has created a nutritious structure of the official 2010 Winter Olympics logo: Ilanaaq the Inunnguaq, backed by a wall of the symbolic Olympic rings. Based on the stone landmarks or cairns (called Inukshuk) that were built by native peoples of the Arctic region, Ilanaaq is an actual stone structure that is located on Whistler Mountain in British Columbia. Ilanaaq is the Inuktitut word for “friend” and our team has created him and the Olympic wall out of tuna, soup, ravioli, green peas, olives, chili, and more. Comprised of over 5900 cans that will feed many thanks to our generous sponsors, Giving really is Winning for 2010 the SmithGroup/DPR/JJRFloor design team." 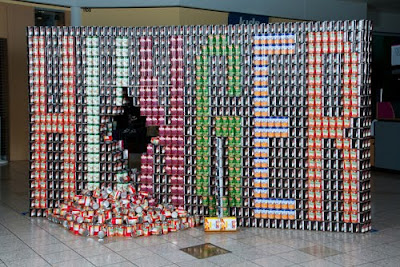 "Similar to the historic 'tearing down' of the Berlin Wall that divided East and West Germany, our can structure symbolizes breaking down the 'wall of hunger' that separates those who are hungry from the food they so desperately need."

You can view pictures of all the winning 2010 canned foods structures, in the various categories, here, along with photos of some of the 2009 competition's winners.

The Society for Marketing Professional Services Arizona, the group which runs the competition each year, was founded in 1983 and currently has more than 200 marketing professionals from the architecture, engineering and construction industry in Arizona, as members.

The Arizona "Canstruction" competition is one of many held throughout the world.

The the Society for Design Administration, (SDA) a design and building industry professional organization, created, runs and sponsors "Canstruction," which it calls "the most unique food charity in the world." Competitions are held throughout North America and in other parts of the world like Australia. Local SDA chapters, like Arizona's Society for Professional Marketing Services, run the competitions locally.

Local businesses, such as Tesco's Fresh & Easy in Arizona, sign on as local sponsors to the various "Canstruction" competitions in the numerous cities where they're held each February.

Local residents are also encouraged to bring canned and packaged food items when they come and view the structures on display, such as was the recent case at the Fiesta Mall in Mesa, Arizona. The community members' food donations are given to local food banks, along with all the canned goods from the deconstructed structures, once the event is over.

The very first "Canstruction" design-build competitions took place in 1992-1993 in Denver, Colorado; Seattle, Washington; and New York, operated by the SDA chapters in those respective cities.

Each year since then, more local SDA chapters, like the Phoenix association, have initiated "Canstruction" competitions to support local food banks and help those in need in their communities.

According to the SDA, since 1992-1993, ten million pounds of food from the annual competitions has been donated to aid in the fight against hunger.

From where we sit, "Canstruction" is about as big of a locally-based, community-minded, business-supported and volunteer-run "CAN-DO," "win-win" as you "CAN" get. We congratulate all those involved in the competitions - in Arizona, throughout the U.S., and all over the world.
Posted by Fresh & Easy Buzz at 1:34 PM