Target on Tap to Put Mini-Grocery and Fresh Foods Markets Into 100 Target Discount Stores This Year; Many More Likely to Come in 2010 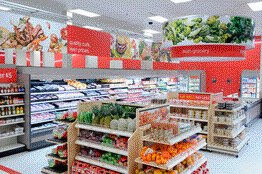 Target Corp. has decided it will include its new store-within-a-store grocery and fresh foods mini-markets (pictured at top) in about 100 new and remodeled Target discount format stores this year, according to recent public statements made by CEO Gregg Steinhafel.

Target operates 1,300 of its discount format stores in the U.S., along with 245 Super Target combination food and general merchandise stores. The two are the retailer's current formats.

The big (generally 100,000 square-foot-plus) Target discount stores already sell a limited assortment of shelf-stable and perishable food, grocery and packaged goods items but don't offer fresh foods such as fresh meats or fresh produce. The addition of the mini-grocery and fresh foods markets in these stores greatly adds to the store's overall food and grocery SKU count.

The Super Target format stores average about 180,000 square-feet and include a full supermarket inside, similar to Wal-Mart's Supercenters.

Target already has opened a few of the mini-grocery and fresh foods store-within-a-store markets inside Target discount stores in the Midwestern U.S., including in Minnesota where the retailer is headquartered and in nearby Wisconsin.

The mini-grocery stores (picture a small-format grocery and fresh foods store but inside of a large Target discount store) carry a limited assortment of fresh foods, including meats, produce, dairy, deli and other perishables.

The mini-market's fresh produce is shrink-wrapped or pre-packaged.

We estimate the mini-markets carry about 2,500 SKUS.

The mini-grocery stores inside the Target discount stores, such as the one pictured at the top of this story, use the tagline "Eat Well. Pay Less."

Target's strategy behind the mini-grocery and fresh foods stores inside the discount stores is to generate more frequent shopper trips to its stores. Since food and groceries are essentials, the hope is that by putting the mini-grocery and fresh foods markets inside the discount stores, Target will be able to capture additional customer dollars, along with becoming more of a destination retailer for shoppers.

Target's same-store sales are down by 2.9% over the previous year. The added focus on food and groceries by Target is aimed directly at stemming this loss in same-store sales, which is a very important criteria in retailing.

Additionally, the consumables strategy is a part of Target's larger effort to increase its focus on food and grocery merchandising across the board in the current recessionary climate in which there has been a flight of shoppers to rival Wal-Mart and other more deep-discount-oriented retailers.

Target has been and continues to add additional shelf-stable and perishable grocery items in all of its 1,300 discount format stores. But only the stores with the mini-grocery and fresh foods in-store markets will feature fresh cut meats, fresh produce and the expanded grocery selection.

In the recession consumers have cut back significantly on non-essential product purchases, which are the categories that brought much success to Target from the mid-1990's to just a couple years ago.

As a result, like so many other retailers, Target Corp. is refocusing its efforts, putting a greater merchandising and marketing emphasis on essential consumer packaged goods items, particularly food, grocery and related categories.

The mini-grocery and fresh foods markets inside the Target Discount stores are key to this strategy for the retailer because it has an established base of 1,300 discount format stores in which it can install the food markets.

Target said earlier this year that it plans to put the mini-grocery and fresh foods markets inside most all of its new discount format stores and in virtually all of those already scheduled for remodeling.

The chain also said that after this year, once it has the first 100 grocery and fresh foods mini-grocery shops open, it will then consider adding the store-within-a-store mini-markets to all of its 1,300 Target Discount stores in the U.S.

If the retailer does that, it will add a considerable amount of new grocery and fresh foods square footage to the already substantial amount of retail food and grocery square-footage in the United States.

A handful of the 100 in-store mini grocery and fresh foods markets slated for this year are expected to go into new or remodeled Target discount stores in California, Nevada and Arizona, which are the three states where Tesco operates it 120 small-format, convenience-oriented grocery and fresh foods markets. The Fresh & Easy markets are located throughout the Southern California region and in Bakersfield in California, in southern Nevada, and in the metropolitan Phoenix, Arizona region.

The Target mini-grocery and fresh foods store-within-a-store markets and Tesco's Fresh & Easy stores have much in common in fact.

For example, both formats or concepts offer a limited assortment of fresh foods and grocery items. Both offer pre-packaged fresh produce. And both operate on the concept of convenience-oriented grocery shopping.

In Fresh & Easy's case that convenience is in the form of a free-standing market located in the neighborhood. In Target's case it's the concept of locating a "small-format" grocery and fresh foods market inside its large target Discount format stores.

A major difference between the two of course is that Tesco's Fresh & Easy markets are free-standing stores, while Target's grocery and fresh foods markets are located inside a Target discount store.

Minneapolis, Minnesota-based Target Corp., which operates stores only in the United States, had 2008 sales of nearly $64 billion.

Food and groceries accounted for about 37% of that total revenue, according to the company, placing Target among the top-10 retailers of food and groceries in the U.S., based on annual gross sales in the categories.

Target Corp. if ranked as the fifth-largest overall retailer in the U.S. Wal-Mart is number one, followed by Home Depot, Kroger Co. and Costco.

Doesn’t SuperTarget have full-scale grocery section already? Almost every Target stores is being super-sized here in Texas – similar with Walmart (one word, that is) recently changed its colors from blue and red to blue and yellow.

It says right in their post that Super Target has a supermarket inside.

This sentence:"The Super Target format stores average about 180,000 square-feet and include a full supermarket inside, similar to Wal-Mart's Supercenters"

Maybe when the goofy Texas Governor has the state suceed from the union like he suggested Wal-Mart can provide economic stimulus since Texas will be a nation state.

I live in Orange, the Target in the article is smack in the middle of two F&Es.

The Super Target stores are similar to Walmart's supercenters. Super target stores include a full supermarket selection in them.

The 10K-12K P-fresh grocery sections, which feature produce, meat, deli, bakery, perishables, frozen and dry grocery, are going in target's discount fromat store, which is it's primary U.S. format. There are about 240 Super Target stores in the U.S. About 1,500 discount stores in the U.S.