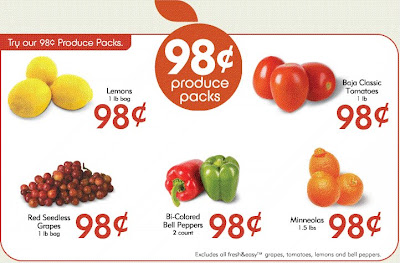 On January 27, 2009 we wrote and published this piece [Tesco Fresh & Easy's 'New' Advertising Flyer: Minimalism Without Thought or Design Does Not A Retail Advertising Communications Piece Make] in which, among other analysis and suggestions offered, we suggested that the fact Tesco's Fresh & Easy Neighborhood Market had changed to a black ink on cheap plain white paper advertising flyer, from its previous color promotional flyer, was probably not a good idea, to say the least.

The title of the January 27 story says it all. In the piece we offered that there is nothing wrong with minimalism when it comes to advertising flyers, particularly in hard economic times like the present, as long as it is what we term "minimalism by design." That's opposed to "minimalism by default."

However, the two black ink on inexpensive plain white paper flyers we discussed in the piece were completely without design. Therefore, we suggested Fresh & Easy needed to go back to the computer graphics program or layout table and create something at least a bit more graphically attractive, and include at least one or two colors in the advertising flyer.

Tesco's Fresh & Easy did just that with the supplemental advertising flyer it distributed about two weeks after our story was published on January 27.

In addition, Fresh & Easy has issued at least three -to- four advertising flyers since that one, and all have at least two colors, and at least have some thought given to the layout. In other words, they look much better that the plain white paper flyers we analyzed and critiqued in our January 27, 2009 piece.

The advertising flyers since then have a layout similar to what we suggested in the January 27 story, although they still need work to make them easy to read and more marketable. The flyers now also include color, green and red most recently, against the white backdrop.

As we reported and wrote about in this March 11, 2009 piece [Fresh & Easy Buzz Redux: Tesco's Fresh & Easy Changes its Promotional Advertising Flyer to 'Weekly;' Something We've Been Suggesting For About A Year], Tesco's Fresh & Easy Neighborhood Market has now changed to a once-a-week advertising flyer, which is something we first suggested it needed to do about one year ago. [The new weekly ad, March 18-24 is out today, here. Produce here.]

Now that the grocery and fresh foods chain is using a weekly ad flyer like all of its competitors are, it won't need to issue so many (if any) direct-mailed, paper supplemental ad flyers like it's been doing as a way to attempt to stay current because its previous advertising schedule was one ad flyer about every three weeks.

Additionally, now that Fresh & Easy is producing and distributing a weekly advertising flyer, it needs to produce a quality piece. It can be minimal -- in fact their might even be a certain cache to doing so -- but it needs to be "minimalism by design," not by default.

A perfect example of "minimalism by design" when it comes to grocer advertising flyers or circulars is Trader Joe's famous "fearless flyer." The TJ's ad flyer is printed on very inexpensive paper, newsprint basically. It is minimal in its look -- but by design.

The Treader Joe's "fearless flyer" contains mostly black ink pen-style artwork and generally uses only one other color (most often red) in its pages. The flyer is really more a booklet. But it is inexpensive to produce.

And the design of the flyer fits Trader Joe's quirky (by design) image: the names of its store brand products, the way the store employees dress, the look of the stores, and the like. That's integrated merchandising and marketing. That's what marketing communications is supposed to be. Advertising flyers need to be a part of that whole, not something different each week.

Tesco's Fresh & Easy now has a chance, with its now weekly ad flyer schedule and frequency, to produce a low-cost, high-impact, attractive paper advertising flyer similar to what we've previously suggested it could and should do.

By attractive we don't mean it has to be high-quality or fancy. Remember "minimalism by design" is just fine. But like the Trader Joe's "fearless flyer," which is minimal, but also is attractive, so too can Fresh & Easy design one that meets those dual criteria.

Fresh & Easy needs an advertising flyer that fits its overall image -- is a part of that image. The grocery chain needs to come up with a design and then stick with it. Advertising communications is best when it's integrated and consistent. Tweaks are fine but not wholesale changes each week.

Like they say, you only get one first impression.

We've had many readers tell us the plain white, and even the slightly better versions we described above (the ones after our January 27 story), Fresh & Easy flyers often go right in the circular file or recycle box because they look like junk mail. There's a reason grocery chains like Safeway Stores, Kroger and others make their weekly advertising circulars or flyers as attractive as they can within budget. That reason is that the food retailers want consumers to not only look at the promotional pieces -- but read and use them to do their grocery shopping, as well.

Up until the first of this year, Tesco's Fresh & Easy produced and distributed fairly attractive paper versions of its ad flyers. Then they changed them in January, most likely to save money. Saving money is fine. But being penny-wise but pound foolish isn't smart. Fresh & Easy needs to find a happy and economic medium between its previous graphically attractive advertising flyers and the ones it's currently producing and distributing (the paper, direct-mailed versions.)

It appears to us that since we wrote the January 27, 2009 piece, the grocery chain has been experimenting with its advertising flyers. They have improved. But they could improve much more. Minimalism is great -- just as long as it is by design rather than default.

And more important, Tesco's Fresh & Easy needs to decide on an advertising flyer design (at least a basic design) and then stick with it. And as we said earlier, it needs to be integrated with the chain's overall merchandising and marketing. We look forward to seeing what develops.
Posted by Fresh & Easy Buzz at 6:54 PM