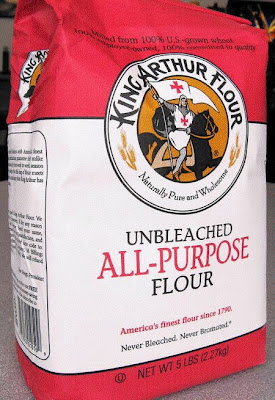 Food and Grocery Merchandising in a Land Called America

King Arthur brand Flour is considered by the culinary-informed to be arguably the finest quality baking flour in the land.

Not so many years ago finding King Arthur Flour at retail was quite a chore, it then generally being sold only at specialty stores and more upscale and specialty foods-oriented supermarkets. You know, those us common folk only shop at on special occasions.

Despite that fact, many King Arthur brand-loyal subjects (consumers) in the land called America sought out the flour anyway, often traveling for many miles in their four-wheeled chariots to a store that sold King Arthur Flour. Others went right to their local grocer and asked him to carry it, which many then did -- and do.

But then the bakers, the packagers and the marketers that comprise the King Arthur Flour company -- which is employee-owned -- joined forces with what then was a small chain of specialty grocery stores named Trader Joe's. The Trader and the King; a perfect match thought many of the loyal subjects of the brand.

Then like bread dough rising on a warm cupboard, Trader Joe's grew and grew, in the process introducing more and more subjects in the land called America to the King Arthur Flour brand -- and making it easier for the brand's already many brand-loyal subjects to get their King Arthur Flour closer to home, since Trader Joe's was spreading throughout the land. And unlike at the upscale stores, subjects of all classes trade with the Trader.

And as Trader Joe's grew in size, popularity and store-count, other grocers throughout the land -- not just the upscale royalty of the food retailing world -- also started carrying King Arthur Flour on their store shelves. What was once royal in terms of retail distribution was becoming much more common.

But the Trader still stood alone as a key retailer of King Arthur Flour. And for years the relationship between the employee-owned company and the specialty grocer thrived.

But alas, like happens in many relationships, King Arthur and the Trader are now parting company. Trader Joe's has decided to stop carrying King Arthur Flour in its about 304 specialty grocery stores located throughout the land called America.

Below (in italics) is what the "Baker-Bloggers" at King Arthur Flour are saying about the end of the Trader Joe's relationship this week in a post titled, "Say it ain't so, Joe's," in their "Bakers' Banter" company Blog:

"Breaking up is hard to do.

Just ask all of us here at King Arthur Flour. We’re suffering the heartbreak of a broken relationship.

We’ll survive. Everyone does. And someday we’ll think back on this time with fond nostalgia.
But right now, it hurts.

A number of years ago, when King Arthur Flour wasn’t a widely known national brand, we joined forces with a not-quite-ready-for-prime-time grocery chain. It was a match made in heaven. We needed distribution in other areas of the country; Trader Joe’s needed a quality flour to anchor their baking aisle.

We started a business relationship.

And the rest, as they say, is history.

King Arthur Flour, thanks in part to our exposure in Trader Joe’s, is now available at supermarkets across the land. Wherever you live, there’s a market selling King Arthur Flour somewhere fairly close by."

But wait... As they say, when one door closes, perhaps a new one opens?

About 18 months ago a grocer from Britain, a land that knows a thing or two about Kings, road into America and opened its first small-format combination grocery and fresh foods stores, which many say are one-part Trader Joe's and one-part mini-Costco's. And they aren't just for royalty either. Rather, the stores welcome the masses, boldly proclaiming "Fresh & Easy is for everybody."

Today that grocer, Tesco's Fresh & Easy Neighborhood Market, has 115 of those little (10,000 -to- 13,000 square-feet) grocery stores -- not as many as Trader Joe's (yet), and the Fresh & Easy stores are only in three states -- California (Southern California and Bakersfield so far), Nevada (Metropolitan Las Vegas) and Arizona (Metro Phoenix) -- but its a fast-growing chain, despite its current struggles.

And in the United Kingdom, the mighty Tesco, who's CEO, Sir Terry Leahy, has been knighted by Britain's Queen, is the King of all grocer's, controlling a whopping 30% of all food and grocery sales in that land of the royal -- and the not so royal.

And across the globe, in that great British flair that once found the UK sitting on top of the world as a great Empire, Tesco (the world's third-largest retailer) is marching, trailing only Wal-Mart (number one) and France's Carrefour (world's second-largest retailer) in the battle for global retailing domination.

So we posit -- might King Arthur's ending its relationship with Trader Joe's be a "royal" opening for Tesco's Fresh & Easy to ride in and stock the renown King Arthur Flour in all of its stores in California, Nevada and Arizona -- many of which are located very close to Trader Joe's markets -- thereby pleasing the legions of brand-loyal King Arthur Flour customers who soon will no longer be able to buy the product at Trader Joe's? And might we add, in the case of Fresh & Easy, making an extra buck or two, along with creating some potential customer loyalty, as well as perhaps offering a bit of a royal poke at Trader Joe's.

One door closes -- another opens.

We would jump on the opportunity right away. King Arthur Flour has some of the most brand loyal customers of any niche brand in the U.S. [You can get a hint of that strong consumer brand loyalty by reading the reader comments on the post in the King Arthur Flour Company "Bakers' Banter" Blog here.]
Posted by Fresh & Easy Buzz at 5:01 PM

I'm a long time customer at the TJ's in Manhattan Beach, CA, where I regularly buy King Arthur Flour. I only sometimes shop at the Fresh & Easy across the shopping center If Fresh & Easy brings in King Arthur, count me in as a more regular customer.

Does this mean I as a exiled Pennsylvanian will be able to buy a decent flour here in England at my localTescos?