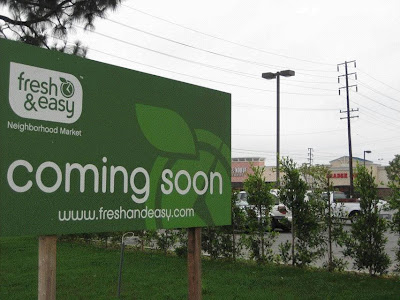 The McKenna Long & Aldridge (MLA) law firm, which through its California real estate division is handling all of Tesco Fresh & Easy Neighborhood Market's property leasing and real estate development legal work for its stores in California, Nevada and Arizona, has hired 17 new lawyers for its Los Angeles office, 11 of which will work in the firm's real estate practice, in part because of the volume of business from Tesco's Fresh & Easy.

The new hires come from a boutique law firm in Los Angeles, which had a major real estate practice focus, that went out of Business on February 25.
McKenna, which has one of the top real estate practices in California and nationally in the U.S., acquired the small law firm, Brown Winfield Canzoneri Abram, after the firm went out of business and closed its doors for good on February 25. MLA acquired the firm the next day, according the law firm.
The attorneys joining MLA's real estate practice from the Brown Winfield firm include: Steven Abram, James Camp, Tony Canzoneri, Gordon Eng, Wendy Glenn, Geoff Mitchell, Bill Pham, Dennis Roy, and Mark Steres, all as partners; along with Ken Brown, senior counsel, and Donald Ries, of counsel.
"These lawyers are a perfect fit with our existing real estate practice and, with the stimulus bill emphasizing shovel-ready infrastructure projects that require our joint expertise, the timing could not be better," says McKenna's chairman, Jeffrey Haidet.
"The Brown Winfield lawyers are recognized leaders in public/private partnerships, real estate, eminent domain, environmental regulation, finance and land use - these are all issues that will be at the top of the list in today’s challenging environment."
McKenna Long & Aldridge is a U.S.-based international law firm which currently has about 470 lawyers and public policy advisors working for it. About 440 are lawyers. According to the firm, about one-third of those 440 lawyers work out its Los Angeles, San Diego and San Francisco offices, in California.
MLA has offices in: Los Angeles, San Diego; San Francisco; Washington, D.C.; New York City; Albany, New York; Atlanta; Denver; Los Angeles; Philadelphia; and Brussels, Belgium.
With the 11 new hires for its real estate practice, McKenna says it now has a total of 65 lawyers in its national real estate practice, with 30 of those real estate specialists working out of the three California offices mentioned above.
Most law firms with real estate practices on the west coast, particularly in California, aren't hiring or growing because of the current near-complete halt of commercial and residential development due to the financial-credit crisis and economic recession.
Unlike many law firm's though, MLA has a few big clients, like Tesco's Fresh & Easy, that are still relatively aggressive in their real estate acquisition and development activity despite the financial crisis and recession, in large part in Tesco Fresh & Easy's case because of the high-volume of new store sites it had in the pipeline already before the financial crisis and recession became full-blown.
McKenna also does a considerable amount of work, as a number of other law firms do, in the area of public-private partnerships, which includes real estate projects. The public aspect is government.
Since the U.S. Congress passed, and President Obama has signed, the nearly $1 trillion economic stimulus bill, which includes hundreds of billions for public-private development projects designed to create jobs and stimulate the U.S. economy, there has been a rush by law firms with real estate practices to get in on the ground floor of these so called "shovel ready" projects as they are lined up by the federal, state and local governments.
The stimulus bill-funded real estate and related projects will be contracted to private companies. And the projects, like all real estate development projects, will have a considerable amount of legal work involved in making them happen.
Since the commercial real estate business is so slow in California, the west, and throughout the country right now, law firms are hoping the stimulus-funded public-private projects can replace some of their lost revenues from the building and development halt brought on by the financial-credit crisis and recession.
McKenna has even created a special "Economic Stimulus" practice area as part of its gearing up for the potential big dollars involved in the public-private real estate projects to be funded by the stimulus money.
MLA also recently made a very high profile hire for its governmental affairs practice based out of Washington, D.C. The firm has hired the recently departed national chairman of the Democratic Party, former Governor of Vermont, and former 2004 Democratic candidate for President, Howard Dean, according to the law firm.
Dean, who is a physician, will be based in the firm's Washington, D.C., office as an independent consultant (not full-time with the firm), and will serve as a strategic adviser to its health care and energy clients, says Eric J. Tanenblatt, who heads McKenna's national government affairs practice.
Since health care reform is a major agenda item in President Obama's just-presented budget, it looks like the law firm made a good hire in that regard.
Doctor Dean ran for President in 2004, having health care reform as one of his top campaign issues.
As national chairman for the Democratic party, Howard Dean is credited with helping to create the national strategy that helped get President Obama elected, along with electing more Democrats to the House and Senate, where Democrats hold a majority in both bodies.
Before Dean became party chairman, past Democratic candidates for President tended to run a "blue state" regional strategy. Candidate, and now President, Obama campaigned in most all of the "red," or traditional Republican, states, winning a number of them.
From the first day he took office as party chairman in 2005, Dean advocated and created the party strategy for a national rather than "blue state" Presidential campaign for 2008, something Obama and his team agreed on and based the successful campaign on both independently of and in cooperation with Dean and the national party.
And in terms of the 11 new real estate attorney's (out of the total 17 new lawyer hires) hired by McKenna Long & Aldridge for its California real estate practice, it looks like major client Tesco Fresh & Easy will get some added legal expertise on its account. But -- can they help Tesco Fresh & Easy Neighborhood Market sell more groceries?
Posted by Fresh & Easy Buzz at 12:21 AM

Good to hear MLA is managing to gain clientele in this tough climate, very comprehensive post!

I just knew the law firms would be jumping all over the economic stimulus money. Have give them credit though for having a nose for opportunity, even if it is taxpayer-funded.