Consumer Use of Manufacturers' 'Cents Off' Coupons Continues to Grow: The Latest American Rage: Home Coupon-Clipping and Coupon-Trading Parties 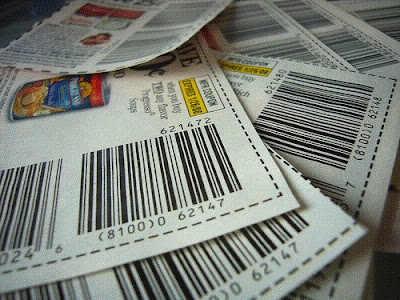 Fresh & Easy Buzz has written regularly over the last few months about the growing trend among American consumers during this deep economic recession to increasingly use manufacturers' "cents off" coupons at the supermarket, as well as at drug and discount stores, as one way to save money on food and grocery purchases.

We've also written about the increasing use and distribution of the coupons, part of this same trend, among food, grocery and consumer packaged goods companies and marketers, which includes offering far more coupons than ever before online via Internet Web sites dedicated to the "cents off" coupons. The number of such coupons Web sites and Blogs has soared in the last year, as the use of the coupons by consumers soars along with the sites. [Here are just a handful of such sites: coupons.com, couponcabin.com, couponcode.com, couponmom.com, 8coupons.com, fatwallet.com and shortcuts.com.]

Supermarkets and drug and discount stores that except manufacturers' "cents off" coupons -- which is nearly 100% of such format stores in the U.S. -- are reporting that shoppers are using the coupons at about the highest volume they've seen in many decades -- if not ever.

Additionally, numerous supermarket chains, such as Fry's, Albertsons and others in Arizona, Nevada and Southern California, where Tesco has its 112 Fresh & Easy Neighborhood Market combination grocery and fresh foods stores, are offering to double and triple, and even at times quadruple, the value of the manufacturers' coupons for shoppers as a way to gain business.

We've also noted that since Tesco's Fresh & Easy Neighborhood Market doesn't except the manufacturers' "cents off" coupons from shoppers in any of its stores, it is, unlike every one of its major competitors who except the coupons, missing out on a substantial and considerable amount of business and thus sales from the millions of consumers in Southern California, Nevada and Arizona who are using the manufacturers' coupons and therefore won't shop at stores that don't accept the discount pieces of paper, or will exclude buying items at Fresh & Easy that they can buy elsewhere using a manufacturers' coupon.

The use of manufacturer's "cents off" coupons by consumers looking to save whatever money they can at the grocery store has rapidly increased over the last six months, and continues to increase at the present. A resent survey conducted by the Promotional Marketing Group, the trade group that represents the coupon industry, for example, reported a significant increase in the last year in the number of people who say they are using the coupons in surveys conducted by the organization.

Now, in a sign that the use of manufacturers' "cents off" coupons is becoming "off the charts" among American consumers, as we've been saying is the case since early 2008, welcome to one of the hottest ways to party in recessionary America -- the home coupon clipping party.

That's right, across America people are getting together in each others homes and holding parties centered around the clipping and trading of manufacturers' "cents off" coupons, the premise of such parties being to save money on food and groceries in these hard economic times -- and to have some inexpensive fun doing so. We suspect most of the refreshments for these "coupon socials" are being purchased using the discount coupons, keeping in the theme of the events. The invitation perhaps: Come on over and 'Get Your Coupon On."

But you don't have to take our word about the fast-growing coupon-clipping and coupon-trading house parties. You can view some video of people having such parties at the link below:

Click on the link in green to watch the video: Americans throwing coupon parties to save on groceries.

More on the manufacturers' "cents off" coupon trend:

Below is a selection of recent stories we've written and posted about the growing manufacturers' coupon use trend, and the related use of store coupons by grocers: