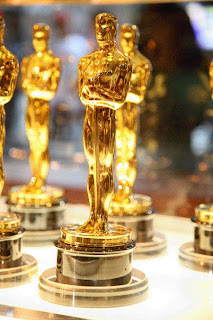 Tesco's Fresh & Easy Neighborhood Market, which just happens to have one of its small-format, convenience-oriented, combination grocery and fresh foods stores located on Hollywood Blvd, in Hollywood, California, just down the street from the Kodak Theatre where the Academy Awards ceremony will be held and telecast from this Sunday night, just issued this press release:

Title: The Glitz and Glam of Hollywood on a Budget:
Fresh & Easy Shares Creative Party Ideas for the Movies' Biggest Night

We've been critical of many of the grocery chain's marketing communications-oriented press releases in the past, on the grounds of at times not containing any news, of being mundane, and of poor timing, along with a few other problems.

But we think Fresh & Easy did well with this one. It's creative: Carrie Wick, the west coast publicity director for Fingerprint Communications offers some "out of the box" and fun ideas and tie-ins between Fresh & Easy food and grocery products and the Oscar telecast.

She also offers some creative and inexpensive decor ideas -- value -- for people at home watching the awards show. Ms. Wick also focuses the Oscar night food menu on value, something that's a must for most consumers right now.
Additionally, the ideas and suggestions in the release are done with a sense of fun, which is just what people want to have watching the awards show together at home.
Lastly, the overall key theme of value (good timing) doesn't get in the way of also suggesting fun. In fact, Ms. Wick's suggestions do a pretty good job of creating the impression that inexpensive entertaining can be fun.

The timing of the release by Fresh & Easy also is good, in our analysis and opinion. Coming out today allows a couple to three days to generate media attention on the release. But if it came out Monday that might have been too early to hit the Oscar Night editorial news cycle. Of course, as with a movie, the real reviews for the press release will be if it gets some decent play, particularly in the consumer-oriented media in Southern California. We think it just might.

I do wish the team who does the press releases would send something out to the stores about them. I'd have loved to be sharing this with my customers.

We've heard in the past from numerous store employees that Tesco's Fresh & Easy doesn't integrate its PR (sending out press releases) function with its merchandising and store-level operations. For example, we heard it from at least three employees regarding the PR promotion of the meat grill packs most recently in January, as well as on numerous occassions in the past.

The fact the grocer fails to do this is a missed opportunity. After all, it does no good to promote products tied to an event like the Oscars if the stores aren't aware of the PR push. Retail is where it happens in food retailing -- as any experienced grocer knows, regardless of chain size.

This problem is also a part of what we've been writing about since shortly after Tesco opened the Fresh & Easy stores in late 2007. That problem is the failure of the grocery chain at headquarters level to operate an integrated, solid and comprehensive marketing plan and program.

Making sure the stores know well in advance of any PR push is just plain old marketing 101. And in grocery retailing it's plain old common sense.

With the Internet today there is no reason that store-level people can't be made aware of things like PR releases in real time, with the store manager instructed to share the info with all of the stores'
employees. Letting the stores know a day or two in advance is even smarter.