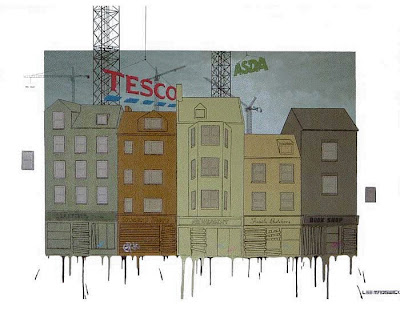 The painting above, titled: 'Every-Little-Helps-Tesco!!!,' is by United Kingdom-based Artist Lee Madgwick. For information about Lee Madgwick's art, go to the artist's Web site here.

United Kingdom-based Tesco, which owns and operates El Segundo, California-based Fresh & Easy Neighborhood Market, is the number one food and grocery retailer in the UK. It's also the third-largest global retailer; after number one Wal-Mart Stores, Inc. and France's Carrefour chain. Up until now, Tesco has controlled a whopping 31.2% of the food and grocery sales market share in the UK. By contrast, its closest rival, number two Wal-Mart-owned Asda has had a 16.9% market share, followed by number three Sainsbury's with a 16.3% share, and number four Morrisons with an 11.7% share of the UK food and grocery sales market.

[Notice that the top four UK chains control a massive 76% of the total food and grocery sales market share, leaving just 24% of the market left to fight over by the nation's numerous other chains, such as the Co-operative Group (fifth-largest), Waitrose, Marks & Spencer, Aldi, Lidl, Iceland and others. That's far higher than what the top five U.S. chains --Wal-Mart, Costco, Kroger Co., Supervalue, Inc. and Safeway control combined. That's because the U.S. food and grocery retailing industry is far more decentralized and regional in nature than in the UK. For example, in major U.S. markets like Florida (Publix), Texas (H-E-B) Central California (Save Mart and Raley's) and numerous others, it's regional chains (like those mentioned in parenthesis) that are the market share leaders rather than any one of the top five U.S. chains.]

Over the last year though Tesco has been losing some of its market share in the UK. It's still the King by a huge margin. But in the food and grocery retailing business, where every single percentage point adds up to big dollars, losing even a half-percent share is troubling news to a retailer.

The latest figures from global retail market research firm TNSWorldpanel show that Tesco has been steadily losing market share to its rivals in the UK.

Just published date from TNSWorldPanel shows that in the 12 weeks to January 25, 2009, Tesco's market share was 30.7 per cent - down from 31.2 per cent in the same period a year earlier, according to a report/story in today's London Times.

In contrast, the TNSWorldPanel analysis shows that Wal-Mart-owned Asda's market share rose from 16.9% to 17.2% over the same time period, while Morrisons' share rose from 11.6 per cent to 11.9 per cent. Sainsbury's share basically held steady.

Other grocers taking share away from Tesco in the UK include the fast-growing but still small in terms of UK store count Germany-based small-format, hard discount chain Aldi.

When social networking meets bricks and mortar: World travel via Twitter inspired in the aisles of a UK Tesco supermarket: Meet Britain's Paul Smith, otherwise known as the "Twitter Twitchiker": Here's what he says: "Twitchhiker was born among the aisles of Tesco, where the queues of dawdling customers had me yearning for a place far away. Having vented my frustration by tweeting on my mobile, I recalled a fleeting thought I'd had several months earlier: would the Twitter community support me if I tried to flee the North East and travel the world?" Mr. Smith is doing just that -- traveling the world with just the assistance of people he communicates with via the micro-Blogging, social networking site Twitter.com. [Read what he's up to @ - UK Guardian: The Twitchhiker: one man on a Twitter travel mission]

New Jobs - Good News for the UK: [Jobs News Wire.com - UK: Thousands of jobs announced by retailers. Tesco says will create 10-K jobs in UK this year. If so, the retailer will likely create more jobs than any other UK employer this year. Wal-Mart-owned Asda, other top chains to create thousands of new jobs as well.]

[Guardian.co.uk: Is Britain running out of food? Right-wing thinker Phillip Blond's prescription for a radical "red Tory" manifesto includes breaking up Tesco for the good of consumers, producers, high streets and jobs. But Phillip we ask, what about the 10,000 new jobs Tesco plans to create this year? Do you have an alternative?]

Bloggers-At-Large on Fresh & Easy:
[FRESH and EASY…I’m hooked! A great place to food shop... Blogger Jude (Sweet Cottage Charm Blog) loves Fresh & Easy. But why all the advertising-like text (including the TM's, ect.) in the post? Just wondering?]
[Northgate is out - and food trucks are in, at former Ralph's ... Orange Juice Blog.com. Blogger Art muses on Tesco's Fresh & Easy and other supermarkets.]